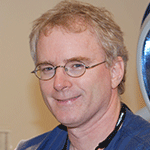 Given the speed of change of medical information, most of the books I accumulated as a medical student rapidly became worthless, the exceptions being those on anatomy and embryology. To be a surgeon is to be an anatomist; to be a pediatric surgeon is to be an embryologist.

There is an interesting embryology exhibit at the Museum of Science and Industry in Chicago—a row of human fetuses in jars at every week of gestation. A good exercise is to walk down that row of jars, start to finish, and point to one and say: “Ah, this is no longer a clump of cells. This is a human being.” Making that choice is of course impossible, as gestation is a continuum.

Abortion was not something that was much discussed when I was a medical student. I remember a lecture in which a preening gynecologist stated that he had advised a couple to abort their child who had a 25% chance of having a fatal autosomal recessive disease, and they had consented. The guy next to me whispered in my ear, “Why not deliver four of their pregnancies and kill the one baby with the disease? You’d get three instead of zero.” During my OB-GYN rotation, I watched a monstrous-looking, term anencephalic infant struggle to breathe and eventually die. I’m not sure if that baby suffered or not, but no one held it as it took its last breaths. Mom had refused an abortion. Abortion is a subject that certainly makes one think.

At its core, elective abortion is the intentional termination of a healthy biological process. In 1973, the nine clumps of cells otherwise known as justices of the United States Supreme Court figuratively walked down that row of jars and arbitrarily pointed to a spot on the continuum and declared the moment at which life begins. The basis of their argument was viability which, not surprisingly, eventually collided with neonatal care, rather like Social Security colliding with longevity. Somehow those justices missed the moral absurdity of heroically resuscitating a 24-week baby in the NICU while aborting another 24-week baby in the clinic down the street.

Abortion is back in the news because it is back in the courts, and the nation awaits the Supreme Court’s latest take on the subject. A reversal of Roe v. Wade will not outlaw abortion; it will merely return the rulemaking to the various states, taking the decision from the hands of nine judges with lifetime appointments and no accountability, and handing it to millions of citizens and their accountable representatives. Some people evidently do not trust the democratic process, but the alternative, a society ruled by judicial fiat, does not seem like a better alternative.

After that “stroll along the jars” is performed by the legislators and governors of the nation’s state houses through an updated prism of technology, ethics, neonatal care, and human embryology, the consensus moment of cellular-human transfiguration will likely be shifted earlier in the continuum of gestation. There will of course be noisy debates and arguments about the moment of conception, heart beats, and the perception of pain. One hopes that everyone talking remembers that we all sometimes need someone else.

Abortion is not going away. Americans have a long tradition of compromise, and we will no doubt figure out the ground rules for abortion. Many people will be unhappy. Assuming that Roe v. Wade is reversed, it is doubtful that the product of the legislature of Alabama will resemble that of California’s. To what extent will we physicians, as professionals, be involved in the rulemaking, or will we again be sheep among wolves, discussing the dinner menu? Physician opinion about abortion is as varied as that of the general population. The future rules will vary by state, and it is critical that physicians’ voices are heard during the debates over the regulation of abortion, a surgical procedure.

Surgical facilities have rules and standards, as do professional surgical societies. To be a member in good standing of the American Society of Plastic Surgeons, one is required to use an accredited operating room to perform outpatient surgery and to have admitting privileges at a nearby hospital in the event of complications. There have been cases of women showing up in the emergency room, bleeding, after an office abortion performed by a physician without hospital privileges. Unless that physician has a coverage agreement with a gynecologist with full surgical privileges, such practice should not be permitted.

In an era when physician extenders are increasingly doing procedures and some physicians are pushing the anatomical boundaries of their training and scope of practice, who will be the abortionists? Some states allow non-physicians to perform abortions. Is this wise?

Many people believe the Hippocratic Oath is silent about abortion and euthanasia. This is false. The oaths recited at modern medical school graduations have been edited and sanitized. After all, who wants to hear about poisons and pessaries on a warm spring day of celebration? In fact, the Oath, as written, is a profound celebration of the sanctity of life, and it is quite clear about abortion.

Physicians should remember that we are in the business of promoting life and health, and that our Oath, the real Oath, says it very clearly. The assault on that Oath began with the eugenics movement one hundred years ago, which gave rise to a global century of forced sterilization and abortion, medical killing and the Holocaust, one child policies, ultrasound-driven sex-selective abortions, abortion clinics targeting poor neighborhoods, and the sale of fetal parts for commercial gain. It has been a project of dehumanization, fought by many and made difficult by ever-improving fetal ultrasound, which does not deceive.

When Will We Finally Speak?

After over two millennia of Hippocratic medicine, physicians have not had a good run in recently memory. Aside from our participation in the aforementioned programs of dehumanization and medical killing, we did not speak when insurance companies inserted themselves into the doctor-patient relationship. We voluntarily surrendered control of the hospitals to administrators who do not take our Oath, and we said little as corporations gobbled up hospitals built by volunteers, nuns, and community bake sales.

We have been seduced and corrupted by government money after buying into the notion that we are unique as service providers, and that our services should be paid by someone other than the recipient of those services. Why, then, are we surprised when that coverage is followed by control, immiserating our working conditions with rules and documentation to prove that we have done what we say we have done?

We permitted our traditional and primary voice, the American Medical Association, to evolve into a medical coding business, fully captured and integrated into the medical industrial complex through its primary source of revenue, the monopoly CPT coding system. According to its Code of Ethics, the AMA is on board with abortion, with lots of CPT codes from which to choose.

Judging by what one reads on social media, we are now hardly trusted by the public. The Covid pandemic has fully convinced many people that we physicians no longer put patients first, and that we have been completely captured by the medical industrial complex. The coming abortion debates give us the opportunity to redeem ourselves as the voice of those who are weak, and vulnerable, and voiceless.