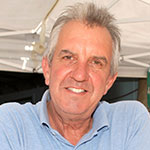 GEORGETOWN My ’84 Chevy pick-up truck and I had similar experiences of late. We both went to the shop for a good going over. The previous owner(s) had been filling Old Blue with oil, and checking the gas for quite a while, so a ring and valve job was in order, along with whatever else my mechanic, Bernie, found. A rebuilt engine, some brake lines, and several belts and hoses later, she runs like a top. There are not many Bernies left in this world that can deconstruct a 35-year-old collection of greasy steel parts and pieces, and make it hum like the classic she still is today. I, on the other hand, checked myself in when I blew a gasket (aka inguinal hernia) only to find out my tail pipe had rusted off at the manifold (aka Stage II colorectal cancer). I was happy to find a whole team of Bernies at Markey Cancer Center, special people that will keep me behind the wheel of my ’84 Chevy.

Early August is a busy time on the farm. There are community supported agriculture shares to get out, veggies coming on strong, lots of planting going on for fall, turkeys getting rambunctious, pastures to mow. One fateful August morning, my day started with the dreaded ‘c’ word for colonoscopy, and I was ready to get it out of the way. A couple of hours later, my wife and I heard the second ‘c’ word: cancer (aka—death sentence). We came home, checked on the farm crew and livestock, then sat down to cry. Through teary eyes it was quite evident that I, we, had a lifetime of stuff still to do and did not know how long we had to do it.

The first thing I did was clean out the fridge and run four or five loads of laundry through the wash, remembering my mother made sure we had on clean underwear every time we went out in the event we were in a car accident so as not to embarrass her. Over the next few days, I hauled stuff from the garage to the dumpster, did some plumbing projects and odd jobs I had been putting off—because I always thought we were getting along fine without them—until now. I dusted off the will as it seemed a lot more important all of a sudden. I realized that careful thought needed to go into it, in hopes of minimizing the cussing among those who must clean up behind me. For example, not everyone would be happy to have a flock of heritage breed organic turkeys bequeathed to them.

Livestock, crops, and customers naturally come first to food farmers. But clearly my perspective had changed. I determined there was no way I was going to get everything done anytime soon, so I needed to live a long time to at least get things in better shape than they are right now. I was planning on twenty or thirty years to get everything done I had on my list(s). At least I needed enough time to get some projects finished, not start anything that wasn’t already on the lists, and unload all the stuff left behind from thirty years of developing a regenerative organic food farm. Time to take it like a man, and fight like a girl.

At Markey, the first thing they had me do was drink a clear liquid they called a dye, and then they also injected another type of dye that makes you feel like you wet yourself, but you don’t (and you’re not supposed to move around to check for yourself.) Next, I was swarmed by what felt like blood-sucking mosquitos wearing scrubs, and soon everyone there knew more about me than I knew about me. Going into the tubes and tunnels to check out my insides wasn’t so bad once I got to pick my own music; my advice is to just keep your eyes closed. All the while, I didn’t know how bad it was, as this was to help figure it out. Know that colonoscopies are a walk in the park compared to the gauntlet you eventually run through. I view it as self-inflicted trauma from not getting scoped early and often enough.

At our first consult we heard the third ‘c’ word: cure. The data and images informed the tumor team at Markey that the cancer had not spread to other organs and we had a shot at treatment that did not include surgery, it was up to me and my microbiome. Complications from surgery can go south pretty quickly down there, so that sounded like a plan I could live with. The tears welled up when we realized how lucky we were to catch it when we did, and to have a team of dedicated, smart people working with confidence to replace the bad parts with good parts, just like Bernie and my truck.

At this point halfway through my treatment plan, I am still buying green bananas, flossing my teeth, although I’m not cutting the cords off appliances as they get pitched out like I used to. I’m eating whatever I want to, anything to keep my weight up because my new boss told me that was part of the job. This unexpected career change has given me a new perspective on life and living. I’ve been feeling pretty good and have time to work on fixing up things on the lists. Taking the time to enjoy being at home feels awesome, as the grass is pretty green right here. As a boy scout, we were taught to leave our campsite better than we found it. I’ve continued with that thought as an adult, but dang, there’s a lot to be done.

The treatments are going as well as can be expected, with several more months ahead. The clinicians seemed skeptical when I told them I take no pharmaceuticals on a daily basis, as I’ve worked hard to avoid diet-related disease complications. The hard work of farming and the balance of nutrients in the food has put me in a position for good things to happen. No diabetes/heart conditions/cholesterol/liver(whew) to complicate the blitzkrieg of drugs now coursing through me. Not a position I was gunning for, but my family and our team of employees are affording me the time to make beating cancer my full-time job! The farm keeps me active and motivated, not to mention provides an abundance of wholesome, tasty food.

I realize that there is no time for asking “why me.” I have been tested many times before and will live to be tested again. The doctors will do their part to rid me of the alien inside me, but I must provide the building blocks to reconstruct my vital organs. Thank you to Markey Cancer Center for giving me a shot at driving a rebuilt ’84 Chevy, and for the ability to work on my lifelong to-do list. Right now, I am so far behind I may never die. Godspeed.