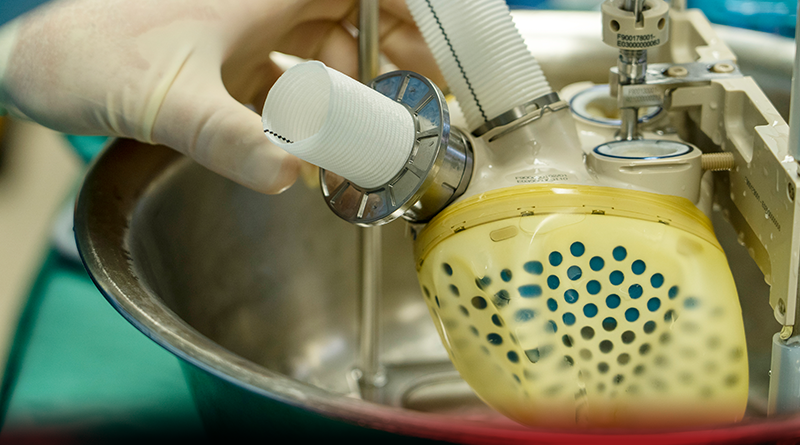 LOUISVILLE The cardiothoracic surgical team at UofL Health – Jewish Hospital performed the world’s first Aeson® bioprosthetic total artificial heart implantation in a female patient on September 14, 2021. The investigational device, currently intended as a bridge to a heart organ transplant, is part of an early feasibility study (EFS) sponsored by CARMAT, a French medical device company, in partnership with the University of Louisville and the UofL Health – Trager Transplant Center. Jewish Hospital is one of four programs in the nation approved to perform this clinical trial procedure.

The surgery was led by cardiothoracic surgeons Mark Slaughter, MD, and Siddharth Pahwa, MD, both of UofL Health – UofL Physicians and the UofL School of Medicine. The same team completed the nation’s second implantation last month in a male patient also at Jewish Hospital.

“For over half of the world’s population, completion of this procedure by the Jewish Hospital team brings new hope for extended life,” says Slaughter, UofL Health surgical director of heart transplant and professor and chair of the Department of Cardiovascular and Thoracic Surgery in the UofL School of Medicine. “Size limitations can make it harder to implant artificial hearts in women, but the Aeson artificial heart is compact enough to fit inside the smaller chest cavities more frequently found in women, which gives hope to a wider variety of men and women waiting for a heart transplant and increases the chances for success.”

More than 3,500 individuals are awaiting a heart transplant in the U.S. and 900 of them are women. There are few treatment options for patients with biventricular heart disease, when both the left and right sides of the heart are not pumping blood adequately. The Aeson device is designed to solve the limitations of current left-ventricular assist devices (LVAD), which pump blood into just one chamber, by pumping blood in both heart chambers. It is fully implanted as a heart replacement and powered by a portable external power supply.

During this procedure, the Aeson total artificial heart was implanted into a 57-year-old Kentucky woman with severe biventricular heart failure during an eight-hour surgery. The recipient had undergone cardiac surgery years before but was referred to the Advanced Heart Failure Therapies Program at Jewish Hospital earlier this year with end-stage heart failure. The patient is recovering well in the cardiovascular intensive care unit (CVICU).

“The varying pumping ability of the Aeson device increases its viability among more patients,” says Pahwa, UofL Physicians cardiothoracic surgeon and assistant professor in the UofL Department of Cardiovascular and Thoracic Surgery. “While other devices are set at a fixed rate or create a continuous flow, CARMAT has developed the Aeson to automatically adjust the flow, creating an improved performance to meet the body’s changing blood flow needs.”

“This world-first artificial heart implant into a female patient is another demonstration of UofL Health’s commitment to both providing the world-class care of today and developing the world-class standards of tomorrow,” says John Walsh, CAO of Jewish Hospital. “We celebrate this first as a milestone and recognize the hard work of Drs. Slaughter and Pahwa and the entire team. The true impact of their work will be measured in the dozens, hundreds, and thousands of lives improved in the years to come.”

The patient who received the nation’s second Aeson implant, on Aug. 20, 2021, continues to improve at Jewish Hospital.