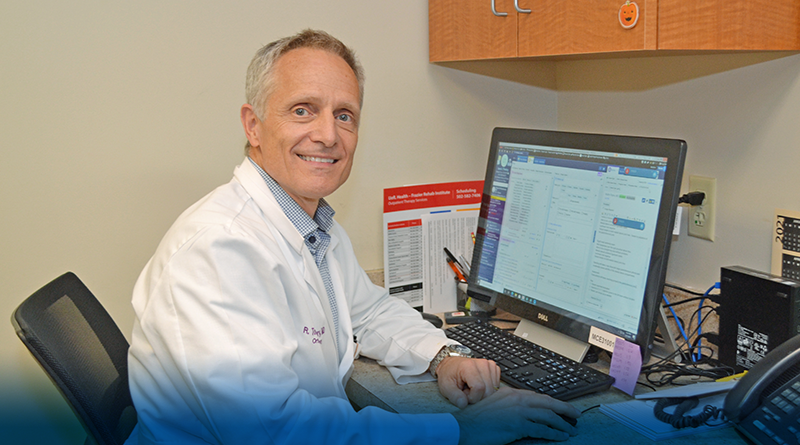 LOUISVILLE To say it’s been a long, strange trip for Todd Hockenbury, MD, might be an insult to long, strange trips. Hockenbury, who serves as the assistant clinical professor of orthopedic surgery at UofL School of Medicine and surgeon at UofL Health – Mary & Elizabeth Hospital and Medical Center East, has packed a lot into his 36 years in healthcare.

The Louisville native’s journey took him from the classrooms of Seneca High School and West Point to a medical career in the U.S. Army and a decision to become one of Kentucky’s earliest specialists in foot and ankle surgery. His time in the Army included a stint right after the Cold War ended in a United Nations’ MASH unit in the former Yugoslavia where he treated patients from more than 25 countries, including Russia and the Ukraine.

After he left the Army as a lieutenant colonel in 1997, he took a year-long foot and ankle fellowship in Cincinnati then returned to Louisville, where he was in private practice for a decade. In 2008, he was hired by Jewish Hospital, which became part of UofL Health, and he’s been there ever since.

So, just how does a kid from Louisville wind up halfway around the world treating Soviet military officers?

Well, when you are in the U.S. Army, you move around a lot, and Hockenbury was no exception. In the decade immediately after he finished at UofL School of Medicine, he had two stints at Fitzsimons Army Medical Center in Denver doing four years of orthopedic residency. That’s where he met his wife Dawn, who was a pediatric OR nurse at Denver Children’s Hospital. Then he spent a year at Fort Benning, Georgia, and worked overseas in Germany and Croatia.

“We were stationed in Zagreb, Croatia, with the 212th MASH unit, and I spent four months supporting the United Nations during the breakup of Yugoslavia,” says Hockenbury. “It was quite an experience taking care of people from so many places—Russia, Ukraine, Poland, France, Argentina, Egypt and Nepal. We had all these translators trying to help us communicate with these patients from 25 or so different countries. It was really fascinating, and I learned a lot about people and how much we are all alike.”

In his role with the MASH unit, Hockenbury did a lot of wound management and general orthopedics work, which included some amputations and fracture work. The unit didn’t receive soldiers right from the battlefield; rather the doctors saw patients a couple of days after they’d been stabilized at the battalion aid station.

“We were taking care of a lot of Russian and Ukrainian soldiers, who, just a few years earlier, we were at war with before the Iron Curtain came down,” says Hockenbury. “These soldiers and their commanders were extremely grateful for the care we provided, and we had several Russian generals come and personally thank us.”

Getting His Footing in Orthopedics

Hockenbury says choosing orthopedics as his specialty was heavily impacted by his days as a college gymnast.

“Like most orthopedic surgeons, I am a former athlete, and so I was interested in sports medicine,” he says. “With my engineering background at West Point, I think that was a natural fit to go into orthopedics.”

His decision to specialize in foot and ankle surgery traces back to his residency when he published a paper on Achilles tendon ruptures. As the paper gained traction, he was asked to present at different medical conferences where he got to know well-established foot and ankle surgeons, and he was hooked.

“At that time, 30 years ago, foot and ankle surgery were still in their infancy,” Hockenbury says. “It seemed like an opportunity to get in on the ground floor with a part of orthopedics that had been ignored for a long time.”

The focus of Hockenbury’s more recent work has been foot and reconstructive ankle surgery in adults. He routinely treats patients with plantar fasciitis, Achilles’ tendonitis and posterior tibial tendon tears that lead to flat foot deformities, as well as less common ailments such as ankle arthritis or severe, post-traumatic deformities and congenital foot conditions.

“I jumped on that when it was just making a comeback in orthopedics in the mid-1990s,” he says. “I’ve probably done over 700 ankle replacements, and now the implants we are putting in are much better than the ones from 22 years ago.”

As with many medical specialties, technology has played an ever-increasing role in ankle surgery. The Wright Medical INBONE Implant is the device Hockenbury has used the most.

“It has a big stem that goes up into the tibia with a lot more stability,” he says. “The software even makes patient-specific instruments that I use during the operation to reproduce exactly where the implant should be. That gives us a better chance of getting the implant right in the sweet spot where we want it so it can last for a long time.”

In his role as a professor, Hockenbury teaches both orthopedic residents and podiatry residents. While there is significant overlap between the two specialties, there is differentiation.

A big difference is the length of training, as a podiatry resident does three years after podiatry school and an orthopedic surgeon does five years of residency after medical school.

There are currently seven times as many podiatrists as there are foot and ankle orthopedic surgeons in the United States, and that gap means more patients choose to see podiatrists rather than waiting to get an appointment with an orthopedist. Hockenbury says the differences between the two disciplines can be very important.

“I think the training that podiatrists get now is superior to what they got in years past,” he says, “and most of the time, the podiatrist does a fine job. But sometimes the outcomes are less than perfect, and that’s when I see the patient and have to redo what’s already been done. That’s hard for the patient and complicated for the surgeon.”

And, when it comes to foot and ankle surgery, the specialty still has a bit of Rodney Dangerfield’s “I don’t get no respect” syndrome.

“There are so many knee replacements being done that everybody knows someone—a parent, a brother, a neighbor, an aunt—whose had one done,” he says. “Because they are 25 times more common than ankle replacements and ankle fusions combined, there just aren’t that many people you’ll know who have had an ankle replaced.”

He says he regularly runs across patients who have never heard of ankle replacement surgery and even some doctors who don’t know about it. While that can be tough for business, Hockenbury says the proof is in the healing.

“The way I get my patients is typically that one of my previous patients will see somebody limping and say, ‘If you have ankle pain, you should go see Dr. Hockenbury.’ That’s the absolute truth!” he says. “As more doctors become aware of what I do, I get referrals from other orthopedic surgeons and I get a lot of referrals from podiatrists. But most of my patients I get by word of mouth.”

Good footing and ankles are the foundation for proper orthopedic alignment and weight-bearing for knees, hips, and lower back.