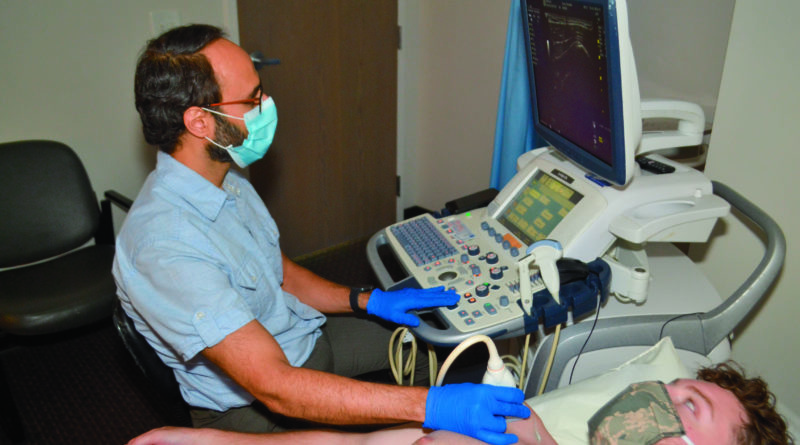 LEXINGTON The achy jointed weekend warriors and active seniors of our modern culture often need more than physical therapists and ibuprofen to keep them moving comfortably. Fortunately, Danesh Mazloomdoost, MD, has their backs—or rather, their hips, elbows, shoulders and knees. His use of percutaneous tenotomy to address micro-scar tissue in tendons—a source of persistent pain for many active or aging people—is just another of the regenerative treatments offered at Wellward Regenerative Medicine, his medical practice in Lexington. This outpatient procedure, accompanied by focused physical therapy, is giving his patients years of comfortable movement. And like so many of Wellward’s services, it is an integrated, highly effective and minimally invasive procedure new to the Central Kentucky healthcare ecosystem.

When we say we are experiencing joint pain, it often means motion-limiting connective tissue swelling due to inter-fiber scaring. Non-arthritic joint pain is not typically a problem where the bones meet, but a problem with the ligaments and tendons that hold those bones in place. Mazloomdoost says, “For many patients, physical therapy and anti-inflammatories do not provide sufficient relief, especially when there is micro-scar tissue that runs the length of an overused or long-ago traumatized tendon.” Percutaneous tenotomy is a method for ridding the tendon of enough of that scar tissue to cause relief.

Percutaneous tenotomy relies on ultrasound guidance to isolate a treatable area of a tendon to which a needle is then applied. Ultrasonic waves or high-pressure fluid vibrations are applied to a small area of tendon fibers, disrupting the scar tissue there. This single-treatment, outpatient procedure has the effect of relieving constriction the length of the tendon. A four-to-six week physical therapy regimen is also prescribed to make the most of the procedure. Percutaneous tenotomy has been around for a number of years, with a high success rate for patients who are not responding to conservative therapies. Outcomes appear as positive, if not better, as that of surgical treatment, with more rapid recovery, less post-procedure pain and lower overall costs.

Percutaneous tenotomy is not widely performed in Kentucky, and Mazloomdoost has worked hard to master the techniques and cultivate the support systems to bring it here. Using ultrasound to diagnose inter-fiber scar tissue in tendons has involved a steep learning curve, he says. To discern the density changes and tears that indicate what he should address requires recognition of the patterns this insightful tool can provide. After this initial determination, he then performs the injections at one of two surgery centers, where has the option of using a Tenex device, which uses ultra-sonic waves, or the Tenjet device, which employees high-pressure fluids.

Mazloomdoost leverages the minimally invasive strengths of these evolving technologies and helps the patient do the rest. “The tenotomy does not remove all the scar tissue; it is not going to fix it in and of itself,” he says, “but the rest will resolve with exercise.” The procedure is not a magic bullet, but he says, “It does give the patient a major boost forward with what the rehab needs to do.”

Mazloomdoost also leverages his connections within the physical therapy community. “We build relationships with physical therapy providers so that we can optimize the combined approach.” In this way, percutaneous tenotomy is a typical Wellward procedure: the understanding of a complex process, the utilization of a subtle procedure, and the support of the patient in rehabilitation come together to yield an elegant outcome.

An Accessible Procedure with Broad Appeal

Most of his patients are referred to him from physical therapists. “When they are not seeing a patient progress the way they should, we can get involved.” Very often, however, Mazloomdoost says that patients are coming with a misdiagnosis; what might be seen as bursitis, unrelated to connective tissue, is in fact tendon pain at the point that it passes around a bursa. “What you often see under ultrasound is instead a tendopathy. Left unchecked, it can result in bursitis, but not if we perform percutaneous tenotomy on that tendon.”

The hip, with the shoulder a close second, is the joint he most often performs tenotomy on. Sufferers of musculoskeletal conditions such as tennis elbow, golfer’s elbow, jumper’s knee, plantar fasciitis, and pitcher’s and swimmer’s shoulder, are many of his patients. All are experiencing chronic pain, which may have started with a traumatic injury that the body has compensated for, or that is the result of gradual wear and tear. He says, “The weekend warriors really respond well to this, because often it is just a small tether that once you release it the pain is gone and they are back to playing.”

He also has helped a lot of seniors who want to stay active—or just comfortable. He recently did a percutaneous tenotomy on a longtime patient, a 70-year-old woman who had been having lateral hip pain for years and was not responding to physical therapy. She had expressed hesitation about an even minimally invasive procedure, but her increased pain and the arrival of the Tenjet tool at the surgery center converged, and she elected the procedure on her right hip. Halfway through her rehabilitation—one hour every other day for four weeks—she was able to sleep on her side for the first time in years, and she was requesting to have the procedure on her painful opposite hip.

Mazloomdoost sees percutaneous tenotomy as yet another way that Wellward is changing perception and practice of pain management in our region, and eventually beyond. He reflects, “I view our practice as a living laboratory for developing an entirely different approach and thought process towards pain.” Wellward generates a registry of results in multiple areas that patients, physicians, and insurance providers can consider, and it may affect their choices—eventually. Aspirational, yes, but for now he is realistic about his potential reach. He concludes, “We want to develop the models and then be the open source for teaching others how to do it.”