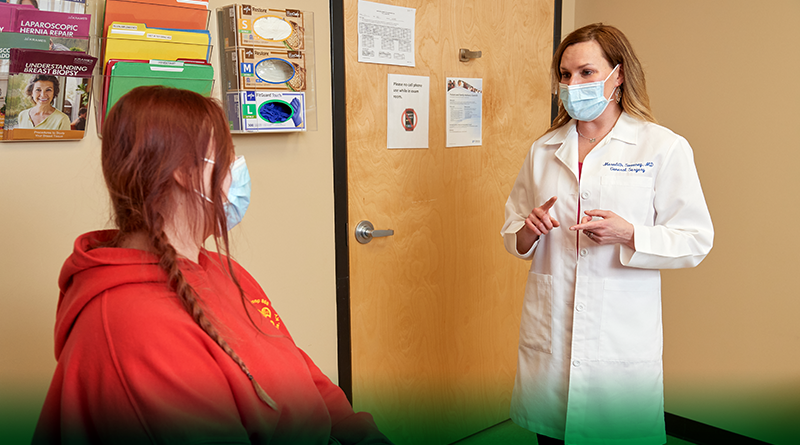 LOUISVILLE Surgeons often say they enjoy surgery because they like to fix things. Not surprisingly, that’s what drove Meredith Sweeney, MD, bariatric and general surgeon with Norton Weight Management Services to become a surgeon.

“I like to diagnose a problem, go in, fix it, and be done,” says Sweeney, who knew in third grade that she wanted to be a doctor. She grew up in Chicago and attended the University of Illinois College of Medicine there before moving to Kentucky in 2006 when she did a general surgery residency at the University of Louisville Hospital. That was followed immediately by a fellowship in advanced laparoscopic and bariatric surgery. She joined Norton Healthcare in 2014 and has performed more than 800 bariatric surgeries since 2012.

While those surgeries do indeed “fix the problem,” Sweeney has learned that her patients’ long-term health often requires care and guidance well beyond the surgery table. It’s not just a procedure, it’s a journey that each patient makes at their own pace.

If this sounds counter to the “fix the problem and be done” mentality, that’s because it is. As she watched her patients and learned what caused them to succeed or fail after their surgeries, Sweeney took note and realized that sometimes they needed more help.

“Where I have gotten off the beaten path of traditional surgeons was a self-development journey that I started in 2018,” she says. “That included diving deeper into health and wellness as a topic. I read tons of books and attended multiple conferences, listened to hours and hours of podcasts to be able to provide a more well-rounded, but scientifically based practice. After bariatric surgery, the coaching a patient is going to get from me looks a lot different. We focus on things like stress management, sleep quality, exercise, and movement and how that impacts their overall mental health.”

On average, Sweeney performs between four and six bariatric surgeries per week as well as four to five endoscopies. All of her patients are 18 or older, and approximately 80 percent of bariatric surgery patients are women. Common presentations include comorbidities such as diabetes or heart or lung disease.

The Stigma of Bariatric Surgery

Many patients tend to put off bariatric surgery because they feel like they should be able to solve the problem themselves.

“There is a certain stigma that this is the easy way out, and this is just not the case. My patients work very hard after surgery to reach their goals,” Sweeney says. “By the time they even get to the point of thinking about bariatric surgery, most patients have tried so many other diets and lifestyle changes. They have to get to that point where they realize they need an extra tool in their toolbox, i.e. bariatric surgery.”

Sweeney performs sleeves, bypasses, and bands, with a preference towards sleeves and bypasses, which constitute roughly 80 percent of her procedures, with the other 20 percent being revisional bariatric surgery or bands.

While some misconceptions still exist about the safety of bariatric surgery, Sweeney is quick to point out the safety and effectiveness of the procedures.

“A lot of doctors that are not in this field still think that these are very tricky operations, that they are not safe and not successful,” she says. “But now our surgeries are very safe and successful. The other misconception is that there is still a high malnutrition risk after these surgeries, and that’s just not the case. We make sure the patient has enough small bowel to be able to absorb the necessary vitamins, minerals, and nutrients.”

Nearly all the surgeries are performed laparoscopically, allowing most patients to go home within 24 hours after surgery, but that journey doesn’t end there. It’s only just the beginning.

“I do continue to see my patients for the rest of their lives or as long as they want to ensure we are still set on the right course to meet their goals,” Sweeney says. “If anything happens, where they start to stray off course, we’re going to get our dieticians involved and have a more aggressive follow-up. I am a lifelong partner with that patient in terms of their overall health and wellness goals.”

Sweeney says that many factors can impact the success or failure of a patient after bariatric surgery. Difficulties with relationships, lack of quality sleep, and stress can all lead to a return to poor dietary habits. Patients who don’t have the support of loved ones may be pressured into returning to poor health habits. Stress, anxiety, and depression all work against a patient’s health goals.

“Stress is one of the most common reasons for people to make poor food choices,” Sweeney says. “I like to help my patients come up with different stress management techniques that aren’t going to send them walking to their refrigerator or to the pantry to make a poor food choice. An object in motion stays in motion, and if you’re making good choices, if you’re feeling good about yourself and your choices, you tend to make more good choices.”

One good choice her patients can now make to stay up to date with their follow-up appointments is telehealth, via MyNortonChart. Due to the pandemic, Sweeney and her colleagues began conducting follow-up visits virtually. Because many of her patients come from a significant distance including southern Illinois, southern Indiana, and rural areas of Kentucky, it is common for these patients to be negligent about their follow-up visits with Sweeney or the dietician. Sweeney says not only does the telehealth option reduce missed visits, but it also puts the patients more at ease.

“Patients who are at home are much more likely to be open and honest with you and that’s what we need in this relationship,” Sweeney says.

After her own health and wellness awareness journey in 2018, Sweeney is intentional about making sure her patients have the support they need before, during, and after surgery. Even though she can’t “fix it and be done,” she can fix it and help maintain it, which is perhaps even more rewarding.

“I consider my specialty one of the most rewarding surgical specialties out there,” she says. “I get to see patients transform their health in front of my very eyes. I get to see their overall well-being, overall happiness, and longevity change before my very eyes.”

It’s easy for her to see because she’s right there with them, every step of the way.