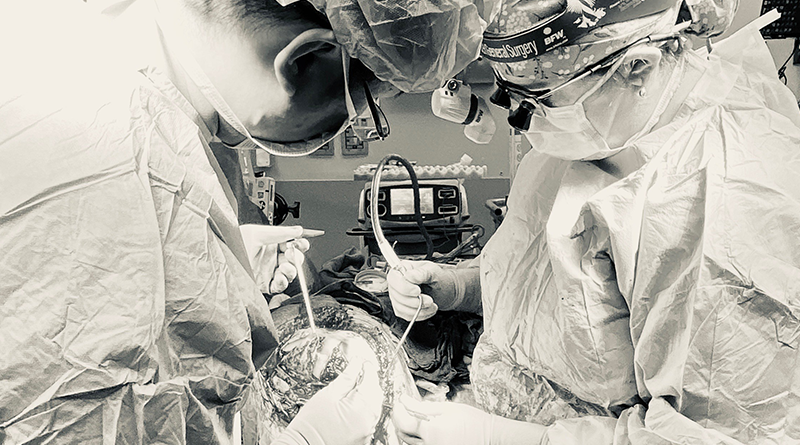 LOUISVILLE As the only vascular neurosurgeon on staff at UofL Health, neurosurgeon Dale Ding, MD, is the go-to guy for emergent care of cerebrovascular concerns. Ding, however, would not let you think he is that special. As he tells it, he just plays his role in the department, performing catheter-based endovascular procedures day in and day out and educating patients about their options. But remotely strengthening vascular abnormalities of the brain and dispersing stroke inducing clots involves great care, skill, and mastery of ever-advancing technology, so Ding is more critical than he would let on. Along with this surgical acumen, his priorities include putting patients at ease and giving them decision-making capacity. “My goal,” he says, “is to offer the whole spectrum of treatments for the whole spectrum of vascular disorders.”

Ding was first drawn to neurosurgery during medical school at Duke University, where he found the anatomy of the brain, hands-on element, and personalities of the neurosurgeons appealing. Following his residency at the University of Virginia and a one-year catheter-based procedures training at the prestigious Barrow Neurological Institute in Phoenix, Arizona, Ding learned of the need for a second vascular neurosurgeon at UofL. Upon visiting, he perceived the prospect of good mentorship from the chair, Joseph Neimat, and of the university’s valuable commitment to a combination of clinical practice and research. Both were borne out when he joined UofL in 2018.

All in a Day’s work for Ding

While Ding does have a half day of clinic per week, the majority of his contact with patients is call based. As a member of the stroke team, Ding handles emergent stroke or vascular situations that are referred to him by the stroke neurologists with whom he is paired. He also takes some general neurosurgery calls, including brain and spinal cord injuries, but quickly refers out the non-emergent needs. Diagnostic angiograms are an integral element of his work at times.

Ding estimates that 75 percent of his work is catheter based, working up through the femoral or radial artery, through the heart, and delicately into the brain, as needed. Working primarily remotely, he deals with damaged, injured, or malformed blood vessels that can cause bleeding or circulation problems resulting in strokes and other symptoms. The most common pathologies he treats are brain aneurysms, plaque in the carotid artery, and clots that dislodge and head for the brain. Less commonly he might address abnormal tangles of blood vessels or arteriovenous malformations (AVM) and fistulas.

After a steep learning curve during his first two years, Ding has settled in comfortably as the sole practitioner of vascular neurosurgery at UofL Health. Since his senior partner departed for another facility, he is working more and is aware of increased efficiency in his work. Ding notes that though he knows many facilities are seeing an increase in stroke, related to COVID-19 diagnoses, he has not yet seen a related uptick in need for his services.

An evolving field—in procedures and tools

The arc of neurosurgery has been to address issues at increasingly smaller scales, and vascular neurosurgery is no different. For Ding, the cutting-edge is addressing very minor issues, such as non-lethal spontaneous brain hemorrhages, which are often due to high blood pressure. He is currently involved in a clinical trial on evacuating tiny brain bleeds to prevent stroke before it happens without a craniotomy. Using the endoscopic Artemis device, he can break up and aspirate the clot. While still in the testing phase, this is a promising non-invasive method for such pre-emptive work.

The Artemis by Penumbra is just one example of the innovative or refined devices that populate Ding’s field. He is also using a new generation of aspiration catheters that include a larger tube that provides more suction pressure and makes it easier to suck out brain clots. The pace of innovation does not necessarily overwhelm him, though. He says, “We are always evaluating new devices, but most of the existing ones are very good.”

New flow diverting stents and a mesh web that inserts inside the aneurysm to keep the blood in the area to promote clotting are two devices that he has not seen the need to adopt. Ding’s philosophy is that “while it is incumbent upon practitioners to be open to new devices, what is worth devoting resources to depends on the volume of need in your area.” As such, his department upgrades judiciously.

Ding is excited about one technological improvement he interacts with daily: the department’s new interventional radiology (IR) suite. As the vascular neurosurgeon’s fundamental tool, the IR suite uses image-guidance to allow them to perform their minimally-invasive procedures in an operating room type setting. Ding says this update allows for more detailed catheter work because the quality of the pictures is much better. This creates an added layer of safety during particularly challenging procedures and allows videorecording at very high resolution. “This element is so good for teaching purposes, as a result,” he adds. In addition, the new suite has the additional safety advantage of lower radiation exposure because of the increased speed at which it allows the surgeon to work.

“The new interventional radiology suite at UofL Health – UofL Hospital allows for more detailed catheter work because the quality of the pictures is much better.” — Dr. Dale Ding

Putting the patient at ease and empowering them

Ding is well aware of the cliché of the “aloof or arrogant” brain surgeon, but defies it. “We at UofL are easy to work with, and I am always happy to collaborate,” he states. This is embodied in his patient-centered approach. He knows his field can be intimidating for patients, but his philosophy is to put patients at ease; he includes them from the beginning, so they can be a part of the discussion of risks versus benefits and prospective treatment equivalencies. He also works hard to be aware of a patient’s psychological profile in regards to worry. 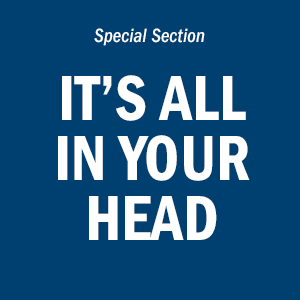