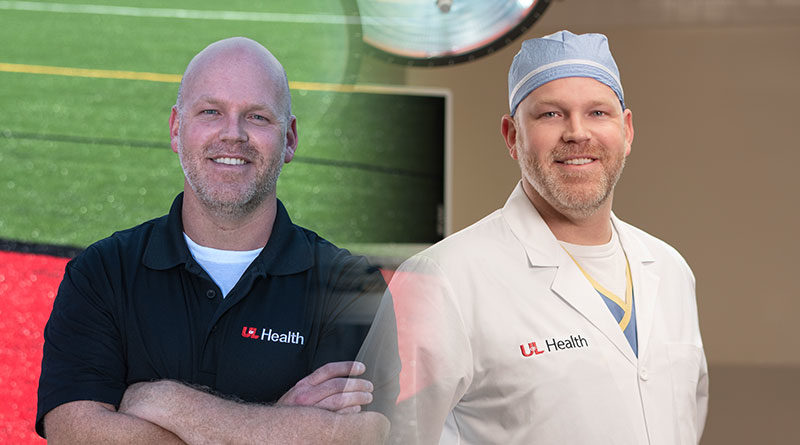 LOUISVILLE Many people struggle for years trying to figure out what they want to do with their lives. That’s not the case for Logan Mast, MD. When it came to foreseeing his future, you could say young Logan caught a break.

“I had exposure to orthopedics at an early age with several broken bones, and made the decision that was what I wanted to do with my life by the time I reached high school,” says Mast, who is an orthopedic surgeon and sports medicine physician with UofL Health-Sports Medicine

Mast’s broken bones and injuries were part of a youth spent participating in soccer, tennis, wrestling, and cross country. Originally from Louisville, Mast attended Vanderbilt University, where he also played club rugby. Recently, he has added tennis back onto his list of after-work activities.

At Vanderbilt, Mast double-majored in molecular biology and Spanish. But his love of sports and mechanics led him to become an orthopedist. He attended University of Louisville School of Medicine, where he also completed his orthopedic residency. In 2015, he completed a sports medicine orthopedic fellowship at American Sports Medicine Institute in Birmingham, Alabama, before returning to Louisville.

“I am very mechanically minded and have always enjoyed working with my hands,” Mast says, noting that he worked construction while in high school and college. “I like the ability to treat someone with an acute problem, identify the problem and fix it relatively quickly and definitively, and be able to move on and help the next person. I find a lot of gratification in being able to definitively fix a patient’s problem.”

Mast is an orthopedic sports medicine physician, but adds that general orthopedics are also part of his practice. “I take care of young athletes, weekend warriors, and all the way up through older patients with arthritic disease, fractures, osteoporosis, and issues that come with aging as well,” Mast says. He adds that many of his patients are what he calls “industrial athletes,” adults who work physically demanding jobs and need to be treated to return to productive levels of activity for their occupations.

Mast recognizes that understanding what his patients need to be able to do on a playing field, at work, or just in their daily life is an essential first step in determining the course of treatment.

“Patients sometimes don’t have a good grasp on what treatment options are available when they arrive in my care,” he says. “My job is not to decide for them which treatment may be best, but to help them decide it for themselves. It is not uncommon that there may be a gray zone regarding what is the best treatment option for a patient, and the answer in almost all those cases is to ask the patient to weigh in on that decision. My goal is to achieve the patient’s idea of a successful outcome.”

When the need arises, Mast performs surgical procedures such as knee replacements and hip arthroscopy. The hip arthroscopy is designed to be a hip joint preservation procedure and involves a camera and minimally invasive instruments to treat problems such as a labral tear or impingement. For knee replacements, Mast says his patients tend to be older and typically present with arthritis.

“The articular cartilage has worn thin or completely out to the point where patients have pain and swelling and mechanical catching or grinding in their knee that limits their ability to live a normal or active lifestyle,” he says. “Frequently we see knee arthritis in formerly athletic patients who have wear and tear problems in their knees, sometimes in part related to their prior athletic endeavors. They present with pain, and we do everything we can to keep them as functional as possible with nonsurgical means. In many cases injections and therapy and medications are involved to avoid the need for knee replacement. When the time comes however, a knee replacement works quite well to restore function and pain relief to patients who have otherwise become debilitated because of their arthritis.”

Mast uses a Stryker Mako™ Robot during the operation to help prepare the ends of the femur and tibia to receive the knee replacement implants. “The robot allows us to electronically adjust the planned cuts on the ends of the bones and the position of the implants before we actually commit and make those cuts,” he says. “It allows us to electronically estimate and manipulate the balance of the knee and the position of the implant before we make any physical cuts. It is a big step forward in terms of improving our consistency and accuracy as surgeons.”

While joint replacements have come a long way, Mast notes that significant strides are also being made in joint preservation to avoid the need for joint replacements. He points to biologic treatment options such as stem cells, platelet-rich plasma (PRP), and visco-supplementation.

“There is conflicting evidence in the use of PRP in many situations. But I think we’re starting to understand that for certain problems – for example, tendinitis of the elbow or knee as well as certain other situations – platelet rich plasma has shown to be very beneficial and allows both pain relief and potentially some healing of those tendons,” Mast says. “There is also conflicting evidence in support of, or against the use of gel injections for arthritic problems within the knee. Hyaluronic acid is FDA approved for knee arthritis and, in my practice, it is very useful in allowing patients functional improvement and pain relief in order to defer the need for knee replacement.”

Mast notes that much still needs to be learned about PRP and “gel” injections to understand when they are, and are not, effective. But he has seen enough to believe in their value and foresees further advancements in the future. “Between robotics and biologics, it would be hard to identify something that is going to be more significant as far as advancing the future of orthopedic sports medicine,” he says.

Mast, who covers athletic teams for Manual High School in Louisville, says that whether he’s treating young athletes, industrial athletes, or aging patients, the mindset is generally the same.

“We are all pretty similar and ultimately we all want to get back to whatever it is that we do for a living or for fun,” he says. “We want to wake up and not have pain and be able to live life to its fullest.”