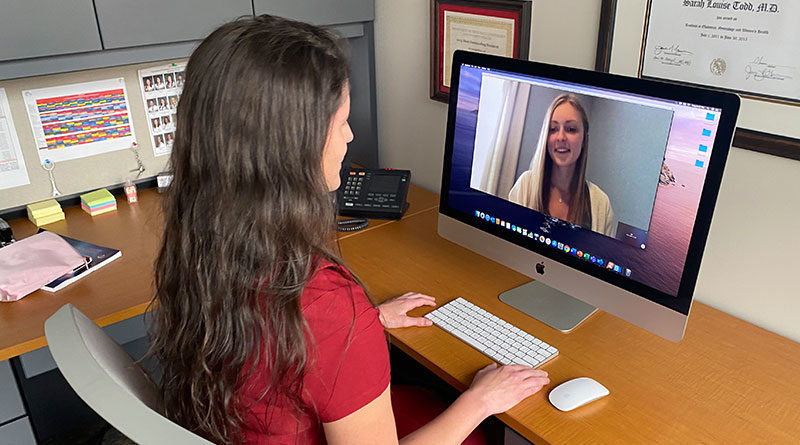 LOUISVILLE In early April 2020, when personal distancing and restrictions from the COVID-19 pandemic were high, Sarah Todd, MD, had the painful privilege of helping a patient and her loved ones say goodbye via a telehealth conference. During the course of the call, Todd watched the family move through fear to acceptance, even able to share memories and relate stories about happier times. The unique experience left a lasting effect. Todd says, “I will keep this with me throughout my career.”

As a gynecologic oncologist, palliative care is just one challenging aspect of the subspecialty, but one she deeply values. “As you manage these patients, sometimes from their respective diagnoses to their deaths, you can’t help but form a relationship with them over these periods of time, no matter how short or long they are. I am a very lucky individual to be able to walk this journey with patients and their families and to get to know them in ways I otherwise may not. It impacts me as a physician and human being,” states Todd.

In the wake of COVID-19, telehealth was quickly adopted as a communication tool across all specialties in UofL Health. According to David McArthur, director of public relations, UofL Health implemented a system-wide rollout with 675 of their 700 plus providers signing up so they could provide uninterrupted patient consultation and care.

Todd, a first-time telehealth user, quickly found herself conducting the majority of her appointments remotely. “Ninety percent of our office is telehealth, and we are still maintaining numbers almost consistent with what we had prior to the lockdown. It has been extremely important and impactful in our ability to continue patient care, especially in the field of oncology. It’s significant to our patients to maintain that line of communication,” says Todd.

Taking Her Own Path

Todd developed an interest in medicine at an early age through observing her father, a psychiatrist. She says, “Growing up with a parent who was in the field, I saw how his life and his career worked and always enjoyed getting to tag along for shadowing opportunities.” It was her father, Robert Todd, MD, who suggested she shift her focus from basketball to medicine. “I have this vivid memory of talking to my dad while riding in the car back from a summer basketball camp when I was in the seventh grade. He essentially broke it to me, as gently as possible, that a career in the WNBA was not likely in my future, so I might want to consider other options. Thanks, Dad,” Todd says, with a laugh.

Todd explains, “As a gynecologic oncologist, we do both cancer surgery and chemotherapy, which is very unique. In every other subspecialty that involves oncology, you’re either on the surgical side or the medical side. Gynecologic oncology allows me to maintain both a complex surgery-based practice as well as optimal continuity with patients outside the operating room. And, I liked that concept. A lot.”

A Wide Spectrum of Diagnoses

Todd joined UofL Physicians in 2019, specializing in the treatment of benign and malignant gynecologic conditions. She states, “We see a wide spectrum of diagnoses.” These include cervical and vulvar dysplasia, ovarian cysts, fibroids, endometriosis, and tumors of the ovaries, uterus, cervix, vagina, and vulva. The most common gynecologic malignancy is endometrial. According to Todd, “Unfortunately, with the ever-increasing obesity epidemic, we’re seeing more and more cases of estrogen-driven endometrial cancer.”

Patients with endometrial cancer can range from women in their twenties to those in their eighties, but the vast majority are in their fifties and sixties and present with post-menopausal bleeding.

The next most common malignancy Todd treats is human papilloma virus (HPV)-related cervical cancer, which is why Todd stresses the need for yearly gynecologic exams and receiving the proper screening according to current guidelines. “Cervical cancer is primarily HPV-driven. The reason we emphasize patient compliance with Pap smear screenings is that cervical cancer is highly preventable. Precancerous changes can be detected and managed early, thereby preventing progression to invasive disease,” says Todd.

Unfortunately, due to lack of education and poor health literacy, many women, especially in rural populations of Kentucky, do not adhere. Todd states, “Compared to the rest of the country, we fall toward the end of the spectrum of having a higher incidence of cervical cancer.”

Current guidelines from the American Society for Colposcopy and Cervical Pathology recommend women initiate Pap screenings at the age of 21 with re-evaluation every three years provided cytologic findings are normal. Beginning at age 30, screenings may be further spread out to five-year intervals provided both cytologic and HPV testing are performed and found to be normal.

Interestingly, cervical cancer incidence has become bimodal, peaking in patients aged 40-45 as well as 65 and older. One theory on why the latter demographic is steadily increasing is new exposure to HPV amongst women who have lost their spouses and are engaging in sexual relationships with new partners.

Many of these individuals wait far too long to see a physician once symptoms arise. Todd explains, “On our end, we see patients that, more often than not, have stage 3 and 4 disease. And, these patients tend to come in, at least fifty percent of the time, as a hospital transfer because they’re hemorrhaging from the extensive cervical tumor.”

Though endometrial and cervical are the most common malignancies seen in Todd’s practice, ovarian cancer is the most deadly. “Ovarian cancer is our most lethal gynecologic cancer today. Despite much research, we still are lacking in optimal means of early detection and achieving better cure rates,” says Todd. Ovarian cancer could be referred to as the “silent killer,” because patients often suffer from a variety of symptoms, including gastrointestinal and urinary complaints, which can easily be mistaken for other ailments. Subsequent delays in diagnosis and management result in discovery of the cancer only once it has become widely metastatic.

Regardless, initial treatment can actually be quite successful. According to Todd, “If you look at the data, despite most patients presenting at stage 3C, if they are able to complete the standard of care frontline treatment, which is a combination of surgery and chemotherapy, about seventy to eighty percent will see a complete clinical response.”

The rate of recurrence, however, is also 70–80%, categorizing this cancer as a relapsing disease. Therefore, much research is focused on extending the time before the cancer returns. The implementation of genetic testing and utilizing targeted therapies has proven effective in maintaining patients beyond frontline treatment. Todd states, “Oncology, in general, has seen an explosion in the past five years in the number of targeted agents that are being used. One, in particular for the field of gynecologic oncology, is the PARP inhibitor. Now, there are three versions of this drug that are FDA-approved for use in our subspecialty.”

Advanced ovarian cancer patients can also benefit from heated intraperitoneal chemotherapy (HIPEC). Of HIPEC, Todd says, “It has actually been around for several decades, but as far as its implementation into gynecologic oncology, it is a fairly new method of treatment. Believe it or not, one of our very own Louisville physicians and surgeons, Dr. John Spratt, helped bring HIPEC into existence in the late 1970s.”

For Todd, any technology that helps her more optimally treat her patients is welcome. This includes the recently adopted telehealth visits. She explains, “Once the COVID pandemic passes, we’re going to continue to fully take advantage of telehealth. A large percentage of our patient population lives quite a distance from Louisville, so being able to reach out to these women more effectively, and make it more feasible for them to communicate and coordinate care with us, is going to be a big help. I think telehealth will be innovative in other ways as well, including improving upon health literacy amongst patients across the state.”

In the end, it is all about fulfilling her mission as a physician, surgeon, and oncologist. Todd says, “My ultimate goal is to better serve my patients by helping to reduce that worry and stress over their particular gynecologic malignancy through support of continued efforts to prolong survival and decrease recurrences; improve methods of detection, screening, and prevention; and reduce the knowledge gap. I truly want my patients to not only be able to fight, but, more importantly, win this war against cancer.”