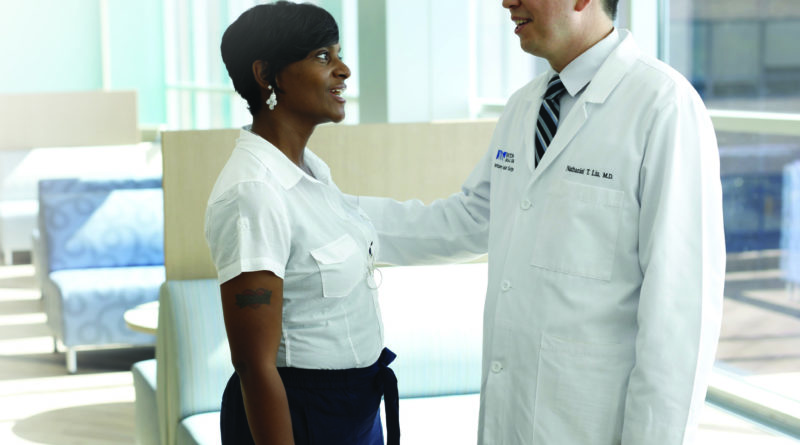 LOUISVILLE It sounds like the beginning of a joke. “A doctor, a plumber and an artist walk into a room…” But it happens every day at a Louisville-based Norton Vascular Surgery practice, when vascular surgeon Nathaniel Liu, MD, walks into see a patient. No, he’s not actually a plumber nor an artist, but he plays both roles when communicating with patients and helping them understand their treatment options.

Hearing a doctor explain arterial blockages or how damaged veins are responsible for leg pain can be a bit confusing and even scary to a worried patient. But knowledge, as they say, is power, and Liu conveys that knowledge in a more easily digestible form, using diagrams and some unorthodox analogies.

“Basically, I am a plumber. I like to think about the problems with arterial blood flow as water in a house,” Liu says, noting that his plumbing analogy is accompanied by an easy-to-understand drawing he does for his patients “Often times I am fixing the pipes in the house and the problems of getting from point A to point B. I can use minimally invasive endovascular techniques like wires and catheters, balloons and stents to ‘Roto-Rooter’ those pipes. Or, I can use open surgical procedure such as bypass, where I literally replace the pipes to get past blockages.”

Like any good plumber, Liu is equipped with all the tools necessary to handle any of these issues. Liu attended the Case Western Reserve University School of Medicine, then completed his residency training in general surgery and fellowship training in vascular surgery at University Hospitals of Cleveland. In 2014, Liu and his wife, Sarah Kane, MD, who is a urogynecologist, moved to Louisville along with their two children; both joining the Norton Medical Group.

“As a vascular surgeon, there are many tools to solve the problem,” Liu says. “There are open surgical operations, endovascular procedures, as well as medical therapy; I have to determine which is the best tool for me to address the patient’s specific problem.

That broad toolkit is necessary as Liu sees a wide range of conditions. He spends the majority of his time treating patients with arterial problems such as cerebral vascular disease, peripheral arterial disease, and aneurysms. These patients tend to be older, and their conditions are often related to hypertension, hyperlipidemia, diabetes, and smoking.

Patients with venous insufficiency and varicose vein problems tend to tend to have fewer co-morbidities and may be younger than arterial patients. They often have history of sitting or standing for long periods, a previous deep vein thrombosis or past injuries to their lower extremities, or a family history of vein problems.

Liu splits his time seeing patients in the clinic, operating, and caring for inpatients in the hospital. He also serves two outreach clinic locations once a month for patients in Greensburg, Kentucky and Leitchfield, Kentucky. Liu performs minimally invasive endovascular procedures and open surgical procedures at the four Norton hospitals in greater Louisville.

While he sees both men and women – he notes that female patients have some specific differences that he has to consider when evaluating and treating them.

“Most commonly patients tell me they have problems with their legs,” Liu says. Problems commonly seen are swelling, aching, and tiredness, or may be that they have difficulty with walking. Patients may also notice that they see veins in their legs or note a color change to their skin. “Not all pain and problems walking are related to blood flow, so a thorough history and physical is key to determine what is causing the problem,” according to Liu.

Pain with walking due to lack of arterial blood flow is called claudication. “Women have a tendency to have smaller vessels, and controlling their risk factors such as hypertension, hyperlipidemia, and diabetes is very important to get lasting results.” For these patients, treatment begins with confirming they are on the proper medications for blood pressure and cholesterol, beginning an exercise regimen, and getting them to stop smoking. Liu also utilizes noninvasive vascular testing to help determine arterial or venous problems in patients.

Liu, who emphasizes communication with his patients, says that many patients just live with leg pain or varicose veins, not realizing there are ways to manage and treat the conditions.

“They will tell me they have had these problems for years and didn’t know there was anything that could be done about it,” Liu says. In the past, varicose vein interventions were limited to open surgery. Now, many varicose veins are can be treated with venous ablation or sclerotherapy, a minimally invasive technique that eliminates the need for incisions.

Medical compression therapy also plays a key role in treatment of venous disease, and Liu leads by example. “I wear compression stockings every day. I’m on my feet in clinic and when I am in the operating room. I tell patients to wear them as consistently as underwear. If you’re wearing underwear, you should be wearing your stockings.”

“I tell them to wear compression stockings like underwear. If you’re wearing underwear, you should be wearing your stockings.” — Dr. Nathaniel Liu

Compression stockings are just one example of the medical therapy that Liu discusses with every patient. Other examples include elevation, skin care, being a healthy weight, and exercise.

“I make sure that I’m listening carefully to what the patients are telling me about their problems,” Liu says of his dialogues with patients. “I try to educate them on how their healthy choices, comorbidities, and activities are affecting their outcomes. I tailor my treatment plans for them with utilizing the best option, whether it be open, surgery, endovascular procedure or medical therapy as well. Getting them well is about them becoming a partner in their treatment.”