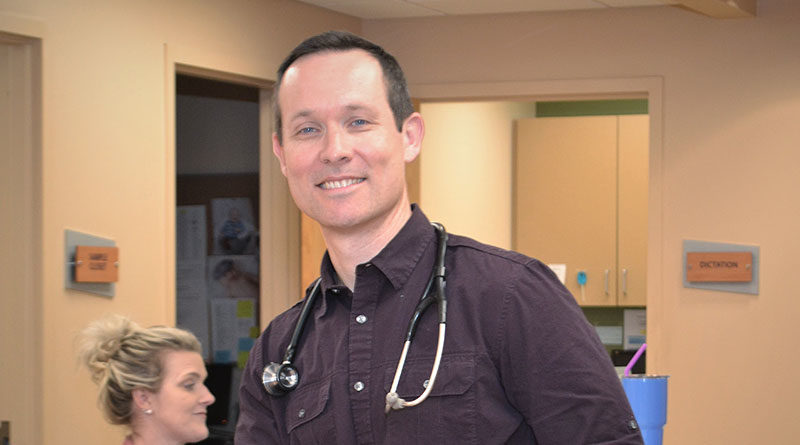 NEW ALBANY, IN Like all physicians, Matthew McCollough, MD, completed years of education and training before reaching his current position as gastroenterologist at Gastroenterology Health Partners’ (GHP) New Albany, Indiana location. As much as he enjoyed learning, he also enjoys imparting that knowledge to his patients, enabling them to better understand and manage their own health. But, contrary to what you might think, imparting that knowledge begins not with a lecture, but by listening.

“When it comes to talking to patients, I make sure they know I’m listening to them,” McCollough says. “I need to make a personal connection with them that I care about their disease, I care about their complaints. I always ask the question, ‘If I could fix one or two things magically today, what would you like me to do? I’m having a one-on-one conversation with you, you can trust me, I’m going to listen to your complaints, and even if I can’t fix them, I’ll be honest with you about it and try to get you to the right place.’ Having a connection and being able to educate them on their disease and also letting them know that I care, because I do.”

Those instincts to educate and care for others led to McCollough developing an interest in the medical profession at an early age. He grew up in western Kentucky and attended Georgetown College, in central Kentucky, where he met his wife Robin, who is a physical therapist. He attended the University of Louisville School of Medicine, graduating in 2003. He completed his internal medicine residency there and served as chief medical resident for a year, enjoying the opportunity to teach students. He stayed in Louisville to complete his gastroenterology fellowship in 2010.

“I love knowledge and teaching people about things,” McCollough says. “Helping people’s quality of life is the main reason I became a doctor. Gastroenterology has allowed me to have a breadth of knowledge that was broad and affords me the ability to continue to learn and help people in a unique way.”

The Road to New Albany

McCollough decided to specialize in gastroenterology after a rotation at the VA in Louisville. One of his attending physicians was Abdul Jabbar, MD, who is now one of McCollough’s fellow partners at GHP.

In addition to the presence of a former colleague at GHP, McCollough was also drawn to the practice because of the scope of care it provides.

“This group offers comprehensive GI care. I was going to use all the skills that I had learned, not referring patients elsewhere because we couldn’t take care of them right here at home. That was a big deal for me.”— Matthew McCollough, MD, GHP, New Albany, IN

“This group offers comprehensive GI care,” he says. “I was going to use all the skills that I had learned, not referring patients elsewhere because we couldn’t take care of them right here at home. That was a big deal for me.”

It has been a big deal for the area, as well. When GHP was founded in 1984, it was common for southern Indiana residents to travel to Louisville for care. “As we’ve grown, we’ve been able to show the community that they can’t get any better GI care than right here in New Albany,” McCollough says. “We’re at point now where we offer not only consultation and endoscopy, but all the advanced GI procedures, and we have our own pathology lab. The patients who come here, stay here locally for all of their care and know they are getting topnotch, cutting edge treatment.”

A particular area of focus for McCollough is Barrett’s esophagus, a condition related to acid reflux coming from the stomach and damaging the esophagus. McCollough treats this precancerous condition via radio frequency ablation (RFA), an endoscopic procedure that cauterizes the tissue. McCollough says that the procedure is 90 percent effective in causing the Barrett’s tissue to regress and return to normal state.

“It’s extremely important because, unchecked, Barrett’s esophagus sometimes turns into esophageal cancer, which is a devastating disease and is often fatal,” he says. “Even when it’s not fatal, it is a very morbid surgery where people have complications and long-term side effects.”

Risk factors for Barrett’s esophagus include central obesity, family history of esophageal cancer, smoking, and reflux. People at the highest risk are white males over the age of 50 who smoke, with chronic heartburn for 10 years, and have obesity mostly in their belly. Screening is done via upper endoscopy and can be done in conjunction with a colonoscopy, saving the patient time.

McCollough also frequently sees patients dealing with fecal incontinence, which is particularly common in women who have had vaginal deliveries and start having problems 20 to 30 years later.

“It’s something people don’t want to talk about, but it’s a very important problem and a major burden to our society,” McCollough says, noting that fecal incontinence is one of the primary reasons that elderly people are sent to nursing homes. Fecal incontinence is caused by nerve damage that prevents the body from communicating with the brain.

“In the last five to 10 years we have found a new therapy called InterStim,” McCollough says. “It’s a sacral nerve modulator that helps to reconnect the connection between the brain and the rectum. The InterStim is an implantable device about the size of a silver dollar. It goes near the tailbone below the belt line, internally. We do a temporary implantation with the leads on for 5-7 days to see if it works. If it works, we implant the lead into the holes in the tailbone. The therapy is up to 80 percent effective. It’s life changing.”

Helping patients understand that there are potential solutions that will enable them to maintain higher qualities of life is, indeed, life changing. For McCollough, it’s these teachable moments that are the inspiration for the work he does.