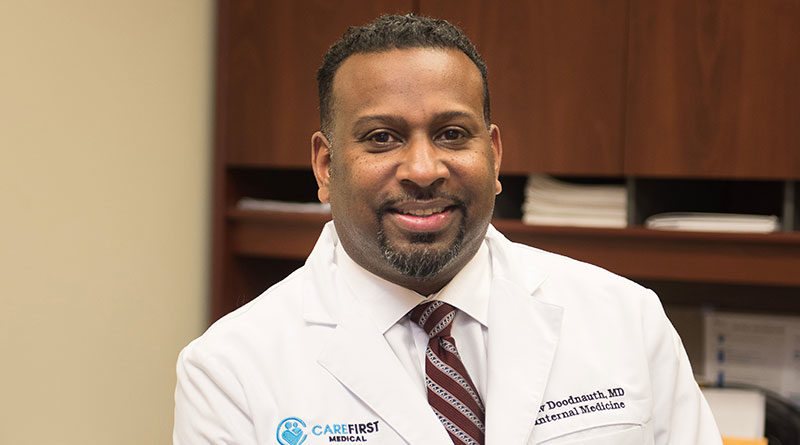 LEXINGTON In a time when physicians are in demand across the country, doctors tend to have multiple options on where to live and practice. It’s fair to say most make that decision based either on proximity to friends and family or on the specific position available. For Davanand Doodnauth, MD, however, the decision to move from New York to Kentucky was all about the Thoroughbreds.

“I’ve always been interested in horses,” says Doodnauth, who grew up in Long Island. “My dad took me to Belmont racetrack when I was a kid. He was a strict disciplinarian and moreso a scholastic disciplinarian. Sunday through Friday was really all about school. But, on Saturdays, you would see this person just relax and enjoy the company of his friends while taking in the races. He would be a different person at the track. I enjoyed seeing the animals and feeling the pomp and pageantry of the sport. From the beginning, I was always fascinated with pedigree and breeding.”

That fascination meshed well with his first passion – medicine. Doodnauth was born and raised in a family of nurses. His parents were both nurses, as was his step-mother. His maternal grandfather was a psychiatric nurse. Other family members served as aides or porters. “My mother always thought it would be a great thing to have a doctor in the family. I was encouraged and supported to pursue that for our family,” Doodnauth says.

Doodnauth graduated from Harvard where he developed an interest in research. Upon graduating in 1995, he continued to explore medical research, working with Robert Gallo, MD, on HIV-AIDS research during his time at the National Institutes of Health and subsequently the Institute of Human Virology in Baltimore, Maryland. While he liked the science and problem-solving aspects of research, Doodnauth also enjoyed interacting with patients.

“It’s a thinking man’s game,” Doodnauth says of internal medicine. “There are a lot of complex components to disease processes, oftentimes with multiple disease processes occurring at the same time nuanced by socio-economics, gender, and culture. I like that aspect of it.”

“I like the personal aspects of care,” he says. “You can’t do that with specimens or lab animals. That’s why I thought it fit my personality to pursue a career that allowed for a deeper connection.”

Along with being drawn to the “thinking man’s” aspect of internal medicine, he also found the specialty to be practical. “It didn’t make sense for me to be a subspecialist because I would always have family members ask for advice, so I thought it best to be a generalist to some degree,” Doodnauth says, noting that his family emigrated from the West Indies and his wife Christine’s Chinese family are refugees from Vietnam.

He was offered a fellowship in hematology-oncology but chose a different path. “I was headed for more medical training in hematology-oncology when I decided to pursue a business venture that would identify genetic markers for Thoroughbred racing performance. The data would be used to create algorithms to predict ability,” he says. “I would sell that information to breeders and owners.”

That idea led to the creation of LifeLine Genetics. Using umbilical cord stem cells from foals, as well as hair and tissue samples from retired horses, Doodnauth started collecting material that would be used for genetic studies. Today, they have more than 10,000 samples from different horses. In the early stages of the company, Doodnauth was working as a hospitalist in New Jersey and flying to Kentucky frequently to talk to breeders and veterinarians to hone the product. He applied for a position as hospitalist at Bluegrass Community Hospital in Versailles, and Doodnauth and his wife moved to Kentucky in 2006.

“I could be a doctor anywhere,” he says. “Why not settle in a place where I could follow all of my passions?”

After a couple of years in Versailles, Doodnauth moved to Lexington, working as a private practice hospitalist with privileges at Saint Joseph Hospital and Saint Joseph East. Through consults and referrals, his practice – Davanand Doodnauth, MD, PSC – grew from his first consult on October 15, 2010, to what is now CareFirst Medical, PSC.

CareFirst manages nine locations – six in Lexington along with Georgetown, Stanton, and Winchester – and has a team of 14 people, with Doodnauth serving as president and medical director. Wife Christine is the practice administrator.

CareFirst receives 120 to 150 new consults per month in the hospital and has about 1,200 patient encounters per month. Doodnauth, who sees patients both in the hospital and in the nursing home, estimates he sees 12 to 20 patients per day. CareFirst employs three nurse practitioners, two physician assistants, three nurses, and three scribes. Victor Tovar, MD, serves as a second physician on the team.

“Throughout the care spectrum there are shortages, and we don’t know how we are going to solve this problem. The population is living longer, and I don’t know if we’ll have enough hands on deck.”— Davanand Doodnauth, MD, CareFirst Medical.

Doodnauth says long-term care has come with a whole new set of challenges and problems to solve.

“It’s very complex,” he says. “Many of the people that we see at a long-term care facility are actually there for skilled nursing facility (SNF) services. They are recovering from an acute stay at a hospital and may be at the facility for a short period of time or indefinitely if they fail to progress. With hospitals feeling the financial pressure to keep their length-of-stay shorter, the individuals occupying SNF beds are arriving sicker and more medically complex than in years past. The hospitals also get penalized if patients get readmitted in a short period of time, so we feel that pressure as well.”

“There are some people who have undiagnosed psychiatric issues, and there’s no system in place for them long term. They end up in places like a nursing home when they should really be in a psychiatric institution.”

For these patients, Doodnauth says, the solution all too often is medication, which data shows to be ineffective and, at times, even harmful.

“Anti-psychotics are a big issue,” he says. “Not only do they not help with behaviors in most situations, but they can actually be detrimental and lead to one’s demise. I find myself de-escalating a lot of medications because medication interactions and side effect profiles increase with every medicine added. Often times I will see patients who were prescribed a medicine to counteract a side effect of another medication. We want the patients to enjoy their golden years and not be in a fog.”

Doodnauth offers dementia training for nursing home staff, but turnover is high, making the training an ongoing challenge. It’s a challenge that won’t be going away soon. According to Doodnauth, projections are that the percentage of people who will become 80 between now and 2030 will increase 80 percent, but their primary family caregivers will only increase by 1 percent. The result will be a large supply and demand mismatch.

“An avalanche is coming,” Doodnauth says. “We’re not prepared to take care of these problems. We’re not graduating enough doctors. My model has been to accrue talent in terms of extenders and allow them the liberty to practice at the highest level of their training with oversight and guidance. All throughout the care spectrum there are shortages, and we don’t know how we are going to solve this problem. The population is living longer, and I don’t know if we’ll have enough hands on deck.”

Planning for the Next Decade

For his part, Doodnauth is taking aim on this care shortage, attempting to prepare CareFirst for the challenges ahead. He points to the success of protocol-based care in intensive care units and other parts of the hospital and is taking the same approach to post-acute and long-term care.

“I am taking that same concept and trying to apply protocols for post-acute care and long-term care,” he says. “I’m building CareFirst for the next decade. I anticipate a tremendous amount of work, and I want the practice to have a great foundation.”

Part of that foundation is putting together a team that is committed to changing the misconceptions and stigmas about corruption and abuse in senior care.

“There’s still honor and integrity in what we do,” he says. “Day to day I am surrounded by people who are trying to do their best for someone else. Maybe my children will be part of the team one day.”