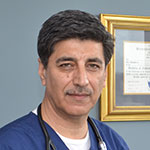 LEXINGTON When it comes to the latest advancements and equipment for his patients, interventional cardiologist Mubashir Qazi, MD, doesn’t miss a beat.

“We’ve always been ahead,” Qazi says of Kentucky Cardiology, PLLC, in Lexington, which he has co-owned with Avi Eres, MD, since 2004. “We want to give our patients the best care possible. Medicine is constantly changing, and that is why both of us study the latest research and are in review committees to stay fully involved in processes we can implement to improve our patient care. That’s why we are still surviving after 16 years.”

Operating as a private practice presents challenges, but Qazi notes the dedication to provide the best available service results in patients coming to Kentucky Cardiology, not only from Kentucky and surrounding states, but also as far away as New York and Florida.

A commitment to putting the patient first drives the decision making, such as when Qazi and Eres decided to get a PET scanner before anyone else in the area.

“It was quite expensive,” Qazi says. “But it provides much clearer images. It reduced the number of interventions or unnecessary procedures so we could give better care to our patients with less radiation and better outcomes.”

Cardiology in His DNA

Qazi learned at an early age the reward of seeing sick patients get better quickly. Growing up, Qazi lost his father, a major in the Pakistani Army, when he was three. He has always looked up to his mom who got him through tough times.

“My mom always wanted me to be a cardiologist just like my uncle,” he says. “We all know about cardiology and how it saves lives. I looked into pulmonary at one time, but rotating with cardiologists was more rewarding for me. I would see people get better immediately. I think that was the kicker. If somebody is extremely sick, you can go in, get them treatment immediately, and see a smile on their face.”

Qazi graduated from Khyber Teaching Hospital in Pakistan. He completed his cardiology fellowship training at West Virginia University School of Medicine and his residency in internal medicine at Ohio Valley Medical Center. Despite having family in Seattle and California, he and his wife, Iram Qazi, MD, chose to move to Kentucky after falling in love with the weather and change of seasons. Qazi brought with him his dedication to always putting the patient first, a lesson he credits to one of his professors.

“My professor, Dr. Abnash Jain, was very well respected,” he says. “From him I learned that you should always respect the body. You should get in and out quickly.”

That same mindset led to Qazi and Eres becoming early adopters of the trans-radial approach for stenting. It’s not the easiest procedure for the physicians, but it provides the best outcomes for the patients.

“The radial approach is better than the femoral approach because it reduces the risk of bleeding,” Qazi says, noting that 85 percent of the interventions he and Eres complete are via radial approach. “Since we started it about six years ago, I have had zero bleeding complications. With the groin that was not the case. It’s one of the highest causes of mortality for people who have these interventions done. For the physician, it’s easier to go through the old traditional way. But we decided if it’s best for the patient, we should go radial.”

Qazi says that, despite a competitive environment and reductions in reimbursement, the patient-first philosophy is what enables Kentucky Cardiology to continue as a private practice. Eighty percent of cardiologists are hospital based, largely for financial reasons, Qazi says.

“Private practices are losing their business because of poor reimbursements,” he says. “Whatever was being paid for a heart catheterization and angioplasty in the 1980s, we are probably getting one-twentieth of that now for the same procedure.”

“Private practices are losing their business because of poor reimbursements. Whatever was being paid for a heart catheterization and angioplasty in the 1980s, we are probably getting one-twentieth of that now for the same procedure.”— Mubashir Qazi, MD, Kentucky Cardiology, PLLC.

Despite those challenges, Qazi proudly says that Kentucky Cardiology is one of the busiest practices in the country. It also prides itself on being the forefront of technology, procedures, and patient-centered as reflected in the message on the practice web site, “Treating you today with tomorrow’s standards.”

Stent Not Always the Answer

Qazi says that philosophy has led Kentucky Cardiology to look at stents differently and to adapt to new procedures that better suit patient needs.

“Most physicians think interventional cardiologists immediately take patients to the cath lab and fix the problem with a stent. But we understand that a stent is not an answer for everything,” Qazi says. “If a patient is stable with stable chest pain or angina, you treat them medically first. If the medical treatment fails, then we check them with a stress test. If there’s a significant problem in the stress test, then we would think about doing a heart cath. But we’re not doing stenting blindly. You have to be true to your patients.”

It’s a mantra that has kept Kentucky Cardiology in business for 16 years and counting. Even as healthcare models and medical procedures change, Qazi and his team are setting the pace.