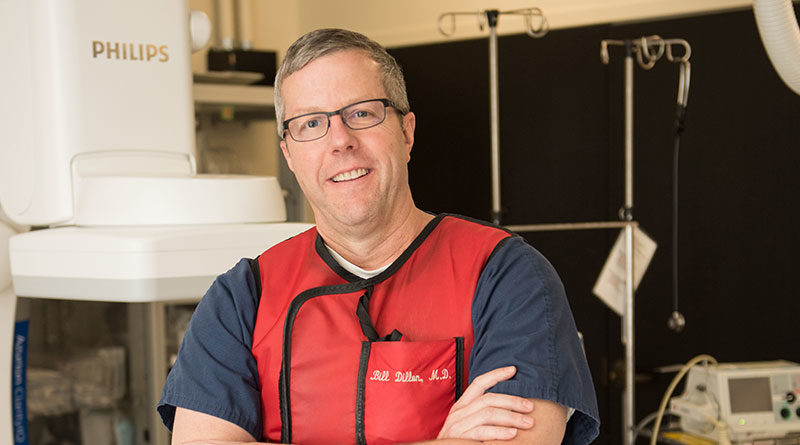 LOUISVILLE. Despite being an interventional cardiologist, director of the Cardiac Catherization Lab (cath lab), and head of the extracorporeal membrane oxygenation (ECMO) team with the Baptist Health Medical Group, William C. Dillon, MD, felt he could further better cardiac outcomes. He says, “At some point when you’re doing this, as you mature, you think, ‘Maybe I can do something more.’” So, Dillon and his wife Sally founded the Start the Heart Foundation.

According to starttheheartfoundation.org, the mission is to “Improve survival from cardiac arrest through training and education.” Dillon explains that a cardiac arrest is when the heart’s natural rhythm stops. When this occurs, rapid intervention is crucial. He states, “Literally seconds and minutes matter. If somebody doesn’t start doing bystander CPR on that person, they have little chance of making it. And, sadly, only about one out of ten people make it. One of the reasons is that we have a very low bystander CPR rate.”

To empower these bystanders, Start the Heart trains and certifies undergraduate students as cardiopulmonary resuscitation (CPR) instructors, who then go into the community and teach the latest hands-only technique. Hands-Only CPR, as opposed to traditional CPR, does not involve mouth-to-mouth, utilizing chest compressions only. In 2010, the American Heart Association recommended Hands Only CPR as the preferred method of resuscitation for lay public responders.

In 2016, Kentucky legislators also realized the need for CPR education and passed Bill 33 making CPR a graduation requirement for high school students. To help facilitate this, Start the Heart instructors have been teaching at high schools throughout Jefferson and surrounding counties.

In addition to the invaluable experience the 105 instructors have gained, the program is having a verifiable effect on the community. “We’ve taught over fifty thousand people in the last five years. And, we know of at least fifteen saves, where somebody we’ve taught has performed hands-only CPR, and the person leaves the scene alive,” says Dillon.

Dillon makes certain to point out that the foundation could not have flourished without city-wide support. “We have had broad support from most of the major health care systems including Baptist Health, Norton Healthcare, KentuckyOne Health, Kindred Healthcare, and the Louisville Metro Council as well as a number of private donors.”

Improving cardiac outcomes is quite possibly in Dillon’s DNA. His father, James C. Dillon, MD, was a professor of medicine at Indiana University in Indianapolis and one of the first interventional cardiologists until his retirement in 2005. “Some people have said that I’m genetically bred to do this, and I think they might be right. It’s the only thing that I ever wanted to do my entire life. And, I’m not even sure what I would have done if I didn’t do this.”

After growing up in Indianapolis, doing his undergraduate work at DePauw University in Greencastle, and receiving his medical degree from the Indiana University School of Medicine (IU), Dillon decided to strike out from his home state. He says, “My dad, who has played a big role in my life, was an interventional cardiologist at Indiana, at IU. So part of the reason I ended up leaving after med school was because I felt I needed to establish myself, on my own during residency.”

So, Dillon headed north to Minneapolis for his internal medicine residency at the University of Minnesota, where he went on to become chief resident. Upon completion of his residency, he returned to Indianapolis for cardiology and interventional fellowships at Indiana University. “It was really the thrill of a lifetime to come back and be able to work with my dad,” states Dillon.

In 2008, Dillon joined Baptist Health Cardiology Group in Louisville. Now, he wears many white coats within the department.

“I see patients in the office,” Dillon says. “But, about half of my time is spent doing procedures in the cath lab. I’m also part of our structural heart team. I perform transaortic valve replacements, known as TVAR.” He continues, “As the medical director of the cath lab, I help run the day-to-day operations. I also run our extracorporeal life support team, or our ECMO team, which can be a truly life-saving intervention for some critically ill patients. “

Advancements in structural heart procedures have made this aspect of the job particularly exciting. “We have a big structural heart team and a very active TAVR program which I’m thrilled to be a part of.” The evolution in the TAVR procedure, which according to mayoclinic.org, “is a minimally invasive procedure to replace a narrowed aortic valve that fails to open properly” is on two fronts—execution and candidature.

On the procedural side, Dillon explains, “The technology is better. The catheters are smaller and more refined. Our average TAVR patient leaves the next day, walks out of the hospital with a new aortic valve, and is fine.” TAVR was once reserved for patients considered high risk, with comorbidities such as stroke, lung, kidney, or heart disease. It is now being performed on low risk patients, who can often return to work in as little as two weeks. After randomized controlled trials, Dillon has deduced, “TAVR works as well, if not better, in low risk people.”

Perhaps his most intense moments on the job are spent as the head of the ECMO team. As stated on baptisthealthcare.org, ECMO “provides temporary support for patients with severe conditions such as severe pneumonia, influenza, massive heart attack or massive pulmonary embolism.” Dillon says of the ECMO presentations, “The patients are incredibly ill and the situation often really stressful. These are often young people. Last year, we saved a 23 year old girl with influenza who would have not have survived without the procedure. That’s the same age as my oldest daughter, so that rings pretty true. To save somebody like that is pretty incredible.”

With his numerous responsibilities, Dillon is clear on the integral role each team member plays in his success. He says, “I once heard, ‘If you want to go fast, go alone. If you want to go far, go together.’ That has really been our philosophy.”

The TAVR team, which is coordinated by Linda Rigdon, RN, consists of an interventional cardiologist, cardiovascular surgeon, anesthesiologist, two nurses, a scrub technician, perfusionist, and other operating room personnel, resulting in a total of 15 individuals bringing their specialized skills to the table. “Our team has been outstanding. I think it’s because of the collegiality, the communication, and the ability to work together,” says Dillon.

Teamwork extends beyond performing operations. Dillon explains, “We review every case every Monday morning with all the surgeons and all the interventionists about whether this is the right thing to do. That is the heart team approach that we’ve taken. It’s led to really good outcomes for us. Our outcomes are as good as anyone in the world.”

To make certain these outcomes continue, Baptist Heath is dedicated to continuing education. Dillon says, “With this profession, you have to stay up to date. You have to continue to learn.” And, for Dillon, the ever-evolving landscape of the field is what makes it so rewarding. He says, “It’s an exciting time. It’s a really great time to be an interventionist.”