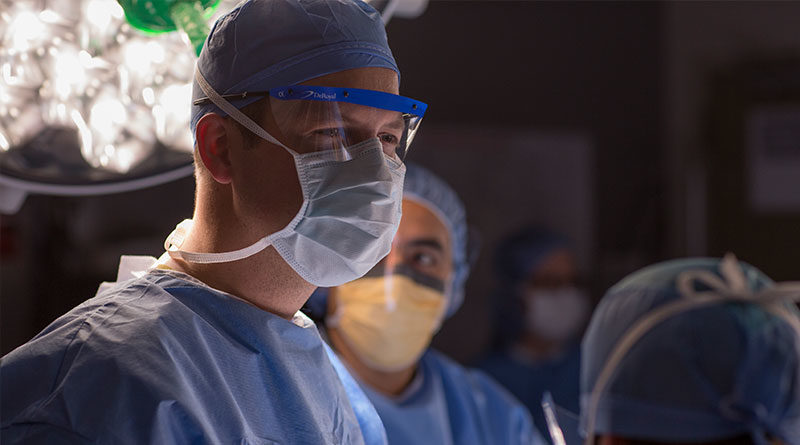 LOUISVILLE For Brian J. Williams, MD, choosing the “nuanced and logical field” of neurosurgery was a no-brainer. “I enjoy working with my hands. And, the brain, the nervous system, and its organization was the subject matter that was by far the most interesting to me. I thought it was a very fascinating subject to dedicate your life to,” states Williams.

He adds, “And, mine is a personality that is very common to neurosurgery, which is driven and very goal-oriented and one that likes to have technical challenges.”

After receiving his medical degree from Baylor College of Medicine in Houston, Texas, Williams took his residency in neurological surgery at the University of Virginia in Charlottesville. Upon returning from an international fellowship at Auckland City Hospital in New Zealand, he completed a fellowship in neurosurgical oncology at MD Anderson Hospital in Houston. Then, in 2016, Williams joined UofL Physicians-Restorative Neuroscience where he is currently a practicing neurosurgeon, as well as the director of the Brain Tumor Center, co-director of the Pituitary and Skull Base Center, and an assistant professor of neurological surgery at UofL School of Medicine.

It was UofL Physicians’ innovative team approach that most appealed to Williams. “I am one member of a team. The team, I think, is the really unique thing about the UofL practice. It creates this group of individuals who can come together and customize the treatment for any patient with any myriad of problems that can come up,” explains Williams.

According to Williams, “This approach engenders a collaborative spirit. It engenders lateral thinking and new ways to solve problems and innovation. So, it is a very fun and exciting group.”

One of the teams Dr. Williams is now a part of at UofL Physicians is the Tumor Board. Other members of this team include an additional neurosurgeon, nurse practitioner, neuro-oncologist, radiation oncologist, cancer rehabilitation specialist, neuropathologist, neuroradiologist, nurse navigator, nutritionist, and even a chaplain. The Tumor Board meets once a week to review specifics, share opinions, and pose questions about complex findings and difficult patients. “The tumor board is where all of us come together to talk about what the problem is, what we each have to offer, and, then we have a clinic where our entire team all see patients together.”

The result is a practice where patients have a host of options, including the latest surgical techniques, readily available making it possible to receive more “expeditious and efficient medical care.”

Williams states, “Medicine is like a buffet for our patients. They can come if they need more of one thing, they can load up their plate with one item, and just a little of the others…or none. Each different time they come back, they can get exactly as much as they need or want from each different person, and they can get it all at the same place.”

This centralized treatment model is only one way that UofL Physicians – Restorative Neuroscience is reaching their goal of not only lengthening lives, but improving the value of those additional months or years. “By limiting the complications of problems that arise by cancer spreading to the brain, we’re not only able to do our part to control the cancer, but to give a better quality of life, and that is really what we’re focused on in terms of neuro—not only quantity, but quality.”

These also include primary brain tumors, which originate in the brain; metastatic tumors that begin in another organ, such as the lungs or breasts; as well as non-cancerous, or benign, growths on the brain, including meningioma that can cause swelling and unwanted symptoms. Two of the more prevalent skull-based pathologies are benign tumors that develop on the balance and auditory nerves, known as acoustic neuromas, and benign tumors on the pituitary gland.

Because the problems Williams treats are quite varied, so is his patient population. Glioblastoma, the most common malignant brain cancer, shows a slight predilection to men beginning at age 65. Women diagnosed with breast cancer, who are primarily between the ages of 45–75, receive ongoing monitoring for manifestations of neurological metastatic cancer. Melanoma, which is influenced by sun exposure and family history, affects both men and women, and is being seen in younger and younger patients.

Aside from UV rays and melanoma, the environmental risk factors for brain tumors are limited. According to Williams, “The only real risk that we know of for developing pituitary or central nervous system tumors is radiation exposure. There used to be some thoughts about cell phones, but that has not panned out in terms of the research.”

Regardless of the type of tumor, technology plays an integral part in the eradication. “Every case we do involves some form of technology. Something as simple as using X-ray or a microscope, or something as sophisticated as using custom-made GPS and laser therapy that’s minimally invasive to treat a tumor problem,” says Williams.

In the short time Williams has been immersed in his specialty, he has experienced the emergence of several technological advances, with two being in the forefront. He states, “The two things that have been the biggest developments over the time that I have been practicing are the general acceptance of stereotactic radiosurgery—that’s a generic word that covers focused radiation, essentially high-dosed focused radiation—and, more recently, laser interstitial thermal therapy.”

Stereotactic radiosurgery (SRS) dispenses precisely focused, high doses of radiation to target tumors using 3D imaging, thus damaging the DNA of those cells while having minimal impact on the surrounding healthy tissue. Similarly, Laser Interstitial Thermal Therapy (LITT) is a less invasive technique using a fiberoptic catheter guided by MR thermal imaging to deliver laser energy, and is often the most viable option for patients with brain lesions that are surgically inaccessible.

“Lasers can be used in an MRI scanner. We can watch heat grow and see where the heat is going, and can control the heat by turning the laser on and off and changing the directionality to heat specific areas,” Williams explains, “These technologies have expanded the number of people we can treat, limited the amount of time they need to invest in our treatments, and hopefully gives them better outcomes in the long run.”

As for the future of his field, Williams is optimistic. He says, “From the time I started and over the fifteen years or so that I’ve been involved in medicine, the field of oncology has made such dramatic changes in the fields of melanoma, breast cancer, and lung cancer. Diseases that once were rapidly fatal diseases are now more chronic diseases with long-term survivors.”

Ultimately, his goal is to provide the best surgical care possible in the present, while preparing for a time when his current services will be obsolete and he will become “a molecular surgeon.” The model, to which Williams was first introduced while attending Baylor College of Medicine, maintains the mission of medicine should be to transition diseases that were once surgical diseases to medical diseases.

According to Williams, “The moonshot idea for any of the cancers that we treat is to take away the pain and suffering of surgery and replace that with the limited pain and suffering of taking a pill or a chemotherapy infusion and provide that as opportunity for people to be treated as well. That is the goal for me personally. Making one contribution that would be meaningful for my patients would be enough for me to say, ‘That’s a good career.’”