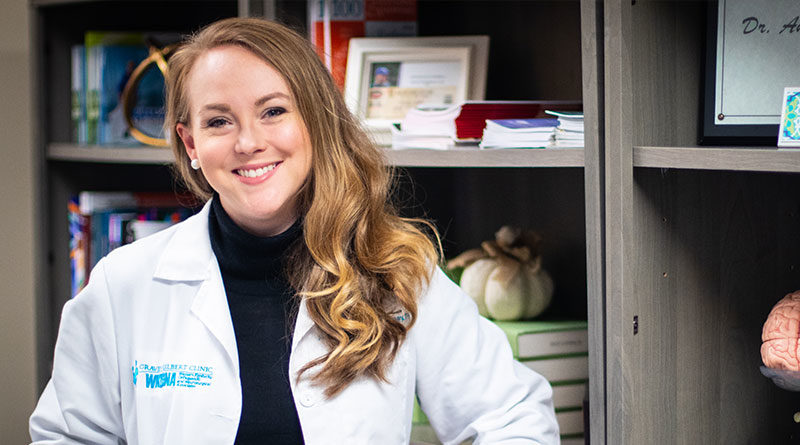 BOWLING GREEN Sometimes, medical diagnosis is straightforward. An x-ray might clearly show a broken bone, an MRI will reveal soft tissue damage. But sometimes, diagnosis is more like detective work. In the crime drama police shows, even the skilled detectives send their evidence to the lab, sometimes to confirm their hunches, and other times to shine light on a baffling mystery. In the medical world, that lab professional might be someone like Amelia Anderson-Mooney, PhD.

A neuropsychologist at Graves Gilbert Clinic in Bowling Green, Kentucky, Anderson-Mooney is licensed to perform psychotherapy, but, as she points out, that’s not her role.

“The role of neuropsychologists mostly is evaluative, it’s diagnostic in purpose,” Anderson-Mooney says. “My specialty is finely tuned to the practical functions of the brain. My role is to be able to see the things that cannot be seen on an MRI. For instance, we know one of the first signs of early Alzheimer’s disease is memory loss. We don’t have a way to take a picture of that or observe that clearly in brief office visits. Once I can determine the extent of the problem, my job is to give an educated opinion as to why cognitive problems are there and what we need to do about them.”

She was recruited to serve as faculty at the University of Kentucky in Lexington. After moving to Kentucky, she met her husband, a native of Glasgow, Kentucky. From there, she decided to move closer to family and Anderson-Mooney joined the team at Graves Gilbert Clinic, where she fills a void, as the only outpatient neuropsychology provider outside of Kentucky’s largest cities.

While she didn’t know where she would land geographically, Anderson-Mooney knew early on that she wanted to specialize in disorders of the brain.

“The inner workings of the human mind have always been fascinating to me,” she says. “Most of the time we make a mistake when we try to separate a patient’s medical issues from the emotional issues because those are all things that happen at a biochemical level in the brain. All of that comes together to determine someone’s daily practical experience, whether they feel forgetful or can’t pay attention or find the word they want when they are having a conversation. All of those things, depending on their severity, can be extremely impairing. Taking all of these factors into account can be critical for how we move forward in diagnosis and treatment.”

She sees patients ages 16 and up and performs differential diagnosis of multiple conditions, including ADHD, early degenerative change such as Alzheimer’s disease, frontotemporal dementia, and dementia related to Parkinson’s disease. She also works with patients who have known brain injuries such as those from trauma or stroke.

Anderson-Mooney meets with her patients for approximately 4–5 hours during the diagnostic process. In addition to talking to them about what they are experiencing, she also conducts an extensive number of tests to help determine the nature and extent of the condition.

Finding the Root of the Problem

The answer isn’t always clear. For example, memory loss can be caused by Alzheimer’s, Parkinson’s, ADHD, a brain injury, depression, anxiety, or other causes. Anderson-Mooney describes the diagnostic process as a tree with each limb representing a possible cause. Her role is to determine the most likely cause and “which limb we need to hang our hat on” in determining treatment.

After making the diagnosis, Anderson-Mooney offers treatment recommendations to the referring provider. Because she must justify medical necessity for any patient she sees, Anderson-Mooney’s is a referral-only service. The referral base is extensive, including neurology and neurosurgery, family medicine, internal medicine, nephrology, pediatrics, geriatrics, pain medicine, psychiatry, oncology, occupational medicine, transplant surgery, PM&R, and orthopedics.

“I’m here to assist and clarify diagnosis and treatment directions in some of our most challenging patients,” she says. “We are trying to tailor an individual approach to each patient that’s most likely to succeed as they move forward.”

Most commonly recommended treatments include medications, physical therapy, speech therapy, occupational therapy, and psychotherapy. However, Anderson-Mooney also sometimes evaluates patients for surgical interventions. One specialty technique is deep brain stimulation (DBS). Often used to treat movement disorders such as Parkinson’s disease, the device utilizes a battery pack that is implanted in the chest. Small electrodes are implanted in the brain into specific areas to help facilitate movement.

“Just like the heart can benefit from a pacemaker, the brain can sometimes benefit from small amounts of electricity that are strategically placed,” Anderson-Mooney says, noting that Parkinson’s patients might suffer from rigidity or tremors. “If we can administer electricity in the right way, sometimes that can help us manage the rigidity or tremor non-pharmacologically. A neuropsychologist can evaluate where the brain is strong, where it’s weak, and if the brain can tolerate the procedure and the stimulations that will follow it. They can also give an opinion on the best placement of the electrodes as well.”

“We place electrodes that record and monitor the electrical activity on certain parts of the brain that are misbehaving,” Anderson-Mooney says. “It can send messages electrically to the brain to head off seizures before they start.”

Some of the referrals that Anderson-Mooney receives are from physicians with patients who are complaining of pain without an identifiable physical cause. Those patients are referred to determine surgical candidacy for procedures such as spinal cord stimulation. If the pain is not physically based, then the procedure might not only be an unnecessary risk and expense, but also will likely be unsuccessful. Anderson-Mooney says that it’s important to understand that the patient’s pain can feel very real despite being rooted in a psychological issue, such as a history of trauma.

“It can be very difficult to help someone understand that the problem they thought was completely physical isn’t,” Anderson-Mooney says. “But it can be an extremely therapeutic experience for the patient and send them on a treatment trajectory that is more likely to be successful.” And to give the patient some much needed peace of mind.