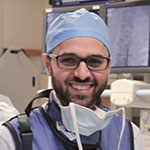 LEXINGTON Though Kentucky and Oklahoma are nearly 800 miles apart, when it comes to the effect of the opioid epidemic, they are far too close. According to Danesh Mazloomdoost, MD, “Both are in top five of the epidemic, have similar demographics, similar distribution of urban to rural environment, and coincidentally, Oklahoma’s rural and impoverished regions are in the southeast, which is where our most rural and impoverished regions are located.”

Mazloomdoost, who specializes in interventional pain, anesthesiology, and musculoskeletal regenerative medicine, is the medical director of Wellward Regenerative Medicine. After receiving his medical degree and completing an anesthesiology residency at John Hopkins Medical Institute, Mazloomdoost went on to pain medicine fellowships at the prestigious MD Anderson Cancer Center in Houston.

In addition to his own extensive work with pain, Mazloomdoost grew up watching his parents, both physicians who owned a pain clinic, treat patients during the changing pharmaceutical climate. Subsequently, his interest in the issue spans decades.

Mazloomdoost explains, “I’ve been fairly vocal in advocating change in the healthcare system around how we approach pain issues, how we consider opioids and how we can take a more proactive stance around understanding the complexity of pain. And, I recently published a book that became a bestseller, “Fifty Shades of Pain.”

Therefore, it is not surprising that Mazloomdoost was recruited to testify as an expert witness in the recent landmark trial in Oklahoma that charged Johnson & Johnson (J&J) with intentionally misleading the medical community and public at large by downplaying the dangers of prescription painkillers and exaggerating the capabilities of the drugs.

After participating in a deposition with other pain specialists last spring, Mazloomdoost was chosen to represent the state by Mike Hunter, the state’s attorney general, as an expert witness. The decision to take the stand was a simple one for the doctor. He states, “Given my background, I have a responsibility, if not an obligation, to provide a medical perspective on how opioids were misrepresented as being both safe and effective.”

The testimony was expected to last one to two hours, but Mazloomdoost found himself in an intense dialogue with J&J’s legal counsel for more than ten hours. “It was a little intimidating at first, but I quickly started to gather that the perspective from which their legal representation was coming, was with a very shallow understanding of the topic. And, it was very reflective of the same kind of mantras and soundbites that they utilized throughout their marketing campaign.”

In the end, Mazloomdoost stood firm on the scientifically-supported facts and pharmacokinetics. “It was very easy to poke holes in their argument,” he states, “The notion that a pill can cure pain indefinitely and without consequence is as flawed as treating a broken leg with an opioid instead of a cast.”

Finding J&J breached the state’s “public nuisance” law with their aggressive and misleading marketing, Judge Thad Balkman agreed and ordered the pharmaceutical powerhouse to pay $572 million in fines to repair the damages to Oklahomans by the opioid epidemic. The money was allocated in the settlement to pay “clean-up,” such as addiction treatment, drug court, and medical and family services for affected children.

Initially, the state sought $17 billion in damages, which Mazloomdoost feels would have been a much more appropriate sum. “We’re not even talking about the cost of lives that have been lost, the productivity, the impact it had on families, but just the cost of cleaning up the mess they’ve created is far, far greater than the verdict.”

One of the most shocking elements of the case involves the level to which J&J was involved with the proliferation of opioids. During the course of the trial, it was revealed that the company not only manufactured the synthetic pain medicine Fentanyl, but was instrumental in producing the needed opium for all opioid manufacturers. According to the New York Times, “Johnson & Johnson, which contracted with poppy growers in Tasmania, supplied sixty percent of the opiate ingredients that drug companies used for opioids like oxycodone.” In Mazloomdoost’s words, “’Rising tide lifts all ships’ really resounded in this case. There is ample evidence that at every layer of this whole system there was an influence that went beyond what was judicious.”

For Mazloomdoost, this win signals just the beginning. He states “Oklahoma’s ruling against Johnson and Johnson is a bittersweet victory. Yes, it acknowledges the hardships endured by affected families. Yes, it validates the voices decrying opioids as a harmless cure-all. Yes, it allocates resources desperately needed to slow the momentum of a derailing train of patients. But, this is just a small step in a long journey that stands before the problem solvers of this crisis.”