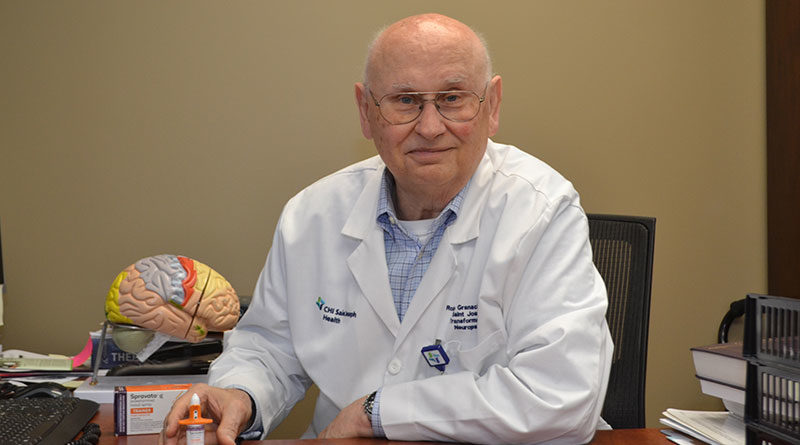 LEXINGTON When people hear the word “psychiatrist,” many still conjure up the image of a patient reclining on a couch while a bespectacled gentleman smokes a pipe and listens to them recount their childhood problems. In opening the Transformation Care Center (TCC) at Saint Joseph East, Neuropsychiatrist Robert Granacher, MD, MBA, is eager to dispel this misconception. He states, “Psychiatric medicine is becoming very scientific. We’re medical doctors, and we tend to treat people with medical problems. We don’t do couch work.”

Granacher, a Kentucky native, attained his medical degree from the University of Kentucky College of Medicine, where thereafter he was a resident and chief resident in psychiatry. He then transferred to Harvard with its affiliate, Massachusetts General Hospital, in Boston and further completed a residency and fellowship in psychiatry and psycho-pharmacology. After returning to Lexington, Granacher flourished in private psychiatric practice until 2014. Along the way, he gained an MBA from the University of Tennessee at Knoxville and an additional board certification in neuropsychiatry in 2006.

In 2018, Saint Joseph East established a psychiatric clinic that would serve not only the hospital outpatient clinics, but the community and state at large, by offering advanced psychiatric treatments that are normally only available in much larger cities. “I was fascinated with that opportunity and challenge and did not want to retire,” says Granacher.

And thus, the Transformation Care Center (TCC) came to being.

“This clinic is cutting edge. Most of my patients come from a neurologist, so many are brain damaged and also have behavioral problems,” Granacher says. “What we do here is see very sick people. They have psychiatric illness, but they also have multiple sclerosis, Parkinsonism, Alzheimer’s disease, frontal-temporal dementia, traumatic brain injury, and on and on.”

The clinic also utilizes a cognitive testing laboratory to asses a patient’s ability to function by testing their memory, language, attention span, mental processing speed, etc., and then statistically comparing those to a functioning person of the same sex and age. “If you look at an MRI of the brain and the doctor sees something is wrong, unfortunately that MRI won’t tell you if the patient can think and can process information, or make a decision. You have to do functional mental tests,” says Granacher.

The Transformation Care Center is developing two innovative treatments for the effective handling of “treatment resistant depression,” which Granacher explains as depression that, due to repeated treatment with different anti-depressants, has become resistant to drugs. Granacher states, “Each time you change an antidepressant your response rate drops. After the fourth antidepressant, your probability of response is less than ten percent.”

This is becoming more and more widespread. According to Granacher, “Now, in the United States, one-third of all depressed patients are treatment resistant. So, with sixteen million depressed people, that’s five to six million people.”

According to mayoclinic.org, “Transcranial magnetic stimulation (TMS) is a non-invasive procedure that uses magnetic fields to stimulate nerve cells in the brain to be less active and improve symptoms of depression.”

“There’s more than one way to treat people who have serious mental illness.” — Robert Granacher, MD

During a session, the patient is taken to an exam room, seated in a chair similar to that which you would find in a dentist’s office, and made comfortable. Then, an electromagnetic coil is placed against the scalp in a premeasured optimal location. Granacher states, “The depression center is right between the eyes on the bottom of the brain, above the eyes so it is easy for us to find. We map the brain and lock that into the computer.” Then, the NeuroStar™ system delivers a painless magnetic pulse to reduce the activity in the brain region where depression originates. Following the treatment, the patient may immediately drive themselves home.

The second breakthrough is Spravato™, a nasal spray form of esketamine, Granacher explains, “Spravato™ is used for a treatment-resistant patient who has failed two or more antidepressants within their current episode of depression, but they must be on an antidepressant when you use it.” He adds, “It is especially effective in the suicidal patient. If someone is suicidal, after the first treatment, seventy percent will not have suicidal thoughts. After the second treatment, it’s one hundred percent.”

For safety purposes, Spravato™, a DEA Schedule 3 drug, is administered at the St. Joseph East hospital, in the infusion center, under close observation. Additionally, the patient must be monitored for two hours, before being driven home by a third party.

Ultimately, the Transformation Care Center, which is in a “period of development,” is all about accessibility and options for Kentuckians. Granacher states, “If you have a depression or other serious mental illness, we want to offer more than one way to skin that cat, if you will. There’s more than one way to treat people who have serious mental illness.”