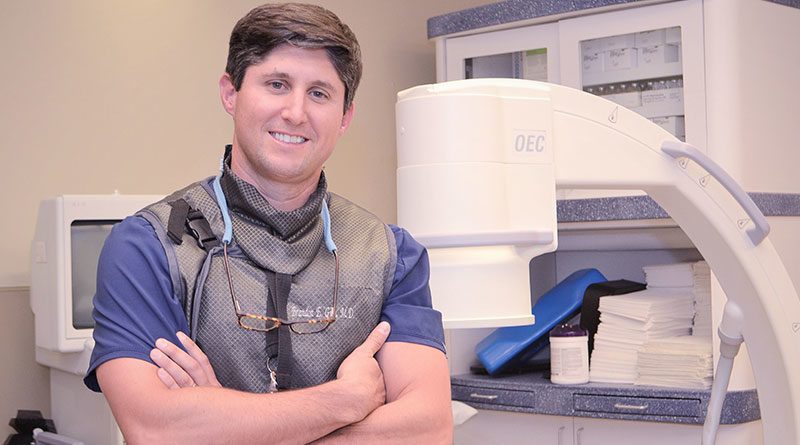 LEXINGTON There’s a reason pain is a four-letter word. No one likes it and it sometimes makes us say, well, other four-letter words. Despite the “no pain, no gain” encouragement from coaches and trainers, few of us embrace or enjoy being in pain. Pain can be annoying, acute, frustrating, debilitating, temporary, or chronic. In each case, we simply want it gone, or at least reduced. While there are well-known medicinal short-term aids, long-term pain solutions can be more complicated. That’s when it’s time to call someone like Brandon Gish, MD, a dual board-certified pain management specialist at Commonwealth Pain and Spine in Lexington, Kentucky.

“The first question we ask is ‘How long has the pain been there and how does it present?’” says Gish, who also travels to see patients in Elizabethtown and London. “I like to ask ‘How does this get in the way of your life?’ because a lot of the answers are in what provokes the pain.”

Gish says he likes to identify what activities most amplify the pain so he can help the patient return to their normal activity and quality of life.

“Ultimately the body is meant to be in motion,” Gish says. “That is paramount to recovery. A lot of times activity prevents people from ever having to come see me. Whenever a patient comes into our clinic, we are going to identify ways that we can help get the body in motion. It has a pretty powerful way of healing itself.”

He says his move from anesthesiology into pain management stemmed from a desire to be able to talk to patients and identify practical ways to improve their lives.

“I like the option to interact with patients,” Gish says. “I feel like we are able to make a pretty big impact in people’s lives.”

His patient population consists of all ages presenting with pain in any part of their body. A typical day consists of half the day in the clinic seeing patients and the other half of the day spent in the procedure room doing injections. He also frequently performs spinal cord stimulator implants at Lexington Surgery Center or Kentucky Surgery Center.

While the common impression is that Gish and his team are primarily prescribing pain medication, he stresses that is seldom the approach. Instead, the intent is to help the patient in other ways that represent better long-term results with less potential for negative side effects.

“I am typically a minimalist when it comes to medicine,” Gish says. “We are much more of an interventionalist operation, because we see the most benefit from that. There are a lot of side effects to some medicines that work counterintuitive to what we want, which is the body in motion.”

Describing opioids as “a quick fix, not a sustainable plan,” Gish works closely with the primary physicians and physical therapists. Together, they identify the root causes of the patient’s pain and determine the best long-term solutions to reduce or eliminate it. In addition to treating back pain, Gish also treats joint pain, nerve pain, and migraine headaches.

As the practice name suggests, however, chronic back pain is a staple presentation of Gish’s patient population. Often caused by arthritis, chronic back pain is treatable via facet rhizotomy, epidurals, or neuromodulation. Gish describes the facet rhizotomy as “turning off the joints of the low back for a long period of time, allowing the patient to strengthen muscle.” Both facet rhizotomy, epidurals, and dorsal column spinal cord stimulation are established procedures. A relatively new form of neuromodulation is dorsal root ganglion (DRG) stimulation.

“DRG is more specific for focal pain, such as someone who has chronic pain after a hernia repair, chronic foot pain – very specific pains,” says Gish, who completed special training to learn how to implant the device. “At the point where either medicines aren’t helpful or there are side effects, this is a non-medicine way that really can change the way that folks are able to function. I’ve had a lot of pretty successful situations with DRG that were previously very difficult to treat. The biggest impact we’ve had is with neuromodulation techniques.”

A Team Approach to Pain

When patients first come to Commonwealth Pain and Spine, Gish and his team focus on reproducing the pain to understand its source. The ensuing steps include activity modifi cation and conservative medications such as anti-inflammatories and muscles relaxers. An MRI then assists with determining if the back pain is a facet joint issue or a disc issue. It’s noteworthy that prescribing pain medication is not the primary form of treatment.

“There are lots of non-opioid medicines we use before we would ever think about opioids,” Gish says, noting that a common misconception is that pain clinics primarily prescribe pain pills. “Certainly, we are supposed to be the experts in pain medications, but that is a minority of what we are focused on and of what we are using to treat on a regular basis.”

Gish says another misconception is that the pain clinic is a last option of sorts.

“The assumption is that you have to be really bad off before you get here,” he says. “But I would encourage other providers to involve us as early as possible. A patient doesn’t have to be debilitated before they can come here. We would prefer to be in on the front end to guide the patient through a treatment algorithm in a conservative way. That’s going to greatly reduce the opioid epidemic.”

Gish adds that therapies such as Tai Chi, yoga, and mindfulness therapy are viable alternatives for many patients. “There’s good evidence that these are sometimes better forms of treatments than medication,” he says.

That comes as little surprise to Gish, who is a proponent of the healing powers of the body, which is activated through exercise and activity.

“Continued activity is what builds muscle, it’s what improves metabolism and activates your own endorphin system,” Gish says. “There are a lot of ways to manage pain long term with activity modification. The body is a pretty powerful thing.”