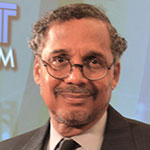 LOUISVILLE From the first moment that Wayne Tuckson, MD, colorectal surgeon at KentuckyOne Health Colorectal Surgery Associates in Louisville, speaks, it is clear that he has a vision and desire to make a positive lasting impression on healthcare in Kentucky.

“I’m just a humble colorectal surgeon who is very much interested in healthcare disparities and what we can do to correct them,” says Tuckson, who attended the Howard University College of Medicine.

In addition to his practice, Tuckson has hosted “Kentucky Health” on KET for more than two decades. On the show he invites other physicians, community leaders, and politicians for conversations about healthcare in the state. The overall concept is to inform and educate the state’s population about health and healthcare, which he believes is a critical step to decreasing disparities in health outcomes. Data shows that healthcare outcomes for African Americans and people of lower socio-economic status are worse than those of the overall population. Tuckson believes that, in this case, knowledge is power.

“The health IQ in our community is bad,” he says. “When you look at people who do well, they tend to have a better understanding of what normal body function is, they are not intimidated by the healthcare system, and they tend to be more engaged with the healthcare system. These are people who tend to be better educated and better off financially. I can’t make anybody rich, but I can help educate people.”

Tuckson believes so much in what he’s doing because he has seen it work first hand. In 2004, he participated in the launch of the Kentucky Colon Cancer Prevention Project, led by his colleague Whitney Jones, MD, gastroenterologist at Gastroenterology Health Partners in Louisville.

Jones spearheaded the Colon Cancer Prevention Project because of his belief that “We’re spending a lot of money on insurance, but not enough on cancer prevention. The cost of cancer treatments totally overwhelms the cost of prevention,” says Jones. At the time the project launched, Kentucky ranked last in the nation in colon cancer prevention statistics and had the highest rates of incidence and mortality in the nation.

“Whitney was sick of seeing people come in with advanced disease,” Tuckson says of Jones. “He was sick of having that conversation, of sending patients to a surgeon like me.”

The ongoing work of the Kentucky Colon Cancer Prevention Project includes education, advocacy, survivor support, and health system change. The impact of the project is reflected in the state’s improvement versus the rest of the country. Kentucky now ranks 17th best in the nation in the same colon cancer related categories and earned an American Cancer Society Achievement Award for the most improved state in the nation for colorectal screening over the past 15 years.

“There are very few people we will meet in our lifetime of whom we can say this person made a difference in the health of our state,” Tuckson says. “Whitney Jones is one of those people. He saw a problem and he organized a method to correct it. What the Colon Cancer Prevention Project did was mobilize physicians and hospitals and other interested individuals to say, ‘We have to correct this problem.’ Whitney was able to get a bunch of doctors to work together to make sure we were getting more patients in for screening. There are people alive because of the Colon Cancer Prevention Project.”

Tuckson said the next step in prevention of colon cancers and other cancers is to use genetic testing to identify individuals at high risk for these cancers, thus preventing these cancers.

“There are people who are genetically predisposed to develop colon cancer. We need to identify them,” Tuckson says. “We need to start pushing people like our front-line clinicians and primary care doctors to order the screening for their patients so we can look for these gene alterations.”

Tuckson believes the same model of statewide collaboration between healthcare systems, medical professionals, and legislators can make Kentucky a leader in genetic screening. In addition to being better for the health of the state’s citizens, it also will help the state’s economy, Tuckson says. He cites the example of a colon cancer patient who might require $50,000 to $75,000 in medical care. Physically, that patient is unable to contribute to the economy and likely represents a net drag on the economy.

“If you look at this strictly in terms of dollars and cents, what we spend to keep a person from developing colon cancer so that person doesn’t require chemotherapy, radiation therapy, or surgery, saves money,” Tuckson says. “Saving lives is the single most important thing, but if we don’t have the money, we can’t save the lives. That is why our legislators have recognized that this is a matter of common sense. We are keeping people alive while also improving productivity and cutting costs for our healthcare system.”

How will Tuckson’s mission to improve the health IQ of Kentuckians reduce disparities in healthcare outcomes? Stay tuned.