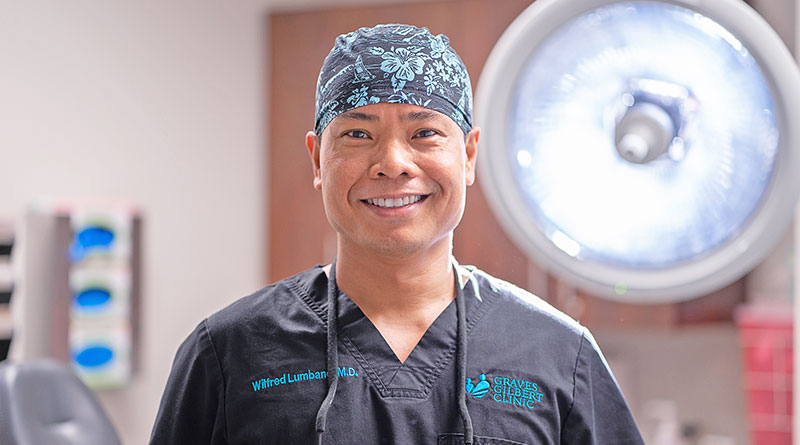 BOWLING GREEN Dermatologic surgeon Wilfred Lumbang, MD’s career path has taken him around the world, but he is pleased to have landed in Bowling Green, Kentucky. “I grew up on a tiny little island in the Pacific, and I love smaller communities. I thought I would be more useful here than anywhere else. I feel very fulfilled at Graves Gilbert Clinic,” he states.

Lumbang received his earliest education in Guam. While he had his eyes initially set on graphic arts and architecture, he says, “Great teachers and mentors opened my eyes to math and science, and I became intensely focused on academics.” This dedication garnered him a full scholarship to the University of Guam. He then received his medical degree from the University of Vermont College of Medicine. While in medical school, he was commissioned as an officer in the United States Navy. Lumbang went on to complete his medicine internship and residency in dermatology through the Naval Medical Center San Diego. Prior to residency, he spent three years traveling the South Pacific as a battalion surgeon for the United States Marine Corps. From 2007 to 2010, he served as the head of the Dermatology Department at the Naval Health Clinic Great Lakes, Illinois.

After completing ten years of military service, Lumbang headed to Vanderbilt University Medical Center in Nashville, Tennessee to further his training on skin cancer surgery. He states, “I was really drawn to Vanderbilt because it was a very intensive program on Mohs micrographic surgery with emphasis on complex skin cancers that develop among solid organ transplant recipients.” Upon finishing his fellowship in Mohs micrographic surgery and cutaneous oncology, he ran the transplant dermatology clinic and trained both residents and surgical fellows on skin cancer surgery from 2011 to 2015.

Then, once again, he knew it was time for a change. Lumbang explains, “When working for big institutions, like the military and then Vanderbilt, you lose yourself somehow in administrative duties. I’ve always been a people person. I want to talk to people, not paper and pencils.” He also recognized the need for his specialty in smaller communities. “No matter where you go, there is always a shortage of dermatologists.”

After researching various facilities, he found Graves Gilbert Clinic to be a perfect fit because of its patient-focused philosophy.

The majority of Lumbang’s patients are referred with biopsy-proven skin cancers. Many of his patients from Nashville have followed him to Bowling Green. “As a Mohs surgeon, I perform three roles for a patient. First, I remove the skin cancer in stages. Second, I am the pathologist that looks at the margins and makes sure the margins are all clear. And, then third, I reconstruct the defect created after I’ve removed the skin cancer.”

Aside from surgery, Lumbang considers educating both physicians and patients to be a large part of his job. For physicians, he wants to impart the efficiency and effectiveness of Mohs surgery. He states, “It is a single visit, outpatient surgery. You don’t need to be in the hospital. We only use local anesthesia, so we do not expose the patient to prolonged general anesthesia. And, we can clear the margins on the same day. The lab work is done on-site, on the same day, so patients don’t have to wait for the results for days or weeks. And, it also offers a very high cure rate—up to ninety-nine percent for tumors that have never been treated before.”

He also stresses the importance of screening, early detection, and counseling. “About ninety percent of non-melanoma skin cancers are associated with ultraviolet radiation from the sun.” He adds, “Most skin cancers can be prevented. I think part of general counseling in the primary care setting should be about sun protection—about avoiding tanning beds, using sunscreen, and protective clothing. A great deal of focus should be on prevention through public education.”