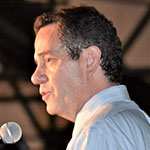 LOUISVILLE Jason Chesney, MD, PhD, is the director of the UofL James Graham Brown Cancer Center (JGBCC) and associate VP of health affairs at the University of Louisville. Chesney’s research into immunotherapy for treating cancer has propelled the JGBCC into a leadership role in testing cytotoxic T cells and “immune checkpoint inhibitors.” In a global study of 700 melanoma patients at 113 sites, JGBCC was the lead center worldwide. It finished accrual of patients in March 2018.

In July 2019, Chesney spoke to a group of Louisville area residents at the monthly “Beer with a Scientist” program coordinated by Levi J. Beverly, PhD, associate professor at UofL and co-leader of the Experimental Therapeutics program at JGBCC.

According to Chesney, the human body has 100 billion cytotoxic T cells whose job it is to kill virus-infected normal cells AND cancer cells. Both of these cells express non-self or foreign proteins that allow T cells to see them. Unfortunately, cancer cells develop ways to avoid detection by T cells, allowing the cancer cells to grow into tumors and spread to vital organs. Cancer immunotherapies work by activating cytotoxic T cells against cancer cells through a variety of mechanisms.

“Moving 1% of the defense budget to the NCI, the National Cancer Institute, would double the U.S. budget for cancer research and reduce cancer-related deaths not just in the U.S., but worldwide”— Jason Chesney, MD, PhD

Chesney says that immunotherapies being developed at the UofL Brown Cancer Center involve various approaches to activate cytotoxic T cells. These include:

Is TVEC the Answer?

TVEC, Talimogene laherparepvec, is an oncolytic virus engineered to express GM-CSF which leads to CD8+T cell activation. The question and goal of current research underway at the UofL Brown Cancer Center is to determine the efficacy and safety of TVEC in combination with immune checkpoint inhibitors.

“For every dollar we spend on national defense, we spend one penny fighting cancer,” says Chesney. “In the last 100 years, beginning with World War I through Vietnam, both Gulf wars and Afghanistan, there have been 1.8 million combined military deaths, whereas there have been more than 60 million U.S. civilian deaths due to cancer. Moving 1% of the defense budget to the NCI, the National Cancer Institute, would double the U.S. budget for cancer research and reduce cancer-related deaths not just in the U.S., but worldwide.”