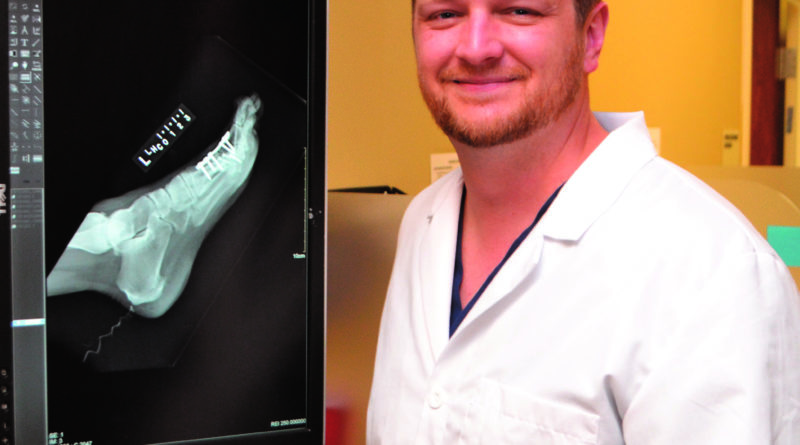 WINCHESTER As a foot and ankle specialist with training and experience in performing ankle replacements, David Hamilton, MD, knows a little bit about the importance of a good fit. The right fit is important for flexibility, stability, and long-term health.

That’s the kind of fit that Hamilton looks to be as he joins Kentucky Orthopaedics & Spine (KOS) serving the Central Kentucky markets of Winchester, Georgetown, Versailles, Paris, and Richmond.

“One of the things I really like about the practice is its geographic reach and subspecialty coverage,” Hamilton says of Kentucky Orthopaedics & Spine. “The fact that one practice can have someone who is well versed in sports procedures, joint replacement procedures, and spine procedures is really appealing to me. I hope to supplement the treatment that is currently offered by the practice by performing some of the more specialized and difficult foot and ankle procedures.”

Hamilton joins KOS fresh on the heels of completing a foot and ankle fellowship at the University of Pittsburgh Medical Center. The move represents a homecoming for Hamilton, whose family moved to Lexington when he was 10. He attended the University of Kentucky for undergraduate, medical school, and residency. He also was part of the Kentucky football team, serving as the scout team quarterback.

His career, though, was destined to be in the medical field. The son of a veterinarian father and pharmacist mother, he had aspirations to be a general surgeon. The first time he scrubbed into an orthopedic operating room, however, he found that orthopedics was his calling.

“Orthopedic surgeons are often described as the carpenters of surgeons,” Hamilton says. “We tend to have more engineering type minds and think of things structurally. Those were all things I liked to do growing up. Once I saw it happening in the operating room, I became enamored with it.”

“It’s never really one cause that ends up giving you the full compilation of problems that a patient presents. Something as simple as having a tight calf muscle can end up leading to a bunion deformity which can lead to mid-foot arthritis.”— David Hamilton, MD, Kentucky Orthopaedics & Spine

He completed his orthopedics residency at the UK in 2018, then sought a fellowship to help him specialize in the foot and ankle. “I realized that the foot and ankle specialists incorporate all the other orthopedic subspecialties into their practice,” he says. “They do arthroscopy, trauma, and joint replacement surgery. That really appealed to me.”

Hamilton’s path to Kentucky Orthopaedic & Spine was fairly natural. David Waespe, MD, another member of KOS, played baseball at UK and played ball with Hamilton growing up. Hamilton met the other partners Gregory Grau, MD, and James Rice, MD, during his UK residency.

Hamilton says he expects his patient population to be all ages, including young athletes, adult laborers, women with bunions or flat foot, and patients presenting with ankle arthritis.

Problems that Start with the Foot

“Foot and ankle problems are not isolated to the foot and ankle,” Hamilton says. “They tend to throw off the way a person walks which can lead to hip, knee, or back pain. Something as simple as having a tight calf muscle can end up leading to a bunion deformity which later leads to mid-foot arthritis, for example.”

The complexity of foot and ankle issues can come from an array of causes, including genetics, a patient’s lifestyle, shoe selection, and trauma. In patients with poorly controlled diabetes, neuropathy can result in the patient developing ulcers.

“There are conservative approaches like bracing and shoe wear that we can try,” Hamilton says, “But once we recognize that the foot deformity is so bad that they are at risk of developing an ulcer, we can intervene to take pressure off the area that is likely to ulcerate and prevent patients from getting an ulcer in the first place.”

Hamilton believes it’s important for patients to understand the risks and rewards of conservative and more aggressive treatments. “My overall philosophy of care is to educate patients what they can expect with non-surgical or conservative treatment versus surgical treatment,” he says.

While ankle replacement surgery wouldn’t be considered conservative, it is no longer the rare last-resort alternative it used to be. Hamilton says an example of an ideal candidate for ankle replacements would typically be someone over the age of 50 with end-stage arthritis.

A typical ankle replacement surgery involves removing arthritic bone from the tibia as well as from the talus bone. The removed bone is replaced by two metal components with a piece of plastic in between. Some ankle replacement systems rely on custom 3D-printed jigs that fit within the joint to guide the alignment during surgery.

“The custom-printed template will ensure the patient’s ankle implant fits them perfectly and is optimally placed,” Hamilton says. “That’s one thing I was excited to learn during my fellowship and I’m eager to bring to my patients in Kentucky.”

A Path to Giving

Hamilton also intends to bring a charitable program he participated in while in Pittsburgh to Kentucky. One of the doctors he worked with in Pittsburgh was orthopedic surgeon Stephen Conti, MD, who helped his son form Our Hearts to Your Soles in 2004. The purpose of the organization, which has been spreading across the country, is to provide those less fortunate with shoes and free foot examinations.

“Dr. Conti has collaborated with different shoe retailers to offer homeless people in Pittsburgh boots and shoes prior to the winter months,” Hamilton says. “Traditionally his fellows have taken that program to their home communities, and that’s something I’m planning to do in Kentucky.”

Clearly, Hamilton is eager to contribute to Kentucky Orthopaedics & Spine as well as to his new community. He’s already putting his best foot forward.