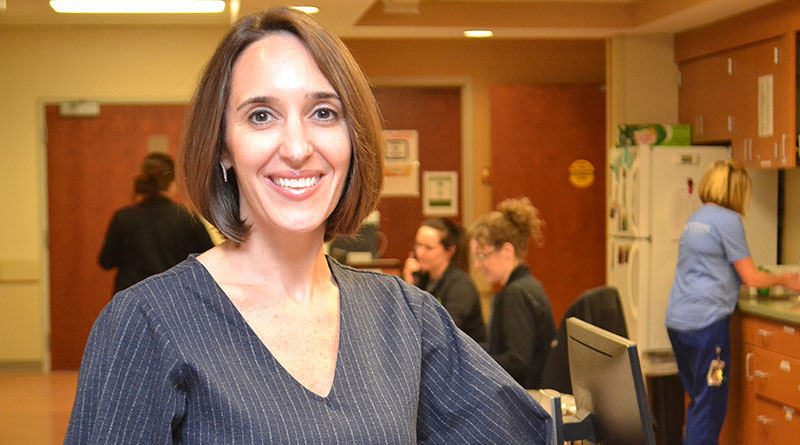 Her early interest in medicine was piqued when her cousin, Anna Feitelson, MD, a Louisville OB-GYN, discussed her medical school training at family dinners. Carrara remembers being fascinated when Feitelson recounted gross anatomy lab details and was inspired by her cousin’s medical training and experiences.

The Louisville native stayed close to home throughout her education and career, receiving her medical degree, residency, and fellowships from the University of Louisville. Before landing on the gastroenterology discipline, Carrara had different plans: “I started medical school to become a pediatrician. On my first day of my pediatric rotation, I changed my mind. I knew I loved children but would prefer to treat adults and adolescents.”

Going with the Gut

The complexity and variety of GI and liver diseases fascinated Carrara. Carrara serves a dire need for experienced GI doctors within the Ohio River Valley and greater Louisville regions, one of the nation’s hotspots for obesity-related epidemics such as colon cancer and non-alcoholic liver disease.

Carrara’s discipline requires both a compassionate and intimate doctor-patient relationship as both parties decipher symptoms that add up to an intricate puzzle. Since gastroenterology is also a procedural field, she also offers endoscopic diagnostic and therapeutic procedures.

Carrara sees diverse disease presentations, from acute to chronic, organic to functional to hereditary, mild to severe. Because many women prefer a female doctor, especially when discussing sensitive topics like GI troubles, Carrara has noticed a trend in her patient population. “I’d say about 80–90 percent of my patients are female,” she says.

Women often discuss more than gut health with their gastroenterologists, since they experience related, gender-specific issues. For example, fluctuating female hormone levels can complicate GI symptoms. Carrara says that these cyclical fluctuations can cause varying bowel movement issues — from diarrhea to constipation.

Carrara addresses the unique needs that pregnant women face, including deciding to whether or not to continue taking their GI medications during pregnancy. “We’ve also seen problems like gallstones, liver issues, and more that initially present during pregnancy,” she explains.

Functional gastrointestinal diseases or conditions in which doctors can’t pinpoint a root cause, even after a thorough evaluation, are more common among women. One functional illness that physicians have noted in more women than men is IBS, irritable bowel syndrome. Many doctors believe that IBS could stem from psychological issues such as anxiety or depression. Carrara takes a multi-disciplinary approach to tackle such illnesses, sometimes starting with one large modifiable risk factor: the mind. She encourages stress reduction through exercise or engaging in hobbies as well as a healthy, balanced diet.

Carrara asks patients to take note of the many ways that psychological distress, like depression and anxiety, affects them. “Anxiety can contribute to nearly every gastrointestinal symptom and heighten each one.” When patients start learning from their behavioral patterns, they reduce stress and notice improvement in their GI health.

Psychological and behavioral factors impact younger patients, like adolescents and children, since behavioral modeling plays a role. For example, if a young patient observes parents struggling with painful bowel movements and constipation, children may develop anxiety toward bowel movements.

“We don’t spend much time talking about genetics because it’s not a modifiable risk factor. In GI, when we talk about managing a disease state, we talk about the risk factors that are identifiable and those that aren’t,” says Carrara.

“Anxiety can contribute to nearly every gastrointestinal symptom and heighten each one.”— Emori Carrara, MD

She adds, “I prefer to start discussing what patients can change before launching into treatment options, especially with my young, adolescent patients.” Carrara advises lifestyle modifications first, such as diet, exercise, and managing stress levels, so patients can make changes and monitor progress outside the clinic. Medications are prescribed as well.

Consider acid reflux, for example. With the correct medications, diet, and lifestyle habits, patients can self-treat many of the most bothersome reflux symptoms. Eliminating American dietary staples such as caffeine, carbonation, chocolate, alcohol, and greasy food can minimize symptoms.

Though she focuses less on inherent risk factors, Carrara still advocates testing for genetic components and advises counseling based on the results. Colon cancer, for example, runs in families, and many individuals benefit from awareness and early detection.

Carrara predicts successful outcomes for non-alcoholic steatohepatitis, often called NASH, which is characterized by liver inflammation and, if untreated, can lead to cirrhosis. Significant research is focused on medical treatment for NASH, and GHP is involved in these clinical trials. Crohn’s disease and ulcerative colitis might also find pharmaceutical cures. Carrara and her colleagues run clinical trials as they hope to help discover life-changing medications for their patients.

Carrara, a firm believer in preventative care, urges other doctors to collaborate with gastroenterology professionals upon detecting anything unusual, from colon cancer signals to elevated liver enzymes.

Carrara does express some concern with one popular, mass-advertised measure: Cologuard, a home colon cancer screening kit, which has created some false positive results. Also, some insurance plans count Cologuard as a screening, so patients could pay significantly more for colonoscopies during follow-up visits.

However, she sees the pragmatic value of any screening method that could benefit patients. As a gastroenterologist, she says, “The best screening test for colon cancer is the test that the patient will actually use. Having said that, colon cancer can be prevented with a colonoscopy as we are able to remove polyps before they can develop into colon cancer. That’s one of the most important things I do in my job: help prevent colon cancer.”