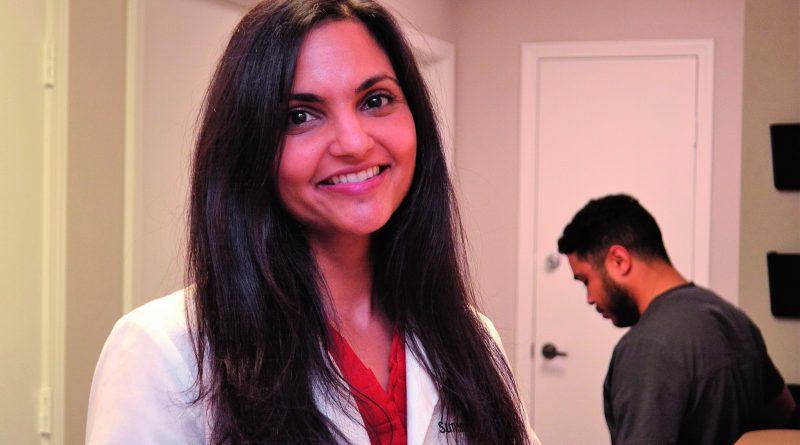 LOUISVILLE It is comes as no surprise that Sunana Sohi, MD, became a doctor. Born and raised in Louisville, Sohi often went to work with her cardiologist father, Gurbachan Sohi, MD.

“When I was a kid, my dad would take me with him to the cath lab, and I would sit behind the shielded area and watch him do his procedures,” Sohi recalls. “When I was a little older I started volunteering at the hospital. I’ve always been exposed to it and had a desire to help people. Medicine just always seemed natural for me.”

Sohi majored in psychology at Harvard with an eye towards becoming a psychiatrist. She attended medical school at Tufts

University in Boston. There, she met and fell in love with her husband, Gregory Sulkowski, MD, an ophthalmologist who specializes in glaucoma.

She also fell in love with internal medicine. She proceeded through the subspecialties, ultimately finding gastroenterology to be the right fit.

“A lot of times when I tell people what I do, they’re like ‘Eww, gross!’” Sohi laughs. “But this specialty is so great on so many levels. One, it’s procedural, so I get to do things with my hands. There’s also that cerebral nature that you get out of internal medicine. Gastroenterology is fascinating. It affects people on a quality of life level in a way you wouldn’t necessarily think of.”

Sohi sees those life-impacting conditions on a daily basis in her practice at Louisville Gastroenterology Associates, a division of Gastroenterology Health Partners. Practicing there since 2010, she treats a variety of conditions including irritable bowel syndrome, heartburn, inflammatory bowel disease, incontinence, hemorrhoids, and liver issues. Her patients range in age from 18 to 90-plus and, though she treats both men and women, she sees a higher percentage of female patients. It’s not surprising, then, that many of her patients come via referral from OB-GYNs.

“Gastroenterology is fascinating. It affects people on a quality of life level in a way you wouldn’t necessarily think of.”— Sunana Sohi, MD, Louisville Gastroenterology Associates

“Women see their OB-GYNs very regularly,” Sohi says. “They tend to develop a relationship where they view their OB-GYN as a primary provider. What I’ve noticed and seen is that the OB-GYNs are mindful about when patients are due for screening colonoscopies, what they need for healthcare maintenance, doing rectal exams. That’s often how I end up seeing patients. A patient will be seeing their OB-GYN and mention that they are having some rectal bleeding or some GI issues and I’ll end up seeing the patient that way.”

While factors such as diet and stress can impact both male and female gastrointestinal tracts equally, Sohi says that hormones in the female body can be another contributing factor.

“Women often times in the premenstrual and menstrual periods will notice a change in their bowel,” she says, noting that studies suggest women are also more apt to be affected by irritable bowel syndrome. “Some women end up with more bloating and diarrhea. That’s specifically related to prostaglandin being released around the time of menses. There’s a whole slew of GI issues that can come up during pregnancy, all related to the body changes that are happening during pregnancy – reflux, gall bladder issues. The progesterone can decrease the motility of the GI tract so people will have bloating and constipation. Hemorrhoids can be an issue because of the venous pressure in the pelvis with the baby.”

Treatment of these conditions, for both men and women, begins with diagnostic testing and evaluation to determine the root cause. Probiotics and laxatives are common treatments, but adjustments in diet and lifestyle can often lead to better long-term results. Bloating, in particular, is a common complaint that can result from a variety of sources.

“Bloating is a very vague term that could be related to a lot of different things,” Sohi says. “It can be difficult to figure out what it’s due to or how to treat it without exploring further. Bloating doesn’t necessarily mean air in the intestines. Sometimes it can be retention of fluid as well.”

Sohi says bloating can be the result of a variety of causes, including bacterial overgrowth, gastroparesis, constipation, lactose, gluten, or stress.

“Some patients will come in and say ‘Just give me a pill that I can take every day, and I can feel better,’” Sohi says. “But some people don’t want to take medicine. They want to do things naturally. I try to work with the individual where they are at and what they want and how they want to get themselves feeling better.”

Sohi says some patients find positive results from yoga and meditation, which help them reduce their stress levels. There seems to be a different solution for everyone.

“One of the things I like about GI is that there is a cerebral aspect to it and there is a lot of long-term patient care,” Sohi says. “I probably spend an equivalent amount of time in the office as I do performing procedures and screenings. Even though it’s a subspecialty, there is quite a bit of internal medicine being practiced in gastroenterology.”

It’s a subspecialty that Sohi clearly loves. It allows her to develop lasting relationships with her patients, exercises her mind and her hands, and enables her to help people every day. Even when her head told her to become a psychiatrist, when it came time to make her career decision, she made the wise choice. She followed her gut.