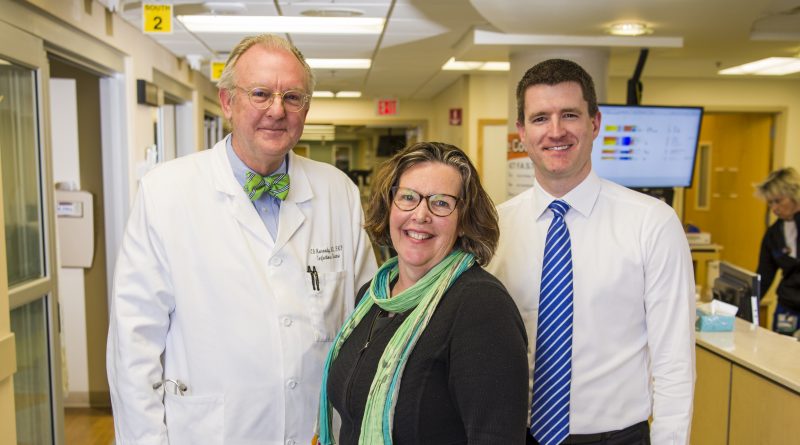 LEXINGTON About ten years ago, Charles A. Kennedy, MD, hospital epidemiologist at Saint Joseph Hospital, queried, “If we can take a patient presenting in the emergency room with acute myocardial infarction to an EKG within ten minutes; from the ER door to cath lab and a stent within an hour; or critically evaluate an acute hemispheric stroke, begin transfusions, pharmaceuticals, and medical interventions within 30 to 60 minutes, why can’t we get blood cultures and rapid administration of antibiotics in a septic shock patient with a similar reaction time response?”

The answer now at Saint Joseph Hospital in Lexington is: “They can, and they do.”

In addition to his role as the hospital epidemiologist at Saint Joseph Hospital, part of CHI Saint Joseph Health, Kennedy also chairs the Infection Prevention and Control Committee and Antimicrobial Stewardship Program. Originally from Southern California, near Los Angeles, Kennedy graduated from the California Institute of Technology, received his medical degree at the University of Southern California, and completed his residency in internal medicine at the University of Washington School of Medicine followed by a fellowship in infectious disease at the Keck School of Medicine at USC.

Kennedy is also a partner in private practice with Lexington Infectious Disease Consultants.

On February 12, 2019, Saint Joseph Hospital received The Joint Commission’s Sepsis Certification award. Saint Joseph Hospital is the first, and at this point, the only hospital in Kentucky to receive the sepsis certification. Kennedy says it’s the result of years of planning, putting together a multi-disciplinary team, and developing the protocol known within the hospital as “Code Sepsis.”

Over the years Saint Joseph Hospital was seeing 60–80 patients per month with severe sepsis or septic shock. That was the driver, says Kennedy. “There are a number of clinical parameters to systemic inflammatory response syndrome (SIRS), including fever, low blood pressure, tachycardia, and a suspected site of infection,” says Kennedy. “Now when a patient is admitted into our emergency room, and presents with these symptoms, we institute Code Sepsis.”

The protocol, according to Kennedy, includes drawing blood cultures immediately, administering intravenous fluids for volume resuscitation, and determining a lactic acid level, which is an effective marker for inadequate tissue profusion. Antibiotics are instituted, and the patient is rapidly transitioned to the intensive care unit. “By adopting Code Sepsis, we have driven patient mortality rate down from 18 percent to 6 percent.”

Saint Joseph Hospital is a tertiary care emergency facility, which means many of its patients come from prolonged stays at other institutions, with ventilators, catheters, feeding tubes and surgical incisions. This can “create a perfect storm for bug-to-drug mismatch,” including multi-drug resistant organisms (MDROs), says Kennedy. “When we identify an MDRO, we have real time communication between our antimicrobial lab and the bedside staff to ensure that the patient’s therapy is optimized.”

“It’s been a joint effort between infection control, antimicrobial stewardship, myself as the hospital epidemiologist, and the physicians and staff in the emergency department and critical care unit,” says Kennedy. He attributes the success of the program to the “bright people who are motivated to make a difference in patient care and are empowered to do the right thing, based on peer-reviewed literature.”

“It doesn’t happen in a vacuum,” says Kennedy.

In 2009 Russ Judd, PharmD, came to Saint Joseph Hospital to start the Antimicrobial Stewardship Program (ASP). Judd, from Green County, Kentucky, was a UK undergraduate who received his doctorate at UK’s College of Pharmacy. During his rotation through UK’s Bluegrass Care Clinic, then an HIV clinic, he developed his interest in infectious disease. The opportunity to create a community-based program at Saint Joseph Hospital was an opportunity he couldn’t pass up.

As the clinical pharmacy specialist and coordinator of the ASP, his “focus was to improve antibiotic prescribing practices and reduce antimicrobial resistance while improving patient outcomes.” Quite an ambitious goal, but one that you might say he achieved in January 2018 when the Infectious Disease Society of America (IDSA), named the Saint Joseph ASP a “Center of Excellence.” Judd says at the time it was the first hospital program in Kentucky to receive the honor and one of only 25 in the entire United States.

In addition to the Center of Excellence honor, Judd points to the Rapid Molecular Diagnostic (RMD) program, which was launched in January 2015 as another accomplishment of the ASP. “We are now detecting bacterial and viral DNA from various sources of infections within 18 hours, so we can quickly identify the organism and expedite appropriate therapy. Prior to the RMD program it could take up to 72 hours.”

Like Kennedy, Judd says the Code Sepsis protocol was developed because “historically, sepsis was not considered a medical emergency.” To improve treatment of severe sepsis and septic shock, Judd says Saint Joseph Hospital staff took a two-pronged approach. First, they developed the protocols that led to early detection and rapid antimicrobial treatment, and secondly, they determined the efficacy of the protocols by monthly review by the committee of each case.

“We developed the sepsis policy and Code Sepsis right here at Saint Joseph. It was a very collaborative effort, getting real time feedback on patient outcomes. The Joint Commission Sepsis Certification demonstrates that we are focused on quality and safety. We have developed a process that is comprehensive and evidence-based and provides consistent, high-quality patient care,” says Judd.

Dana Stephens, BS, MT, CIC, FAPIC, graduated from Centre College in Danville, Kentucky, and took laboratory training at UK. She’s been with Saint Joseph Hospital for more than 15 years and says her role is to “ensure the health of the patients and the staff serving those patients.” She is a member of the ASP and the Infection Prevention and Control and Sepsis Committees with Kennedy and Judd. Her responsibility for infection control is “from the rooftop to the basement and everything in between,” she says with a smile.

“I work with everyone in the hospital, from EMS and surgeons to physicians, nurses, and operations.” Infection control encompasses obvious tasks such as hygiene and hand-washing to early detection of possible infection and isolation of patients with communicable diseases. It is her belief that individuals have “the power to improve their health by keeping their immune system in good shape with exercise, a healthy diet, basic good hygiene, and early detection of possible sites of infection.”

She points to the decrease in complications from infection in patients who enter Saint Joseph Hospital as evidence that Code Sepsis is working along with additional protocols. “We aim for a response of appropriate antibiotic administration within 60 minutes or less after the staff member treating the patient calls Code Sepsis,’’ says Stephens. “It’s that rapid response that ensures our patients are receiving the highest quality of care.”

“More sepsis patients are surviving to discharge now because of this program. We plan to extend this program to other hospitals of CHI Saint Joseph Health,” says Dan Goulson, MD, CMO