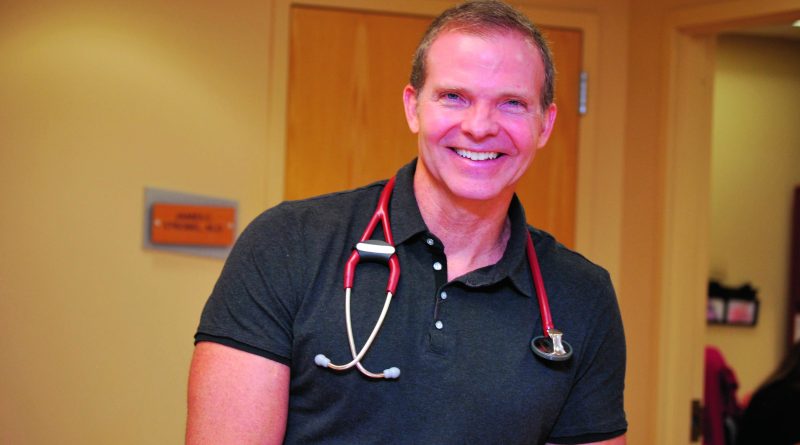 NEW ALBANY The adult diaper industry is a $600 million industry in the United States. That’s one of the facts that Jim Strobel, MD, gastroenterologist at Gastroenterology Health Partners, shared during our interview. We always learn something new in these interviews, but this was eye-opening because it was relevant to a somewhat secret health issue many patients face – fecal incontinence.

Strobel brought up the adult diaper industry as an indicator of just how much more common this condition is than most people realize. If people knew how common it really was, maybe it wouldn’t be so embarrassing. Maybe patients would talk to their doctors about it more. Maybe they would realize there is a way to treat it.

“It’s a common conception that patients with fecal incontinence feel like it’s something they have to live with, but we have very effective treatments available,” Strobel says, noting that the condition is most prevalent in older women in their 60s who have had children. “These women can have damage to nerves and muscles in the pelvis. When they are younger, they are able to compensate, but as they get older, they start having problems with leakage or soiling or just frank incontinence where they are passing stool in their underwear.”

Understandably, this can be humiliating and drastically impact a person’s life. They might choose to stay home rather than enjoy friends, family or other activities. That’s why Strobel gets so much satisfaction out of being able to help treat this problem.

“We coordinate with a urologist and use a device called InterStim,” Strobel says. “It’s like a pacemaker for the pelvis where they can stimulate muscles and nerves to work better and help relieve symptoms of fecal incontinence.”

One of the biggest hurdles to treatment is actually finding out that the patient has the condition. Strobel notes that a very small percentage of patients are even willing to mention it to their doctor. As part of their screening process, Gastroenterology Health Partners now asks every single patient if they are having bowel control issues. Most referrals for fecal incontinence come from the patient’s gynecologist, so Strobel has met with local gynecologists to make them aware of the treatment available to help their patients.

Strobel, who is one of 33 gastroenterologists and advanced practice providers at Gastroenterology Health Partners, sees many other patients as well. He treats upper gastrointestinal issues such as acid reflux and peptic ulcers, and lower gastrointestinal conditions including constipation, diarrhea, irritable bowel syndrome, and Crohn’s disease. He also treats liver and pancreas disorders.

Coming Home to Indiana; Treating Hepatitis A, B & C

Treating a diversity of conditions and patients is what attracted Strobel to gastroenterology when he was in medical school. An Indiana native, Strobel attended Indiana University for undergrad, followed by medical school at the IU School of Medicine. He then spent six years at Duke University Medical Center, completing three years of internal medicine training and a three-year gastroenterology fellowship. Then, in 1997, he moved backed to New Albany, Indiana, to join Gastroenterology Health Partners.

There have been many changes during that time, but one very recent one is the growing problem of hepatitis A.

“I’ve seen more cases of hepatitis A this year than I had seen in maybe the previous 20 years combined,” Strobel says. “Hepatitis A is not something we had seen much of in the past, and now we see it almost weekly. In the past hepatitis A was a disease obtained by fecal-oral transmission, meaning you got it from someone who didn’t wash their hands. But now it’s more likely intravenous drug use.”

“You take somebody who is so socially isolated by this problem and fix them, and they are the most satisfied patients you have ever seen.”— Jim Strobel, MD, Gastroenterology Health Partners

Strobel says that most hepatitis A patients present with symptoms such as nausea, vomiting, muscle aches, and diarrhea. Then, within a couple weeks of the initial episode, they enter the icteric phase and turn yellow.

Strobel also frequently treats hepatitis C, which is generally transmitted via blood contact, often as a result of intravenous drug use. Strobel notes that treatments used to take a year, but relatively new oral medications help nearly 99 percent of patients to be completely cured within eight to 12 weeks.

Hepatitis B is seen less frequently. It is generally sexually transmitted. “Ninety percent of the time your body reacts to it, and you become immune,” Strobel says. “But 10 percent of the time it can become chronic and lead to cirrhosis or liver cancer.”

Another cancer Strobel commonly treats is colon cancer. Indiana is considered a colon cancer hotspot, based on national data. As a result, Strobel and his colleagues do their best to educate the community and encourage screening.

“Colon cancer is so preventable,” Strobel says. “If every patient eligible for colon cancer screening got screened, you could reduce colon cancer by 90 percent or more.”

Strobel says one of the reasons that the screenings are so effective is because they involve hollow organs.

“We have a unique screening opportunity,” he says. “We can go in and take out a pre-cancerous polyp. By removing that small polyp, we prevent cancer. We can’t go inside the prostate gland or the breast, so that’s one advantage we have dealing with a hollow organ.”

Strobel adds that most people with gastrointestinal cancers don’t have any symptoms, so patients assume they don’t need to have a colonoscopy because they feel fine.

Strobel is a strong advocate for screenings and identifying patients at risk. He notes the example of esophageal cancer. If patients have had acid reflux for five years or more, especially if they are a middle-aged, white male, they are at significant risk for Barrett’s esophagus, which is a pre-cancerous condition for esophageal cancer.

“So, it’s just a matter of identifying patients at risk who need to be checked,” Strobel says.