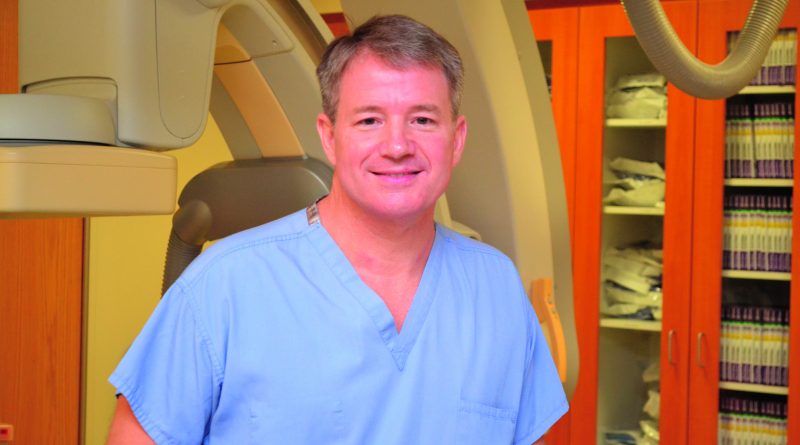 CYNTHIANA, KY Usually it takes a while to determine the success of a new program. There is data to collect, trends to track, and results to analyze. But sometimes, it takes almost no time at all.

Sometimes, it only takes 12 minutes.

That was the case for the new interventional cardiology program launched at Harrison Memorial Hospital in Cynthiana, Kentucky in 2018. Directed by Matthew Shotwell, MD, a board-certified interventional cardiologist, the department was part of a primary angioplasty pilot program designed to treat heart attack patients at rural hospitals rather than transporting them to larger cities.

“Studies show that the faster we treat the heart attack, the better the survival is for the patient,” Shotwell says. “All the data shows that you bring services to the patient, you don’t bring the patient to the services. It was a great opportunity to start treating heart attack patients here at the hospital.”

It was a big step, though. There was a commitment of resources – financial, material, personnel – to establish the program. It could take a while to measure its value.

“One of the very first patients we treated here for a heart attack was a man in his 50s,” Shotwell recalls. “He had sudden cardiac death in the parking lot here. Twelve minutes later, from the time he hit the door, we had his artery open. He had a left main artery blockage. This is a life-ending blockage, even worse than the proverbial widow-maker. We put one stent in him. Ten minutes after that he was on Facebook posting that he just had a heart attack. He went home the next day. If we weren’t offering that service here, he would never have survived from here to Lexington.”

It was instant confirmation to Shotwell that he had made the right decision. Born and raised in Kentucky, Shotwell grew up in Burlington, Kentucky, attended Northern Kentucky University, then the University of Kentucky College of Medicine. That was followed by his residency in internal medicine and a fellowship in cardiology at the University of Cincinnati College of Medicine. He then practiced in Maysville and Ashland before accepting the opportunity in Cynthiana.

The service area for Shotwell’s cardiology department includes 45,000 in the primary market area and 75,000 to 100,000 patients in the secondary market area. Currently, the Harrison Memorial cardiology department serves approximately 300 patients, and the volume has nearly doubled every year since its inception in 2015. As the only interventional cardiologist in the area, Shotwell is in high demand.

It didn’t take him long to realize he needed help, and he knew just who to call. He met B.K. Srivastava, MD, while they were both fellows in Cincinnati. Srivastava, also a cardiologist, was practicing in Dayton when Shotwell contacted him. In 2017, Srivastava moved to Cynthiana.

“Dr. B.K. is a genius,” Shotwell says. “He is brilliant at what he does. He does all the diagnostics, and I do all the mechanical work. We have been a great team.”

“We often found that patients were seeing multiple physicians for vascular problems,” Shotwell says. “I was interested in consolidating all those specialties into one. I took additional training beyond the fellowship program to basically do everything a vascular surgeon does, an interventional radiologist does, and a cardiologist does. So my training was not just the heart, but encompassed all the blood vessels except those in the brain. We wanted to provide a continuity in one treatment facility in order to decrease potential problems from a patient being treated by multiple doctors. That’s why I did that training.”

Shotwell’s curiosity in understanding the full scope of the vascular system came naturally, he says.

“I always liked the mechanics of the heart,” he says. “I like the hydraulics, the pressure dynamics, the electrical. I was just fascinated with it from the very beginning. I’m also a big car enthusiast. Of course, cars are engines and the heart is an engine, so I just naturally gravitated toward that.”

He is also the only physician within the HMH service area who puts in pacemakers, so he receives many referrals from other physicians. He estimates that installing pacemaker and defibrillators makes up about a third of his practice.

“All the data shows you bring services to the patient, you don’t bring the patient to the services.”— Matthew Shotwell, MD, interventional cardiologist at Harrison Memorial Hospital

With such a volume of work, it’s easy to see the impact of the pilot program at Harrison Memorial Hospital. Previously, the cardiology presence at the hospital was largely made up of cardiologists from Lexington who would come in to see patients and frequently transfer them to Lexington.

“That worked years ago, but it’s an incredible disservice to patients,” Shotwell says. “With the evolution of interventional cardiology, these services are now so safe that it only makes sense to bring the services to the patients. The data supports that not only is it good to practice this way, it is the very best way to practice for patients.”

Shotwell credits the local medical community and the hospital leadership with making the program a model of success.

“We have an incredibly supportive medical staff,” he says. “The doctors and the medical community welcomed us and gave us a chance. I can’t say enough about our CEO, Sheila Currans. She’s been the most attentive CEO I’ve ever encountered. She’s got a history in nursing, so she knows what it takes because she’s gone through it. The board and hospital staff have made sure we have the best equipment available anywhere in the world.”

That equipment has resulted in glowing results and capabilities once thought impossible in a rural hospital.

“We have the lowest complication rate and the best outcomes in the entire state of every hospital that does interventional work.” That data confirms the decision to launch the pilot cardiology program was the right one.

So did the first 12 minutes.