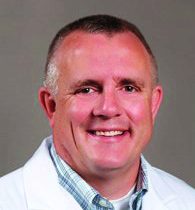 When Kevin Moore was growing up in Elizabethtown, Kentucky, he envisioned one day becoming a doctor. It’s fair to assume he pictured himself performing surgeries, wearing lab coats and stethoscopes, and reading x-rays. It’s also fair to assume he didn’t picture himself providing care to injured soldiers and civilians in a foreign country. He always had the destination in mind, but, as it often does, life chose an unexpected route for him.

“I cannot imagine a time that I did not want to be a doctor,” says Moore, who now practices family medicine at CHI Saint Joseph Medical Group-Primary Care in Bardstown, Kentucky. “It’s something I always wanted to do. It was in high school that I realized it was something I actually could do.”

Following high school, Moore attended Murray State University. Then, he joined the Armed Forces and attended the Uniformed Services University of the Health Sciences in Bethesda, Maryland. “It was the one choice that made the most financial sense for me,” Moore says. “It opened doors for me to go to medical school without having to assume large amounts of debt. I also believed that it would provide me a great medical education.”

Medical students at Uniformed Services University all serve in the Army, Navy, Air Force, or Public Health Service while attending school. After graduating, students are required to complete residency in one of the military training programs and serve in their respective service long enough to pay back their education. Moore chose to serve in the United States Army.

Moore did his residency in family medicine at the Dwight D. Eisenhower Army Medical Center in Fort Gordon, Georgia. He later completed a faculty development fellowship at the University of North Carolina-Chapel Hill. Moore served in the Army for a total of 26 years with 22 of those years as a doctor. Among his many assignments were locations in the National Capital Area, Georgia, and Texas. He also had two separate deployments to Iraq in 2003 and the Egyptian Sinai Peninsula in 2012–2013.

“My favorite assignment was being the residency director for six years for the Army’s Family Medicine Residency at Fort Belvoir, Virginia” Moore says. “I loved that job. I loved the mentoring and teaching of residents plus the need to develop programs and curriculums to adapt to an ever-changing medical landscape.”

While Fort Belvoir was his favorite assignment, other assignments proved to be more challenging, but also extremely rewarding. Moore was battalion surgeon for the 1–30th Mechanized Infantry Battalion in 2003 during the initial ground war into Iraq.

“It was just me, my medics, and about 1,200 to 1,500 soldiers.” Moore says. “We were on the front lines. We were taking care of combat casualties and wounded civilians. We were taking care of sick and injured people. We got to do that during a time of war and well before we had fixed facilities. We did a lot of moving from location to location as the ground war evolved.”

In 2012–2013, Moore deployed to the Sinai Peninsula, only about 30 kilometers outside the Gaza Strip. There, as task force surgeon, he was responsible for all medical operations for the Multinational Force and Observers, a multinational peace-keeping force spread out over two main camps and 31 remote sites throughout the Egyptian Sinai. The multinational force included personnel from 13 countries, including Australia, New Zealand, Columbia, Fiji, Uruguay, Czechoslovakia, Norway, and Hungary.

“I was there in the middle of it, all the time,” Moore says. “That was a great, fascinating assignment. We were monitoring the long-standing Camp David Peace Accords between Israel and Egypt at a time when Egypt was struggling with the effects of Arab Spring, free elections, and the rise of extremists and terrorism in the Sinai. It essentially evolved into a combat assignment without the press coverage; it was one of many conflicts that the Army faced as it dealt with rising terrorism throughout the world. Serving with soldiers from 12 other countries and working with the militaries of both Egypt and Israel was definitely a learning experience.”

Moore left Egypt as a colonel and was assigned to be the chief of family medicine at Brooke Army Medical Center in San Antonio, Texas. There, he was responsible for providing primary care to an enrolled population of more than 60,000 patients at five clinical locations spread across the city of San Antonio, overseeing everything from patient care to supporting services like laboratory, radiology, and pharmacy.

When Moore left the Army in June 2017, his military awards included the Legion of Merit, Bronze Star, and Meritorious Service Medal. He was also inducted into the Order of the Military Medical Merit. Moore definitely credits the Army for exposing him to the world. “Because of the Army, I was able to travel to places and learn about a lot of cultures,” he says. “I’ve been to Korea, Ghana, Italy, Germany, Iraq, Egypt, and the Holy Land. I’ve seen the Western Wall in Jerusalem, the Great Pyramids in Egypt, the Demilitarized Zone in Korea, and so many other things. It really shaped the person I have become.” He also credits the Army for providing him a diverse patient care background beyond that of a traditional primary care provider.

On the Front Lines of Primary Care in Kentucky

In 2017, Moore decided it was time to end his military career. While he expresses his love and appreciation for his military experience, he also missed time with his family. He and his wife wanted to move back to Kentucky to reconnect with family and friends.

Moore also was looking to be part of a smaller practice where he could focus on adult medicine and chronic disease management. He and his wife wanted a smaller town, but one that was close to an airport and larger city. They found the right spot in Bardstown and CHI Saint Joseph Medical-Primary Care.

Today, the bulk of Moore’s patient population ranges in age from 20 to late 90s and includes all genders and economic levels. “My clinical interest has always been adult medicine and complex disease management and taking care of chronic disease,” Moore says, noting that he also handles acute care cases.

Unfortunately, Kentucky offers plenty of chronic healthcare issues for Moore to treat. He points specifically to the prevalence of tobacco-related illnesses.

“Moving back to Kentucky was an eye-opener on tobacco for me,” he says. “Tobacco use had really become ‘taboo’ in our active duty military population, and we had seen declining numbers in our retirees and family members. I was surprised by how many patients smoke and how many people have smoking-related illnesses. It has been a big change here, just realizing how pervasive tobacco use is in Kentucky.”

Among the tobacco-related conditions Moore treats are COPD, chronic emphysema, heart disease, and vascular disease, in addition to screening for lung cancer. “That’s all related to our chronic tobacco use,” he says. “It’s something that Kentucky is still struggling with. We haven’t made some of the inroads that other states have with smoking cessation.”

Coming out of his military experience, Moore is also well aware of the shortage of primary care physicians. He notes that burnout is one of the issues that must be addressed. “In general, primary care has a high degree of burnout,” he says. “We have to make sure that primary care is both attractive for new physicians and sustainable for those already in practice. We have to understand that caregiver fatigue for primary care providers is a real thing and make sure we are not contributing to that fatigue with new rules and policies.”

While Moore is in tune with the challenges facing his profession, he is also proud to be part of it and thankful for his unique journey.

“I loved my time in the Army,” he says. “It gave me a strong clinical base to do what I’m doing now. It gave me a wide variety of experiences – everything from seeing patients in a dusty combat environment out of the back of a 577 armored ambulance, to seeing patients with tuberculosis in Ghana, to seeing patients in a military medical center who are having transplant surgery done. I can’t say anything but great things about the opportunities the Army and how it prepared me for what I’m doing now. I wouldn’t change it for the world.”