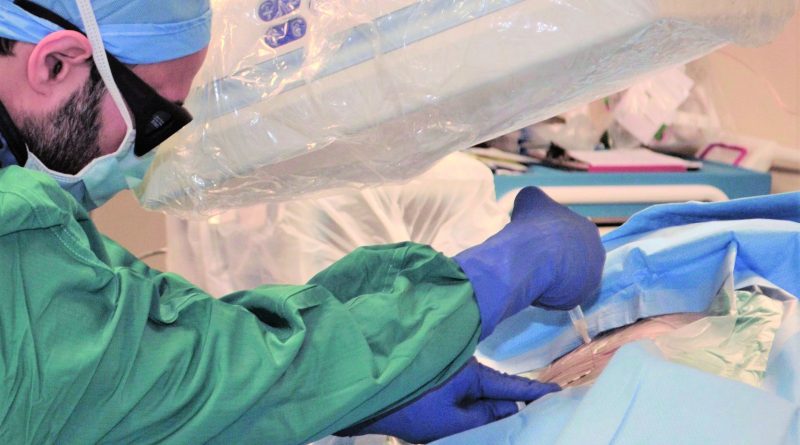 LEXINGTON Experiencing back issues as we age is so prevalent, it’s almost a universal condition. In fact, according to iData Research, there are approximately 1.62 million instrumented spinal procedures performed annually in the United States. Many of these patients suffer from lumbar spinal stenosis (LSS), a condition where the spinal canal has narrowed and compressed the spinal cord nerves in the lower back, causing significant pain with standing upright and walking.

According to Danesh Mazloomdoost, MD, treatment for LSS has typically meant an invasive surgery that “cuts to the bone through delicate muscles that never really re-form. The surgeon chips away at bone and hardened ligament to create space,” he says. “In fact, the surgical approach can compromise the structural integrity so much that future surgery, like a fusion, becomes a real possibility.”

But a new, much less invasive, FDA-cleared alternative is experiencing a resurgence, says Mazloomdoost, an anesthesiologist and medical director of Wellward Regenerative Medicine based in Lexington, Kentucky. Mazloomdoost is fellowship-trained in anesthesiology from Johns Hopkins and pain medicine from MD Anderson. He recently undertook regenerative medicine training with the Academy of American Orthopedic Medicine and Hackett-Hemwall Patterson Foundation.

The procedure, known as Minimally Invasive Lumbar Decompression, or MILD, developed by Vertos Medical, was introduced several years ago and represented such a “revolutionary procedure that it shook the medical community,” says Mazloomdoost. MILD established a new category of minimally invasive treatment between injections and invasive surgery. Due to its novelty and to ensure broad access to patients, Vertos worked to establish national reimbursement coverage, and now Medicare patients 66 and over are covered.

Mazloomdoost says that outcomes with the procedure have shown so much benefit for his patients that he was asked to precept for Vertos Medical and teach other clinicians how to do it.

How exactly does the MILD procedure work? “What it does,” explains Mazloomdoost, “is through a straw and under x-ray, it goes in and shaves that ligament, which is causing the compression on the nerves, without the need for cutting muscle and without the need for opening the spine up. Therefore, you avoid the risk of compromising the structural integrity of the spine by needing to do a fusion. It’s quite a remarkable departure from the typical approach.”

Primarily performed by interventional anesthesiologists, MILD is a highly skilled procedure that requires training, says Mazloomdoost, but patient benefits are many. “It’s an outpatient procedure, done with just local anesthetic,” he adds. “The patient is awake and giving me feedback. Most patients walk out without any difficulty and feel better immediately, returning to daily activities. Some patients with more advanced stenosis may have some pain, but it typically resolves in a few days and they are not kept in the hospital,” says Mazloomdoost.

MILD is Safe and Effective

A recently published MILD study at the Cleveland Clinic showed that 79% of patients followed after one year experienced a significant reduction in pain and increase in mobility. The study concluded that MILD is a safe, effective treatment option that delivers increased mobility and significant pain relief for LSS patients.

Mazloomdoost says another scientific study of MILD with two-year patient follow-ups for the procedure demonstrates that the complication rate is also substantially lower than any other spinal decompression alternative out there.

While attending a recent anesthesiology conference, Mazloomdoost said a subcommittee group met to discuss judicious ways of increasing awareness around the MILD procedure. “How to get this in the hands of the right, skilled physicians, was the focus of the conversation,” he says.

Finding out who’s a good candidate for MILD begins with a clinical diagnosis, and can be confirmed with an MRI and a screening injection visualized under a live x-ray to check if numbing temporarily helps the area. If so, the patient is a good candidate for MILD. “Patients who are contra-indicated would be those on blood thinners we can’t get them off of, or those who have other components to the pain, such as a verifiable nerve pinched or spine instability,” says Mazloomdoost. “Those still need to go to surgery.”

At present, Medicare offers the only insurance coverage for MILD, for those over age 66, because it is such a radically different procedure, says Mazloomdoost. “But the safety data we are getting back on it is so much better than the other alternatives, I wouldn’t be surprised if MILD is widely available in a few years.”

The physician said he gets referrals for MILD from primary care and neurosurgical colleagues but there is a general lack of awareness of the procedure’s availability. “So few know about this option; many more could be referring,” he says. “As a front-line therapy, it’s better because it’s low risk, and it doesn’t eliminate the availability of surgical options later, whereas the reverse is not true. You can’t do surgery and then have MILD at the same spine level.”

Currently, Mazloomdoost does the MILD procedure in a surgery center but foresees the day when it could easily be done in his office, since it’s already an outpatient procedure requiring minimal recovery time.

“To do spine surgery at a fraction of the cost in a safe setting is remarkable,” says the physician. “It’s also perfect from a surgical safety standpoint for high-risk patients because it’s so minimally invasive and general anesthesia is not required. For surgeons concerned about complications as well – with MILD that is exceptionally uncommon in the right hands.”