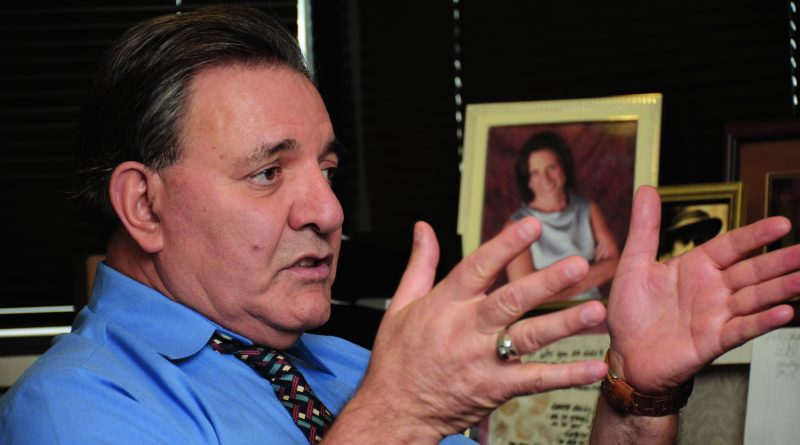 LOUISVILLE Today, he is a board-certified neurologist specializing in the field of neuro-oncology at Baptist Health Louisville. With more than 34 years of experience caring for patients with conditions and diseases of the nervous system, he has also been involved in neurological and neuro-oncological research throughout his career, receiving a number of research grants, and has been cited in more than 40 publications. He is a founding member of the Society for Neuro-Oncology. A world traveler, he has also served in teaching and leadership roles across the United States.

With all his accomplishments, forging his path to a medical career was not an easy journey for Ali Choucair (Shoe-care), MD. Born in Beirut, Lebanon, Choucair says he knew from grade 10 in high school that he wanted to be a brain scientist. “It was the first time I saw a picture of the brain, and I thought it was fascinating, and I knew what I wanted to do.”

A math whiz, he was encouraged by a teacher “not to waste his brain on medicine – to be an engineer or mathematician,” but that was not his dream. He wanted to go to the United States and be a doctor.

His parents could not afford a college education for Choucair, and his father encouraged him to go to Germany to pursue a degree in engineering. He was taken in by a German family but worked in between classes and on weekends to save money to go to America.

The first time he tried to come to America, the interviewer at the US Embassy in Beirut told him that in the USA foreign students do not get into medical school, and he literally crumbled his visa application and denied his entry as a foreign student. It took three trips to the US Embassy and financial help from a neighbor in Lebanon whose son Choucair had tutored before he was granted a visa and allowed to enter the United States. “I was literally trembling when the interviewer says, ‘Welcome to America and good luck,’” says Choucair.

At Rice University in Houston, Choucair was admitted on academic scholarship and was taken under the wing of a professor, who helped him get a teaching assistant job to help pay for his living expenses. Choucair says with the troubles in the country today, “Many people don’t realize the great things in this country, and the great people.”

He graduated from Rice with high honors, but was still unable to get into medical school. He couldn’t afford a private university, and state-sponsored schools could not accept foreign students. But Choucair was not ready to give up on his vision for the future, so he looked for an alternative. He received a scholarship and was accepted to University of Calgary School of Medicine in Canada. He was told he was the first foreign student to be admitted to the school of medicine.

He subsequently completed a neurology residency in Salt Lake City, Utah and a neuro-oncology fellowship at the University of California San Francisco. Choucair says he knew he wanted to be a neurologist, but initially thought he would get his MD and PhD and go back to research. “But when I started interacting with cancer patients, they did something to me,” says Choucair. “I couldn’t believe people could suffer so much, especially in a hospital.”

A chance conversation with a friend over dinner encouraged Choucair to join him at Baptist Health to help lead the new neuro-oncology program. Now, he works with a wide variety of other specialists to help patients with cancer of the brain, spinal cord, or nerves. “Most of the time the cancer to the nervous system comes from outside the brain like the lungs, breast, or gastro-intestinal tract,” says Choucair. “Many patients experience brain complications from chemotherapy and radiation, too.”

Seeing the Future Through the Lens of the Past

With more than three decades as a neurologist, Choucair says the technology in the field has advanced exponentially. “When I went to medical school, first we had the x-ray, then CAT scan, then MRI, then PET scan. Now in cancer we’re talking about looking inside and imaging a single cell.”

Choucair says these advancements have led to sea changes in the treatment of some diseases. “Knowledge in medicine is exploding. Multiple sclerosis (MS) is a good example. If you compare today’s literature on MS to 25 years ago, you would think it was two completely different diseases. Treatment for migraine was very limited, and now we have specialized targeted therapies with antibodies to treat patients. There are still certain areas where we have no effective treatment, such as for Alzheimer’s, but I think we are knocking on the door of a breakthrough,” he says.

Choucair is also optimistic about the future of cancer treatment. “When I went to medical school, if somebody was diagnosed with a grade 3 glioma, they had surgery, radiation, and then they died within 2 or 3 years. Now look at some of these people, 13 years still alive,” says Choucair.

The field of neuro-oncology has burgeoned since Choucair chose that as his little-known specialty years ago. At the first annual meeting of the Society of Neuro-Oncology, 22 years ago, 250 people were attendance. The 2018 meeting held 2,500 people in a hotel banquet hall. Choucair sees the biggest challenge in neurology as money for research. “Research is the future – no question about it. We are also challenged in how to make therapy affordable for the people.”

A Lifetime of Service

For Choucair, his desire to help the underserved is driven by gratitude and was modeled for him early in his childhood in Lebanon. In his ancestral village, there were no medical services, running water, or electricity. His grandfather, a farmer, would routinely collect and dry herbs and tend to the sick when needed, at times leaving his fields unplowed. His harvest would suffer. “He would come home and tell my grandmother that he couldn’t take money from the people whom he helped. ‘God gave me the gift, and he will take it if I take money from these people,’” says Choucair. His grandmother would tell his grandfather that he was a fool.

The doctor recalls his father giving him rolled up slips of paper to leave for the neighbor, with instructions to leave before he was seen. “The neighbor was raising her grandchildren and her husband was a drunk,” Choucair explained. “When I opened one of the slips, I realized it was money and I flew off the handle. We had little money. I told my Dad he was a bad father, and he loved the neighbors more than he loved me. Later he put me on his knee and told me that not everything that God gives us is ours to keep. We have to give something back,” says Choucair. “Years later recollecting these stories about my grandfather and my father, I thought ‘Here is my example.’ My grandmother may have complained that my father and grandfather were fools, but no, they just had hearts of gold.”