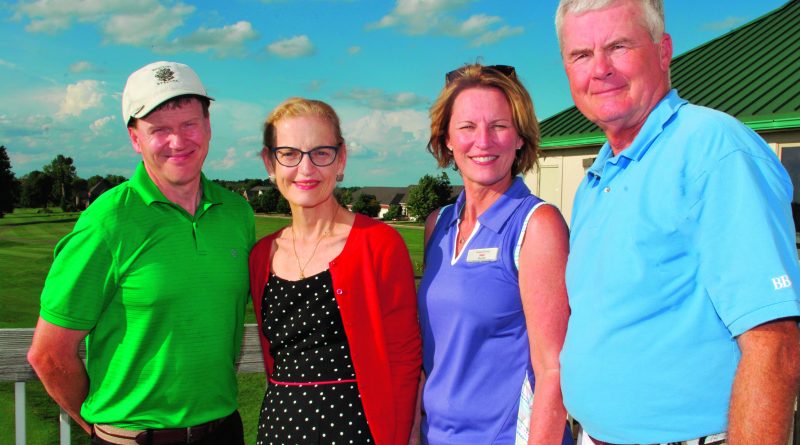 The event raises funds for the Yes, Mamm! program, which provides mammography screening and diagnostics to underinsured patients in 15 counties in the Commonwealth. The Yes Mamm! Program has provided screening for more than 2,000 women since its inception.

PARIS The 29th Annual LMS Foundation Golf Tournament was August 29, 2018 at the Houston Oaks Golf Course in Paris, Kentucky. Physicians and business leaders participated in the “shamble” format to raise money for central Kentucky charities such as Baby Health Services, Bluegrass Council of the Blind, Camp Horsin’ Around, Children’s Advocacy Center, Kidney Alliance of KY, Ronald McDonald House, Surgery on Sunday, and many others.

Hope Scarves Has Sellout Crowd at Annual “Colors of Courage”

LOUISVILLE A packed house of over 500 attendees filled the Mellwood Arts & Entertainment Center on Friday October 5, 2018 for the 7th annual fund-raising event, “Colors of Courage,” put on by Hope Scarves, the Louisville non-profit created by Lara MacGregor in 2007.

MacGregor was diagnosed with breast cancer at 30 years old in 2007. While she was receiving chemo therapy and radiation treatment, she received a box of colorful head scarves from a friend and Hope Scarves was born.

Since its inception, Hope Scarves has distributed over 10,000 scarves to women and girls, ages 5 to 93 in all 50 states and in 16 countries. In addition to providing support and connection for women with cancer, Hope Scarves has raised and donated more than $150,000 for clinical research at the University of Louisville Brown Cancer Center and Slone Kettering Cancer Center in New York.

For information on Hope Scarves, go to www.hopescarves.org.

LEXINGTON The annual Past Presidents’ Dinner of the Lexington Medical Society (LMS) was October 10, 2018 at the Boone Center on the University of Kentucky (UK) campus. Thirteen past presidents were in attendance.

Outgoing LMS president Tuyen Tran, MD, gave a recap of the past year’s efforts and accomplishments of both LMS and the Kentucky Medical Association (KMA). Among Kentucky legislative successes, he noted reimbursement for telehealth is now the same as in-person visits; the tobacco tax was raised from $.60 to $1.10; and peer review protections for physicians and hospitals to “assess their work without the possibility of their opinions being used in medical malpractice claims” is now guaranteed.

Tran noted the success of the KMA and Foundation for a Healthy KY’s “Focus on Flu” campaign, which garnered statewide attention on multiple media platforms, including a statewide “Flu Shot Day” on September 26, 2018.

Tran also encouraged all physicians to participate in their medical society and the KMA. The 2019 “KMA Physicians’ Day at the Capitol” is February 21, 2019.

As part of the LMS’s mentoring program, LMS members were joined by UK medical students at the meeting.