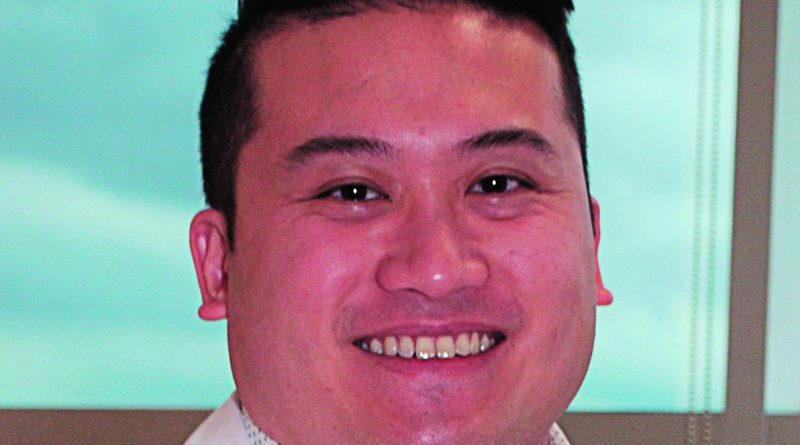 LEXINGTON / MT. STERLING, KY Fifty years ago podiatry may have been chiefly concerned with corns and calluses, but todays podiatrist has moved far beyond its early beginnings to a field that treats multiple complex surgical and non-surgical conditions. Just ask Jan Veloso, DPM, a foot and ankle surgery specialist who joined Anup Chattha, MD, and James Rollins Jr., MD, at KentuckyOne Health Orthopedic Associates in Lexington and Mount Sterling in June of this year.

Originally from a small town outside Chicago, Veloso graduated from the University of Illinois and says he knew he wanted to do something in the medical field. But it was actually his brother, who was completing his emergency medicine residency at the time, who suggested Veloso take a look at podiatry.

“During the shadowing process, I realized I wanted to specialize. From day one, I liked that podiatry focuses on the foot and ankle, but because the foot and ankle are so complex, every patient is still a little different,” says Veloso.

He went to medical school at Rosalind Franklin University of Medicine and Science north of Chicago in 2014 and completed a three-year surgical podiatry residency at Norton Hospital in Louisville where he said he did “surgery all day, every day.”

Podiatry Practice A to Z

Veloso’s scope of practice is the treatment and diagnosis of everything surgical and non-surgical affecting foot or ankle – including skin, tendons, nerves, muscles, joints, and bones. That means Veloso treats a wide variety of conditions and presentations – everything from sports injuries like Achilles tendon ruptures to flat feet to traumas or injuries. Veloso’s average patient is between 30–60 years old with about an equal number of male and female patients. He works with primary care providers through referrals and sometimes needs their help with medical management of the patients. “With the aging population we see a lot of people who need surgery that have comorbidities like diabetes, hypertension, heart disease.”

An examination of a few of Veloso’s recent cases illustrate the diversity: surgery for an ankle fracture; someone who dropped a refrigerator on their foot and sustained soft tissue injury; and a surgery on a metatarsal fracture that happened when the patient stepped down wrong. “With trauma, people think a lot of force is required but sometimes you can just have a wrong slip at the right angle and unfortunately, things break.”

One common condition Veloso sees is flat feet, a condition that causes feet not to move the way they should, putting stress on the tendon holding up the arch. Over time, this repetitive stress causes inflammation, tendonitis, and even tearing and rupture of the tendon.

Veloso said he feels passionately about this condition because patients wait too long to address it. “The condition can start as early as 6 years old, but people try to ignore the pain or live with it,” Veloso says. “But when the condition progresses to late stage, the joints become arthritic and limit the surgical options we have. If its caught in the early stages we have more options to keep patients moving or running pain free.” Veloso says diagnosing early can be tricky because a young child’s foot can have a hefty fat pad, so parents see an appearance of flat-footedness. “But for those who are really affected, something called hyper-mobile, those patients can use early intervention with orthotics and can do really well to prevent progression,” he says.

Diabetic neuropathy, which can cause problems with feet and ankles because patients can’t sense pain the same way, is another common presentation for Veloso’s patients. Because patients can’t feel it, unnoticed cuts can turn into infections or ulcers, and increase risk for wounds or amputation.

Also related to neuropathy is a fairly rare condition Veloso says he is seeing a little more often called Charcot, (pronounced shark-o) which presents a very high risk of amputation. “Charcot presents as a hot, swollen foot, and so initially you might think infection, but in the x-ray, you see bones out of shape and crushed up,” says Veloso.

“When patients can’t feel their feet hitting things,” explains Veloso, “They tend to step harder or stomp. Charcot may also start out as an injury that occurs but is not noticed, so it goes untreated. More movement on the same injury creates micro-traumas that continue to injure bones and joints, ultimately causing disintegration.”

Sports injuries such as ankle sprains and Achilles tendons ruptures are also common in Veloso’s practice. Achilles tendon ruptures are basketball injuries, and can be treated with casting or surgery, depending on age and activity level. Veloso says for younger and more active patients, he leans more towards surgical options.

Veloso says a promising new trend that has emerged in the field of foot and ankle surgery is total ankle replacement, a new option for patients with ankle arthritis. “This is an alternative that patients with knee or hip arthritis have had for many years with good success. What’s exciting is that we’re starting to acknowledge the mechanics and anatomy of the ankle and understanding how complicated the joint is. We’ve fine-tuned what we know. It’s great to have the technology from device companies to have a viable ankle replacement.”

Until now, the gold standard treatment has been ankle fusion — where the ankle joint is removed and the bones are joined together. “By removing the ankle joint and joining bones together you don’t have any pain,” explains Veloso. “But the negative is you also don’t have any motion, so it limits simple tasks like climbing stairs.”

Veloso says a good candidate for the total ankle replacement is a patient 55 to 60 years of age or older who is of normal weight or only slightly overweight, and with a less active lifestyle — not a runner, for example. Ankle replacement devices, which are made from similar material to knee or hip devices, are performing with a good lifespan. “Our studies of these devices are showing high 80s to 90 percent of the devices are functioning well after ten years with some studies showing even longer,” says Veloso.

Technology has certainly helped advance the field of podiatry, according to Veloso, with diagnostic tools such as x-rays, MRIs, CTs, and ultrasound. The innovative CT protocol “Prophecy” has been a particularly helpful tool in total ankle replacement surgery.

“The CT forms a 3-D image from the ankle joint, and from there they are able to fine-tune a template of how to put in the ankle replacement,” says Veloso. “During surgery, we get these pre-formed blocks that only fit one way on the ankle joint and guide us where to make the cut. We still double and triple check to make sure, but it takes away a lot of on-the-fly decision-making the OR table,” he says.

Veloso is new to Lexington and KentuckyOne Orthopedic Associates, but not to Kentucky since he did his residency in Louisville. He says his family had missed the state and were looking to return when he was hired by KentuckyOne. His wife, a clinical psychologist, is currently finishing a post-doctoral fellowship in Dallas but will be joining Veloso in a couple of months, beginning a new position as a staff psychologist at the Lexington Department of Veterans Affairs.

“When we met everyone here at the practice, we got the good Kentucky vibes back again, and this feels like home. I think we’re going to be here a long time.”