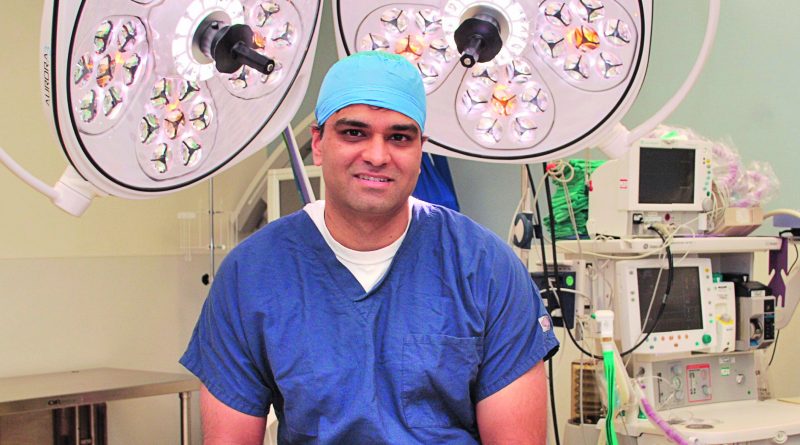 LONDON/RICHMOND, KY It’s important for any physician to be able to communicate expectations to their patients. In some cases, that’s easier than others. Few surgeons can relate to their patients better than Jay Shah, MD, with KentuckyOne Health Orthopedic Associates in London, Kentucky.

Born and raised in Lexington, Shah played soccer while attending Transylvania University, then earned a master’s degree in chemical engineering at the University of Kentucky. Upon graduation, he went to work at the National Institute of Health in a research lab in the Washington D.C. area and continued to play soccer in his spare time until he tore his ACL during a game.

It took four surgeries to repair his knee and to convince him it was time to pursue a different passion.

“Because of my experience with my ACL, I decided to go to medical school,” Shah said. He went to the UK College of Medicine and for his residency as well. Then he completed a sports medicine fellowship at Emory University in Atlanta, Georgia where he had the opportunity to work with professional and NCAA Division I college athletes alongside the medical staff for the Atlanta Falcons and Georgia Tech University’s athletic teams.

He completed his fellowship in July 2015 and joined KentuckyOne Health Orthopedic Associates in August of the same year. With his subspecialty in sports medicine, Shah estimates that sports medicine makes up 65 percent of his practice, with general orthopedics making up the other 35 percent.

Shah sees all ages in his practice, but naturally finds that his sports medicine patients tend to be younger and more apt to need surgery.

“With younger patients, you want to preserve the joint,” Shah says. “As patients get older and develop more arthritis, joint preservation might not work at that point.”

Shah’s patient population has a regional flavor, coming from all over Central and Southern Kentucky, including Monticello, Berea, Hazard, and northeast Tennessee. In addition to his practice in London, Shah holds a clinic in Somerset once a month and recently opened a clinic in Richmond. He notes that most of his sports medicine practice involves arthroscopic treatment of the shoulder, knee and ankle. Along with treatment of fractures in all three areas, typical procedures include ligament reconstructions for unstable ankles, patella stabilization, ACL reconstructions, and multi-ligament knee injuries. Shoulder procedures include treatments of the rotator cuff, labrum, and biceps tendon. Non-surgical treatments include injections and physical therapy.

To Cut or Not to Cut

“There’s a misconception that every joint pain might require a surgery,” Shah says. “A lot of things respond well to therapy and conservative measures. Just because the advanced imaging shows an abnormality doesn’t necessarily mean that’s the cause of their problem.” Shah says he prefers to exhaust non-operative measures before proceeding with surgery. Injections, such as steroids, can help with pain, while exercise and therapy can have more long-term impact.

However, many times surgery is the best solution. That, says Shah, is ultimately up to the patient. “I review what patient goals are,” he says. “There’s no cutoff that says you’re too old; it just depends on your activity level and what you hope to achieve. The only cutoff is if you have arthritis or not. If you have arthritis, an ACL reconstruction or rotator cuff repair isn’t going to help.”

“You’re literally breaking those two bones and then you’re taking the middle third of the tendon and using that to reconstruct the ACL,” Shah says of the patellar tendon approach. “I do all soft tissue quad tendon. I use it in the primary setting for most all of my ACLs. I can get it through a very small incision that is cosmetically appealing, and the outcome has shown to be the same. It’s less pain overall because I’m not taking a bone block. I put patients in rehab the next day and in a brace for two weeks. The therapists I work with tell me that patients recover much more quickly from the quad tendon graft compared to other grafts.”

While he explores non-surgical routes where possible, Shah understands that young athletes are more apt to need surgical repairs in order to return to their desired level of activity. In particular, young female athletes suffer more ACL tears than males do. “It is known that teenage females tend to have more ACL tears than males do, at almost a 3 to 1 level,” Shah says. “It’s related to how females tend to land when they come to a stopped position or are coming down from a jumping position. Their knee internally rotates and becomes more of a knock-knee—or valgus position. There’s increased rotational strain about the knee, and that’s what leads to that ACL tear.”

“I tell patients ‘This isn’t your heart or your lungs. There’s no “have to” about this surgery.’”—Jay Shah, MD, KentuckyOne Orthopedic Associates

While the decision to undergo surgery might be easy for an active teenager or young adult, for others, it’s not always so simple. Shah says that’s why it’s so important to understand the patient’s needs and goals.

“I tell patients ‘This isn’t your heart or your lungs. There’s no “have to” about this surgery,’” Shah says. “My goal is to figure out what they want to do, how it fits in with their life and if I’m capable of doing a surgery that will help them. I will adjust everything based on what the patient’s goals are. It just depends on what you want to get back to and what you want to be able to do.”

They aren’t always easy decisions to make, but at least Shah’s patients know he and his surgically repaired knee can relate.