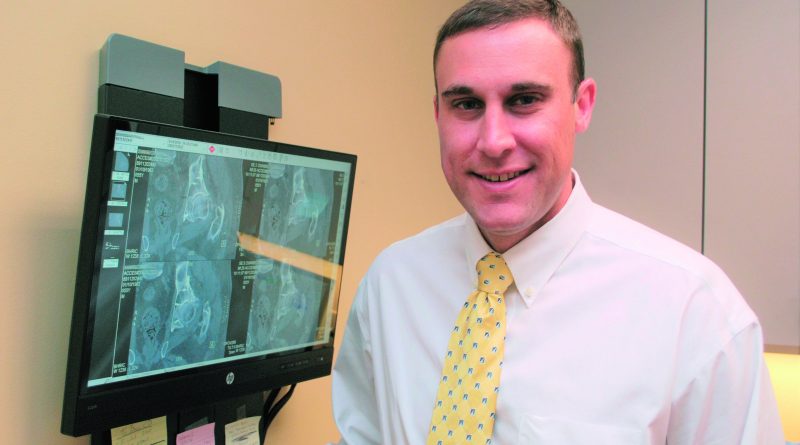 GEORGETOWN, KY David Waespe, MD, visited Switzerland twice in a 12-year span, but the trips could not have been more different. In 2002, he was a hard-playing shortstop on the University of Kentucky baseball team and played summer ball in Europe, including a stop in Switzerland.

By the time he returned in 2014, he had earned a degree in chemical engineering from the University of Kentucky, graduated from the UK College of Medicine and completed his orthopedic residency at the University of Mississippi in Jackson, Mississippi. During his residency, he had a much different opportunity — a prestigious six-week AO Fellowship in Switzerland.

“Jim Hughes, our former chairman at University of Mississippi Medical Center, was one of the first four AO Fellows,” says Waespe, who is now an orthopedic surgeon and partner at Kentucky Orthopedic Associates practicing in Georgetown. “In our fourth year of residency, we all had the opportunity to be an AO Fellow, which is a huge honor. We had the opportunity to spend six weeks at one of the AO sites, and I chose Switzerland.”

The AO Trauma group is a collaboration of orthopedic traumatologists. “AO” is short for Arbeitsgemeinschaft für Osteosynthesefragen or the Association of the Study of Internal Fixation. Orthopedic trauma is a subspecialty within orthopedics that specializes in fixing broken bones and dealing with the trauma that occurs.

“The more complex fractures are where orthopedic trauma really becomes necessary,” Waespe explains. “We all fix broken bones, but fractures of the pelvis and fractures in joints can be very difficult to fix.”

At Kentucky Orthopedic Associates, Waespe practices general orthopedics and specializes in hip and knee replacements, which account for approximately 30 percent of his practice. He treats all ages and sees patients from communities surrounding Georgetown, including Paris, Cynthiana and Carlisle. He also performs sports medicine procedures, including knee scopes for meniscus tears and ACF injuries, shoulder scopes for rotator cuff and labral injuries, and various fractures, as well as hand work, such as carpal tunnel and trigger finger releases. Only a small percentage of his patients end up in the operating room, as many musculoskeletal conditions are treated via physical therapy, injections or medications.

While his cases involving orthopedic trauma represent a lower percentage of his practice, Waespe finds value in his fellowship training every day.

“When you start working with orthopedic specialists who are on the leading edge of research and trying new things, whether it be the development of new plates or rods to fix broken bones, it allows you to see where innovations are going in terms of what would make things easier, what would make it a better fix,” says Waespe. “What they are trying to do is develop surgical techniques that orthopedists who don’t perform these procedures every day can use. Finding techniques that allow it to be simpler for someone who does it once a month is very beneficial.”

“Small differences can make the difference between revising the knee in five years or 25 years.”—David Waespe, MD, Kentucky Orthopedic Associates

Waespe says that most of the recent advancements have come in the design of the plates and screws used in these complex procedures. Progress is being made in terms of making the plates stronger, out of materials the body won’t reject, and with a better fit so they never have to be taken out.

“It’s the mentality of seeing what ‘perfect’ is over and over again and trying to duplicate that,” Waespe says of the application of what he’s learned via his orthopedic trauma training. “The techniques are tried and true. If you follow the right technique, you’ll fix the bone, the bone will heal, and the patient will have a good outcome.”

“Computer navigated knee replacement and repair is all the rage,” Waespe says, explaining that the orthopedic surgeon still does the predominant portion of the surgery, but the computer helps fine-tune the cuts. “Small differences can make the difference between revising the knee in five years or 25 years. The more perfect your cuts are, the less chance you’ll have of failures of a total knee or total hip.”

The technology, trade-named Brainlab, is a computer navigation system that provides immediate feedback, helping guide the cuts and alignment of the implant, allowing the surgeon to make adjustments during the surgery rather than discovering a slight misalignment via a postoperative x-ray.

“It’s very beneficial in giving you real-time feedback,” Waespe says, noting that they hope to have the technology available in Georgetown soon.

“The difference is really in the first week,” says Waespe, who estimates that 75 percent of the total hip replacements he performs are the anterior procedure. “There’s a lot of momentum behind the anterior total hip replacement in the orthopedic community because people get up and walk the next day. That’s one reason why I choose it. The pain being much better certainly helps the recovery process.”

Pain management is an important aspect of any patient interaction, and Kentucky Orthopedic Associates has taken a proactive approach to educating patients and setting expectations. The intended results are for shorter periods of pain management via opioids and better long-term results.

“Coming up with an approach that we discuss with patients on the front end is critical, so they understand why we may only treat them with opioids for a few days or a week after surgery because that is all they will need,” Waespe says. “If they have those expectations they seem to do very well.”

For Waespe, those positive patient outcomes are what it’s all about. After all, an AO Fellow wouldn’t have it any other way.