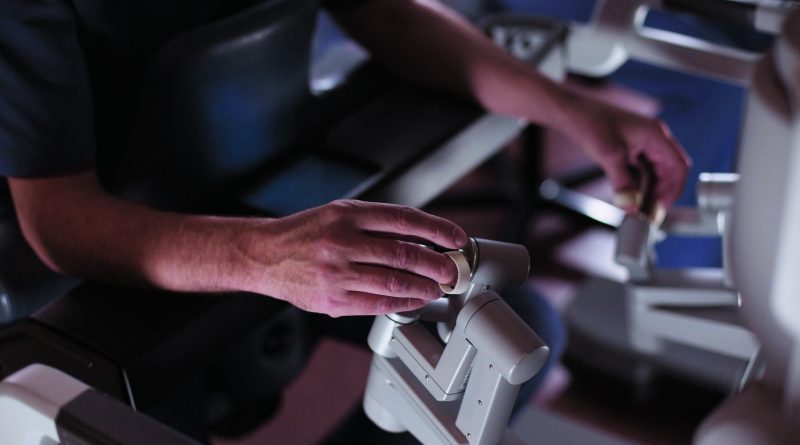 LOUISVILLE Daniel S. Metzinger, MD, associate professor at the U of L School of Medicine, and gynecologic oncologist at University of Louisville Hospital, has performed more than 2,000 successful robotic procedures for gynecologic diseases and conditions using the da Vinci® Robotic Surgery system. The surgeon treats women for cervical cancer, ovarian cancer, and uterine cancer as well as other benign conditions. Metzinger says robotic surgery represents the most innovative approach and provides superlative care for most patients.

“Robotics is a vast improvement over laparoscopic, which was a huge improvement over open surgery. Traditional laparoscopy was an improvement because it was minimally invasive, but it has a lot of limitations to it,” says Metzinger. “It’s like you took scissors or other surgical instruments and extended them to be really long. What happens when you lengthen anything is, it becomes exaggerated, and every human has a tremor. With a camera held by a medical student, it’s just a 2-D visual environment.”

With robotics, Metzinger continues, “We now have a camera with a 3-D field and still have wristed movement without the ergonomics of standing over a patient with arms outstretched for hours, which makes limbs tired, causes injuries and can shorten people’s careers. Consider the superior ergonomics of sitting at a console relaxed with the robot imitating hand movements,” he says.

The da Vinci puts a camera at the site of the cancer or area of the body where the surgeons are operating and gives them the ability to see everything. It provides surgeons with exceptional vision, precision, dexterity, and improved access to the treatment site. The benefits to the patient are smaller incisions, less pain, and faster recovery, which means a shorter hospital stay.

Metzinger, who completed medical school at U of L and a fellowship at the Mayo Clinic, returned to U of L in 2001 to be full-time faculty in the gynecologic oncology program. The doctor is emphatic that the greater medical community does not realize what a revolution robotic surgery represents for the field, and for patient care. “What is occurring at U of L Hospital in our robotics room – the level of surgery, the development of techniques, the development of anesthesia – I don’t feel people are realizing how much we are moving forward in gynecological surgery.”

According to Metzinger, the outcomes speak for themselves. “I have patient after patient with very complex cancer surgeries who are back to work in less than a week and have never taken any pain meds,” he says. “They are out either the same day or the next morning. It’s just unheard of – it’s amazing. I want to get that message out there, but most physicians have a traditional mindset that says, ‘We’ve always done it that way’ They see this machine and they’re scared of the technology of it.”

Metzinger credits his own tech-savvy mindset to his first undergraduate degree in mechanical engineering from the J.B. Speed School of Engineering at U of L. “Engineering is about how we improve things, and that’s how I got into robotic surgery – it’s such an improvement, but it’s hard to drag some physicians along.”

Metzinger said the next realm of exploration on the horizon will be further advanced with robotics. “As soon as you put the computer between physician and patient, you have software capability, so we can improve things through software such as predictive capabilities and injury avoidance,” he says. It’s like a car that alerts you when you are going off the road. There is improved visualization now with Firefly software. We can use a laser system and it can light up vessels or light up the ureter,” says Metzinger.

Physician intractability is not the only barrier to moving the needle on robotic surgery. Like most technology, Metzinger points out the latest and greatest is also costly at the outset and gradually drops in price. “It takes investment and time – something that U of L Hospital has understood from the beginning and has been willing to do. They’ve been very on-board with it and have built a great program here. It’s successful economically because the length of stays are shorter and they see the overall benefit to it. It’s improving outcomes for patients and outcomes for surgeons,” says Metzinger, who performs 600–700 robotic surgeries annually.

Making a difference medically and surgically appealed to Metzinger when he pursued the field of gynecologic oncology. “It’s the only specialty that is surgical and medical; in fact, it was developed for that reason,” explains Metzinger. “When you had a gynecological malignancy in the female pelvis, you have three systems – urinary, gynecological and gastrointestinal tracts, so you ended up with the woman having to go to multiple doctors – a general surgeon, radiation oncologist, urologist, and so on. Gynecologic oncology was developed so one physician could do it all.”

“You also develop closer relationships with patients because it’s long-term,” says Metzinger. “You do their surgery, their chemo, their surveillance, their death and dying, and their palliative care,” he says.

For Metzinger’s patients, the most common presentation is endometrial cancer, a cancer that has spiked because women in the United States are getting larger. The number one contributor is obesity, a fact Metzinger says is not generally well-known, even within the medical community.

“We’re also seeing complications with fertility issues because women are larger at a younger age,” he says. “That used to be rare because women got endometrial cancer in their 40s to 60s, but now we sometimes see it in the 30s or even 20s, says Metzinger. This trend has led to U of L Hospital having an unfortunate sort of subspecialty of operating on obese women. “Even with benign conditions, they are often sent to us because on the hospital side, we had to develop systems with anesthesia and prepping operating tables for very large people and be able to do it minimally invasively,” he says.

Metzinger explains that estrogen production is a key metabolic factor for why obese women of a certain age are at high risk for endometrial cancer. “It’s about excess amounts of estrogen from excess caloric intake,” he says.

“Women produce estrogen in two areas – ovaries and in their fat. When they are large, their estrogen levels are high. If they are in menopause, they don’t ovulate anymore, so they don’t produce progesterone. All that excess estrogen stimulates the endometrium and causes cancers. People don’t know that, or their physicians don’t know that. My biggest refrain over and over is about reducing overall caloric intake. We’re obsessed with what we eat in our culture, but it’s how much we take in that is really affecting the populations I see,” says Metzinger.

Metzinger is passionate that robotic surgery is aiding the treating of his patient population. “When we do exceedingly complex procedures laparoscopically — because it’s a bad tool — we have to compromise our surgery to adjust to the tool. Robotically, we don’t have to compromise the procedure just because we’re doing it minimally invasively,” he says.

“It also means we have significantly changed in a decrease in complications, decrease in side effects, an early return to work, shorter length of stay, and decreased blood loss.”

Training for the Future Generation

Metzinger trains a new generation of U of L Hospital residents – 20 or so – on robotic surgery every year. He sees the current challenge of his specialty as “getting gynecologic surgeons to let go of laparoscopy and not be scared of developing surgical techniques with better tools. The tool is so limited, it’s limiting progress and holding up the field of good surgery for women,” he says.

Metzinger says utilizing this technology to advance the field is the most important priority. “What you see occurring in medicine and happening in medical schools, it’s feel-good stuff and holding hands,” he says. “That’s all good, but the technology we now have could make the care better, and we’re not doing that. That other stuff is important, but it’s not the only thing. You can hold someone’s hand all you want, but they really want you to fix their cancer.”