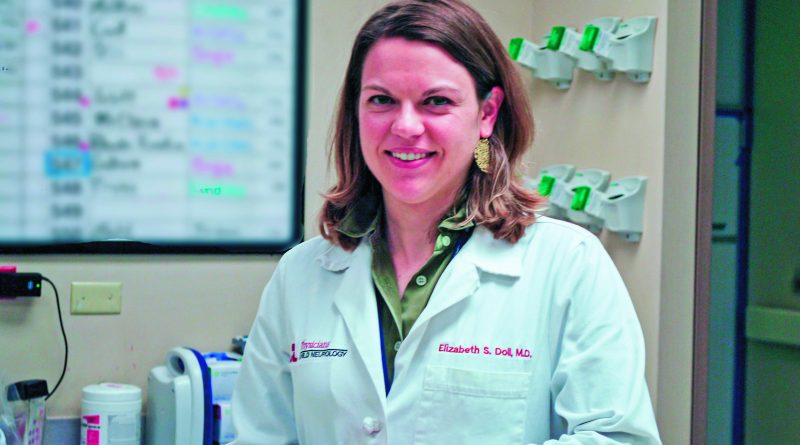 LOUISVILLE When Elizabeth S. Doll, MD, was completing her residency in child neurology in Salt Lake City, Utah two years ago, she became intrigued with acupuncture and its potential as an alternative to medication for treating migraines. She became involved in a research study comparing the efficacy of acupuncture compared to traditional treatment, but she finished her residency before the study was underway, returning to her hometown to practice with Norton Children’s Hospital and University of Louisville Physicians.

“My interest was piqued, however, about acupuncture, and when the opportunity arose to do a training program at Harvard, I applied for it,” says Doll. The acupuncture training involved 300 hours of onsite training and online course work. “The University of Louisville was really supportive and generous allowing me to do the 9-month program,” she says.

That training became the impetus behind an acupuncture clinic for pediatric patients suffering from headaches and other pain-related conditions. Since March 2018, she has been seeing patients at Norton Children’s Pediatric Specialists – Brownsboro, as well as doing inpatient consultations at Norton Children’s Hospital. Mark McDonald, MD, medical director for NCH paved the way for pediatric acupuncture, says Doll. “As I understand it, Norton was one of a few places in the country to use acupuncture in a pediatric hospital setting,” says Doll. Two additional Norton physicians, Danielle Graff, MD, and Olivia Mittel, MD, have also been trained in the method.

The neurologist, who sees more than 1000 patients a year, says she practices general child neurology but has really created a niche for herself in treating headaches. “When I was in training, I discovered that headaches require a multidimensional approach, which can include medication but also addressing the mind-body aspect. I became interested in other modalities to treat headaches,” says Doll. “Acupuncture, when done properly, can be an effective, minimally invasive way to treat headaches and other pain conditions, sometimes without the use of medicines.” She explains how the treatment works.

“Acupuncture involves the placement of small needles in different locations of the body along certain meridians or channels where there is blockage of energy. The purpose is to release those blockages and allow for flow of energy throughout the body.” When treatment time comes, Doll says it can be scary for kids and parents to think about the needles, but she takes time to explain it and demonstrate it. “Once you demystify it, most children do very well and like to come back.”

Doll says there are many enduring misconceptions about acupuncture. “Most people do not feel any pain with the needles. My treatments typically last up to an hour and involve about 10–15 needles in a single treatment. These are usually placed at acupuncture points in distant areas, like the ears and feet,” she says. How do needles there treat headaches? “It’s about opening up pathways throughout the body,” Doll says. “You’d be amazed to see how different body parts are connected. Even with all the advancements in modern medicine, we still can learn a lot from ancient treatments.”

Migraines Can Start Early in Life

Migraines can occur in children as young as four years old, but they are more typical of adolescents. “We see more migraines in teenagers, which is likely a combination of genetics and hormonal changes,” she says. According to the Migraine Research Foundation, 10 percent of all children experience migraines. Statistically, patients with migraines have a 3 to 1 female to male gender ratio.

While genetic and familial predisposition factors in with migraines, the number one trigger is stress, says Doll. “When I talk to patients about lifestyle factors important in managing migraines, we talk about managing stress. You may not think about it, but kids experience stress as much as adults, whether it’s struggling in school or a change in environment.”

The symptoms for migraines in children are the same as adults, namely light and sound sensitivity, throbbing head pain, needing a dark room to sleep it off – these are common across the board. “But it’s more challenging in younger patients to deduce symptoms because they may not have the communication skills to explain it,” says Doll.

Acupuncture has Worked in Trials

Over the years, Western medicine has become more accepting of adopting Eastern practices into mainstream medical care, says Doll. “There have been numerous studies in the last 10–20 years looking at how acupuncture affects our perception and processing of pain especially with functional brain MRIs,” she says. “It’s a different paradigm from Western medicine, but the idea is that if you open up these channels, better energy flows through the body and you are less likely to have headaches on a regular basis. There are still naysayers, but science is catching up to show acupuncture really does help.”

In fact, a study published by the Cochrane Review in June 2016 concluded that a course of acupuncture can be equivalent to, or even superior to, treatment with medications to prevent migraine. (http://www.cochrane.org/CD001218/SYMPT_acupuncture-preventing-migraine-attacks).

Doll says the best outcomes for her acupuncture patients generally occur when treatment is done on at least a monthly basis, but sometimes in an acute setting it can bring immediate relief as well. “I recently had a patient in the hospital and we were treating her with IV medication for her migraine,” Doll says. “After performing acupuncture, she got off meds and went home the next day.”

Doll says she believes that as integrative techniques become more readily accepted, many patients and families expect that doctors have done their own research. “I encourage other health providers to be open minded about different complementary or alternative meds.”

It is important to encourage patients to take ownership for their own health, too, says the doctor, utilizing strategies like biofeedback and acupuncture to help themselves. According to Doll, 50 percent of patients with migraines also suffer from depression and 60 percent from anxiety.

“I still prescribe medications, but taking a more holistic approach for overall quality of life is pretty important,” she says. “The big four for me are sleep, exercise, stress reduction, hydration and diet. I talk to patients every visit about those things. Sometimes, I prescribe fresh air.”

What’s on the horizon for treating migraines? Doll says there are all sorts of new treatments for headaches such as nerve stimulator devices, transcranial magnet stimulators, and Cefaly devices, which are applied to the forehead and use magnetic or electrical stimulation to ease headache pains. “We need to test them more before we draw conclusions, but I think it is something else to offer to patients that is not a medication, without side effects.

To Doll, the picture of the field of neurology itself is changing. “Neurologists used to be seen as just diagnosticians – we saw the patient, diagnosed them and sent them on their way,” she says. “With the advent of genetic testing and new treatments, we are not just diagnosing, but treating diseases. The brain is kind of the last frontier, and we are learning more every day.”