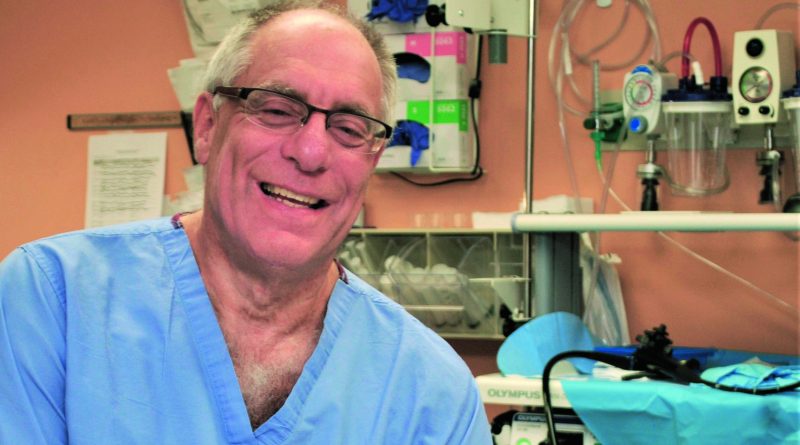 LOUISVILLE Back in the early 1990s, when there was no such thing as colon cancer screening, Martin Mark, MD, was lobbying to make the procedure a part of the preventive care regimen alongside mammograms and pap smears. “Historically, I had the privilege of being involved in that process of going back and forth to Washington, DC with other gastroenterologists to promote colorectal screening,” says Mark. “Based on our knowledge of the pathogenesis of colon cancer, we felt we needed to impact this disease, rather than just treat it. We needed to tell people that we could actually do something to prevent colon cancer.”

An early pioneer in the field, Mark has been involved in gastroenterology for over 30 years. Mark acknowledges that colon cancer screening effectiveness in helping to decrease the incidence of colon cancer wasn’t really recognized until three important papers were published on the topic in 1993—one in the United States and two in Europe. It still took Congress until 2001 to pass legislation to make colonoscopy a primary preventive measure.

Mark, who is board certified in internal medicine, gastroenterology, and hepatology, earned his medical degree in his hometown of Cape Town, South Africa. After moving to the United States in 1984, he completed his residency in internal medicine at the University of Pittsburgh Medical Center and his fellowship at Tufts University in Boston. In 1992, MarkeJHe moved to Louisville. He has been with Norton Gastroenterology Associates of Louisville for the past six years.

Through the course of the years in his chosen specialty, Mark has been witness to many changes. He explains, “This is a field that deals with multiple organs from the esophagus all the way to the colon, and I have seen revolutions in terms of endoscopy, thinking about the disease, radiology, management, and medication. It’s dramatically changed— that’s the beauty of it; it’s why I like it.”

But a new study released in 2017 has been very disconcerting for the veteran gastroenterologist. “In thirty years of doing this, I have not been shocked very many times, but this was one.”

Mark is referring to statistics from an article published in the Journal of the National Cancer Institute,which bore both good news and bad news. The good news was that, as gastroenterologists had predicted, colonoscopy does help prevent cancer. The American Cancer Society study, which tracked the incidence of colorectal cancer from 1974 to 2013, found that the disease has significantly decreased in the United States. The bad news, according to Mark, was that in the age group 20–49, colorectal cancer has risen sharply.

In fact, the study revealed that someone born in 1990 has twice the risk of developing colon cancer as someone born in 1950. That same someone has four times the risk of developing early rectal cancer. “This is very scary because the colon cancer screening recommendation begins at age fifty for someone of average risk,” explains Mark. “What’s even more disconcerting is that these young people are coming in with advanced stage cancers.” The five-year survival rate of an early stage colon cancer patient is 95%, but if the cancer progresses to the lymph nodes, that drops to 55%. If it reaches the liver or lungs, there is only a 10% survival rate.

Mark believes that it is critical to have a change in the primary care physician evaluation for younger patients who come in with symptoms such as a change in bowel habits or rectal bleeding. “Our response has been to be conservative,” says Mark. “We say, ‘We don’t need to do much. Maybe it’s hemorrhoids or irritable bowel. Don’t worry, we’ll treat you symptomatically.’”

But Mark believes if patients are presenting in their 20s, 30s, or 40s with these kind of symptoms, physicians need to be more aggressive than ever before. “It’s very important. If we find it late, it doesn’t help us. We like to find polyps and remove them before cancer or at stage one, because we can cure those people ninety-five percent of the time.”

For Mark, the study represents a quandary. “What do we do with this uptick in rectal and colon cancer for this younger group? We don’t know why. It doesn’t make sense.” Mark notes the usual suspects of obesity and poor American diets do play a role.

“Obesity is a risk factor not just for colon cancer, but multiple other cancers. Americans are more sedentary than ever and eating poorly with too much processed food and red meat, and they are still smoking,” states Mark. Still, he believes this alone isn’t an adequate explanation for the study’s results, and adds, “This has become a major research interest in colon cancer screening.”

“If we find it late, it doesn’t help us. We like to find polyps and remove them before cancer or at stage one, because we can cure those people ninety-five percent of the time.”— Martin Mark, MD

The biggest obstacles in his specialty, with patients of any age, is to get people to make the necessary lifestyle changes, including losing weight, cleaning up their diets, and stopping smoking. “These are easy to talk about or write about, but very difficult to get people to do.” He goes on to say, “The other problem, of course, is getting people to have their colonoscopy.”

To make it as easy as possible for patients to do that, Norton Healthcare offers on-demand colonoscopies. “Patients can sign up through the ‘MyNortonChart’ patient portal and don’t have to visit a physician first,” explains Mark. “The PCP simply contacts us and we can schedule it for them. It’s all about simplifying the process.”

Keeping the focus on patients has been the hallmark of Mark’s long career as a gastroenterologist. “It is gratifying knowing I am making a difference. When a polyp you have removed comes back with precancerous cells, you know you have prevented colon cancer. It’s worth coming to work to do that. That’s a good day.”