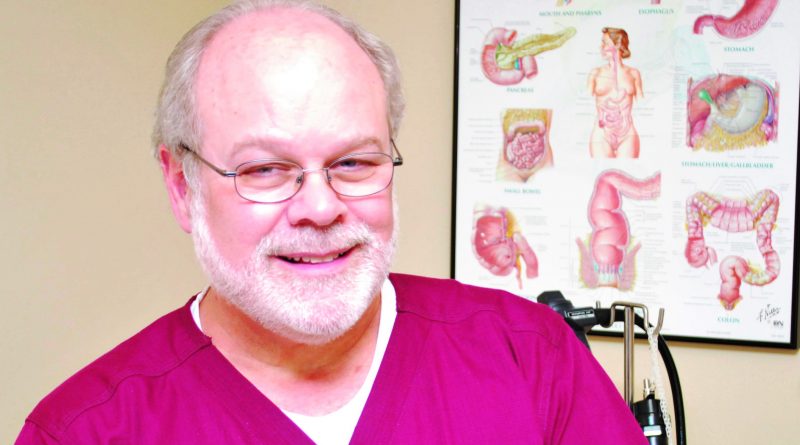 LOUISVILLE & NEW ALBANY, IN As Steven Harrell, MD, says, “Gastroenterologists deal with everything from the esophagus to the anus and all the things in between that connect.”

Gastroenterology involves a number of organs throughout the body which, when working properly, work in harmony to perform a number of vital functions. When healthy, it’s a highly efficient system, different parts all interconnected and working together.

“We saw a trend throughout the country that would enable us to provide a higher quality of patient care at a lower cost by merging,” says Paul Brown, MD, president of Gastroenterology Health Partners. “The merger allowed us to provide more thorough care to the patients. We could do things that we weren’t able to do as a smaller group. We could offer diagnostic procedures such as capsule endoscopy, esophageal motility, anorectal motility, infusion of drugs that we use for inflammatory bowel disease, and stool analysis. From the business standpoint, the merger helped us by working off of economies of scale and decreasing some of our overhead.”

According to Brown, who is from Louisville and attended the University of Louisville School of Medicine, the merger resulted in centralized billing, human resources, and credentialing. It also provided larger data, helping track outcomes from patients of the group’s 25 physicians. The group’s patient base ranges in age from 18 to 100 and is evenly split between male and female.

One of the primary focuses right now is on screening colonoscopy, with a goal to have 80% of individuals over the age of 50 screened by the end of 2018. But Brown is quick to point out that there is much more to gastroenterology than scopes.

“Gastroenterology is a neat combination of procedure-oriented work, as well as office-oriented work,” says Brown. “Fifty to sixty percent of my time is in the office with forty to fifty percent being in an endoscopy unit or center.”

Brown says that one of the most difficult presentations his group treats is inflammatory bowel disease, including ulcerative colitis and Crohn’s disease. New therapies and biologic agents that impact the immune system in recent years have helped significantly in treating these conditions. “These agents work on the immune system to decrease the inflammatory response of the body towards the bowel, which is the underlying pathology associated with inflammatory bowel disease,” explains Brown. “They have been life-changing medications.”

Another life-changing development in the world of gastroenterology has been the advancements in the treatment of hepatitis C. Brown, who calls some of the previous regimens “fairly toxic with significant side effects,” notes that the new oral medications have very few side effects and have a success rate percentage in the upper 90s.

“This is a huge change in hepatology because hepatitis C is the number one cause of liver transplants,” says Brown, adding that “a significant problem with these new treatments is the burdensome cost, which can range anywhere from $60,000 to $80,000.”

“The region is lucky to have a group of highly dedicated and trained gastroenterologists.”— Steven Harrell, MD, Gastroenterology Health Partners

While hepatitis C treatment is expensive and tough to digest, trouble swallowing is another patient issue in which the group specializes. Gastrointestinal motility disorders are common issues that can range from trouble swallowing food to severe heartburn to being unable to control bowel functions. Harrell has made GI Motility a particular focus in his practice.

Initially, endoscopic examination is performed, but if that fails to reveal the cause, the next step is often to perform a manometry test to check the pressures of either the esophagus or anorectal area.

“Somebody that has occasional heartburn from three bowls of chili, we don’t get too concerned with,” says Harrell. “If you see a middle-aged man with frequent heartburn, then you start worrying that he could have pre-cancerous conditions such as Barrett’s esophagus, maybe a large hiatal hernia or other underlying problems. If anyone has trouble swallowing, it’s important to make sure there’s not an underlying issue such as a malignancy. More commonly, it might be a stricture in the esophagus typically from acid reflux.”

One of the more serious motility disorders Harrell sees is achalasia, when the esophageal muscle is always contracted and doesn’t relax, making it difficult for food to pass into the stomach.

“It’s an imbalance of some of the hormones where the muscle is always contracted and doesn’t relax,” says Harrell, noting that he’s seen people with the condition lose up to 100 pounds. “That condition we can treat with Botox or surgery.”

Harrell, who also attended the University of Louisville School of Medicine and completed his fellowship there as well, says that Gastroenterology Health Partners take pride in being part of clinical studies that are helping to find even more cures and treatments for a variety of gastrointestinal disorders.

The group launched a research arm about three years ago and has gone from being involved in zero studies at that time to eight clinical studies currently. The group partners with pharmaceutical companies to perform phase 3 clinical trials.

“We are excited because patients have been very happy to be a part of studies for gastroenterology problems where there is no treatment,” says Harrell. Among the current trials is one for eosinophilic esophagitis, which is an allergic condition of the esophagus typically in younger people that causes trouble swallowing. Another is for non-alcoholic steatohepatitis (NASH), which can lead to cirrhosis. Currently there’s no treatment other than diet and exercise, but there have been some positive advancements in medications for this,” states Harrell.

Gastroenterology has seen notable advancements in therapeutic endoscopy. These procedures help with draining certain parts of the gastrointestinal tract as well as diagnosing cancers. One of the first endoscopic procedures was endoscopic retrograde cholangiopancreatography (ERCP) which helps to evaluate and provide therapeutic drainage of the liver and pancreas. Endoscopic ultrasound followed, beginning in the early 1990s.

“Those two procedures require more education, more experience and specialized training,” says William “Ben” Evans, MD, of the Gastroenterology Health Partners. “Different universities around the country offer a fourth-year paid fellowship position. That’s what I ended up doing at the University of Florida in 2005.”

Evans spent a year on faculty at Florida, teaching other GI fellows about basic endoscopy while he learned the more complex ERCP and endoscopic ultrasound procedures.

“Therapeutic endoscopies are highly complex, technically difficult endoscopic procedures that have benefits to the patient for diagnosis and treatment of certain GI diseases that are less invasive than surgical or invasive radiographic procedures,” says Evans.

Evans says that the most common therapeutic endoscopy patients are those who have pre-cancerous lesions, have early gastrointestinal-related cancers, or have diseases of the liver or pancreas.

“I can’t do everything for every patient, but I can help save the patient from surgery in certain situations,” says Evans.

“When I do ERCP, I practice all the standard of care techniques to help prevent pancreatitis because that’s the one complication we all want to avoid,” says Evans, adding that a temporary plastic stent put in during the procedure can help decrease the incidence of pancreatitis. “The most effective method to prevent pancreatitis and complications with ERCP is with patient selection. If you pick the right patient to do an ERCP on, then it definitely weighs in favor of benefiting the patient, and it’s worth the risk of undergoing the procedure. Sometimes people may do ERCP for a mild indication, and that’s a disconnect in the risk benefit ratio.”

Any sort of disconnect is an issue in the world of gastroenterology. Instead, it’s the connection of three gastroenterology clinics to form Gastroenterology Health Partners that has maximized their strengths, capacity, and ability to be at the forefront of patient care.