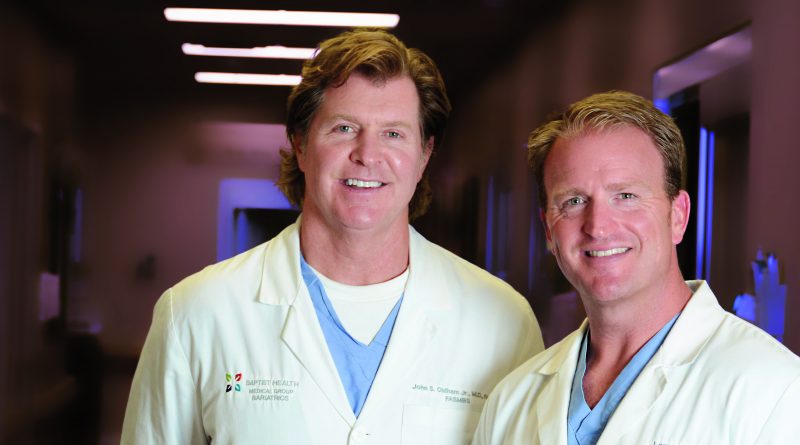 LOUISVILLE & NEW ALBANY, IN As a state, Kentucky holds the unfortunate title of being one of the fattest of the United States, with Indiana close behind. Since the US leads the world in obesity rates, that marks Kentuckiana as one of the most overweight places on the whole planet. John Oldham, MD, and Lanny Gore, MD, are two physicians hoping to change that dubious title.

On the Louisville side of the river, Oldham, a native of Owensboro, is a board-certified general surgeon and Certified Center of Excellence bariatric surgeon. He chose to focus his practice exclusively in the growing field of bariatrics in 2003 when he opened Bluegrass Bariatrics in Lexington with his former partner, Derek Weiss, MD. Together they performed more than 6,000 laparoscopic bariatric surgeries before Oldham signed on with Baptist Health Louisville in 2013.

Board certified in general surgery, Gore completed his residency at the University of Louisville. During his decade at Baptist Health Floyd, Gore performed a wide range of minimally invasive laparoscopic procedures and a variety of abdominal surgeries. More recently, his primary focus has shifted to bariatric surgery for weight loss.

Oldham said the epidemic of obesity is a huge concern for our country. “Obesity is causing people to die 15 years earlier than a normal weight person. Even a Body Mass Index (BMI) of 30, which is only about 30 pounds overweight, causes patients to have a fifty percent increased chance of dying prematurely,” says Oldham. He goes on to point out that the weight itself is, of course, not the biggest concern; it’s what the excess weight causes to happen.

“Obesity affects the whole body, from migraines down to gout in your feet. And, in the middle — heart disease, liver disease, hypertension, diabetes, sleep apnea, arthritis, and you also have a greater risk for cancer,” explains Oldham. These co-morbidities just happen to comprise a laundry list of some of the biggest health issues facing our nation.

According to Oldham, “Weight loss is definitely what most patients are looking for, but it’s more than that. Many people want the bariatric surgery for quality of life reasons: to be able to get off medications for diabetes or blood pressure or arthritis or be able to get off their CPAP machine they use for sleep apnea.”

He goes on to point out that the term bariatric is a bit of a misnomer. “We really should be called metabolic surgeons, not bariatric surgeons, because ultimately, we are working to prevent, improve, or resolve metabolic diseases such as diabetes, high blood pressure, liver disease, and heart disease.” These are all co-morbidities frequently associated with obesity.

The most common weight loss procedure performed in the United States today is the sleeve gastrectomy also referred to as the gastric sleeve. The average weight loss with these procedures is 60% to 80% of excess body weight, but that varies by patient. “Surgery is not meant to get you down to an ideal body weight,” says Oldham. “It’s meant to get you down to a healthy weight. We don’t know what that means for each patient, but if somebody loses fifty percent of excess body weight, but is off their diabetes or hypertension medication, is that success? Absolutely that’s success.”

The gastric sleeve procedure takes about 85% of the stomach out, and that changes how hormones signal to the brain to help you lose weight. “We all have a set point where our weight wants to be, and when we lose weight, our body see that as abnormal. It wants to do whatever it can to drive that weight back up to that set point,” states Oldham. “What the surgeries do is lower that set point to a new weight.”

Oldham explains this why most diets fail. “We are fighting hormones that continue to tell us we’re hungry after eating a small meal. It’s our body defending that set point, and eventually we give up and gain the weight back, often with even more weight.”

Gore adds that a popular misconception about obesity is that it’s about a lack of willpower. “People don’t understand why someone would go through the risk of having surgery when they could just lose weight through diet and exercise.” And, while theoretically that is true, there are a complex set of cultural, environmental, and health factors that thwart even a sincere effort to lose weight.

Gore elaborates, “A patient may have numerous health issues that prevent them from exercising or have issues with food addiction. With an ingrained lifestyle and culture around food, their bodies and minds are so used to a certain way of eating that it’s very difficult for them to do what’s necessary.” Time may also be a factor. “For patients facing severe medical problems, they need to lose weight in a timely manner.”

It’s also about who we are culturally as a country. Oldham adds, “Every holiday, every celebration, every wedding revolves around food. Every emotion — happy, sad, glad, mad. Every evening television commercial features unhealthy food. We try to use every tool we can to fight obesity because we are being bombarded every day with all this bad stuff around us.”

People who have watched the television show “My 600-Pound Life” may have the notion that bariatric surgery is only for that level of obesity. However, the recommended criteria are a BMI of 35 or above with a co-morbidity such as high blood pressure or diabetes, or 40 and above without a complicating factor. Oldham points out that a BMI of 35 is only about 70 pounds overweight. “We are seeing a trend of patients with lower BMIs, and they realize they do qualify and it can help them.”

“People don’t understand why someone would go through the risk of having surgery when they could just lose weight through diet and exercise.”— Larry Gore, MD

“From the start we explain there’s no magic procedure; what we will give them are tools. Lifelong follow up and continuous monitoring is key.”— John Oldham, MD

A Holistic Program of Lifestyle Change

While weight loss surgery can be life-changing for many obese patients, Gore emphasizes that the Baptist Health bariatric program is not just an operation; it’s a holistic program of education and support both pre- and post-surgery. “The patient undergoes a three-to six-month period of supervised weight loss and education on proper and healthy habits for exercise and diet as well as a psychiatric evaluation,” states Gore.

Oldham adds that patients learn upfront that surgery is no panacea. “From the start we explain there’s no magic procedure; what we will give them are tools. Lifelong follow up and continuous monitoring is key.”

Gore and Oldham concurred that patients who experience the best results are those who learn — and maintain — behavioral changes such as habits of “clean” eating. “That means lean protein, vegetables, and fruit coming from the ground and the vine,” says Oldham. “That’s the medicine that can actually heal us.”

Bariatric surgery is growing. According to the American Society for Metabolic and Bariatric Surgery, 196,000 procedures were performed in 2015, up from 158,000 in 2011. “It’s only going to grow as a medical specialty,” says Gore. “It’s become much safer and less invasive, and patients tolerate it well. Other medical specialties are also becoming more accepting, like nephrology. They are seeing that significant weight loss can stop progression of kidney disease.” In orthopedics, too, excess weight can hamper the efficacy of replacing a knee or hip, so weight loss surgery may be done first.

Oldham performed over 500 bariatric surgeries in 2017, and was the first bariatric surgeon in the state to perform a robotic sleeve gastrectomy. He doesn’t have defined goals, but said he is satisfied when he can get a patient to a healthy weight and lessen or solve co-morbidities. “This is all I do. I don’t do other types of surgery. To see patients be able to take the stairs instead of the elevator or be able to play with their kids or grandkids, that’s success.”

Gore finds the reward in having patients who, on follow-up, say they have the energy to actually exercise or they no longer need insulin. “We really feel like we’re making a difference.”