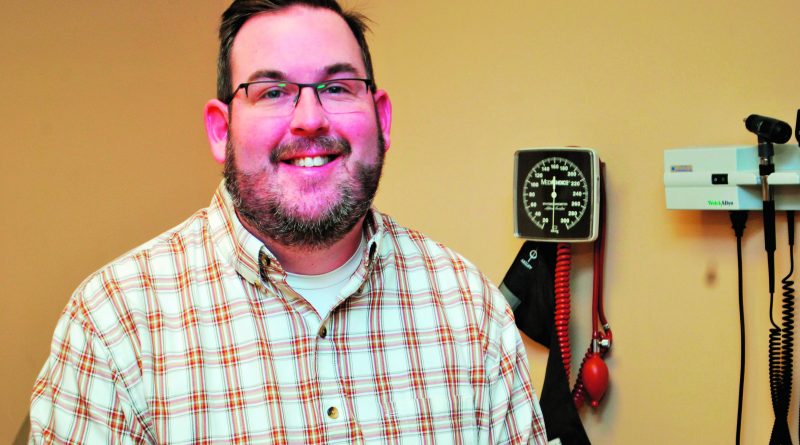 DANVILLE The appeal of working in a small, closely knit community, while also breeding and raising thoroughbreds with his wife, Kendra, was irresistible to Jared Hagaman, MD. So, Hagaman moved to Danville, purchased a horse farm, and joined the staff at Ephraim McDowell Regional Medical Center (EMRMC). “It was personal, as well as a professional decision,” says Hagaman, “I pick the horses and select the mating choices, but she manages the farm.”

After growing up near Dayton, Ohio, Hagaman attended Miami University in Oxford, Ohio, and then went on to graduate from the University of Cincinnati (UC) College of Medicine where he was also chief resident. In addition, he completed his fellowship in pulmonology and critical care at UC. In March of 2015, Hagaman began his role as a pulmonologist at EMRMC. As part of his critical care training, he also covers the intensive care unit.

Because there was lung disease in his family history, Hagaman’s connection and interest in critical care and pulmonology are personal and family-oriented. His mentor at UC, Gregory Rouan, MD, chair of the Department of Internal Medicine, also influenced his specialty choice.

Lung Disease and Tobacco Use in Central Kentucky

According to Hagaman, diagnostics have increased dramatically in recent years. Especially electromagnetic navigational bronchoscopy, which he states is a “fascinating technology that allows us to input a CT scan into a computer system which gives us a road-map through the airways to biopsy a tumor.” Endobronchial ultrasound, EBUS, is another diagnostic tool for Hagaman, which “allows us to biopsy the lymph nodes and tumors through the airways, providing more accuracy and safety because we can visualize the tumors.”

“The future treatment of lung cancer will be more individualized”— Jared Hagaman, MD

“We offer lung cancer screenings at Ephraim McDowell,” says Hagaman. These include low-dose x-ray and CT scans for their six-county patient coverage area. Counseling for tobacco cessation and other non-smoking aids are also offered.

The Future is Genetics and Customized Treatment

Though lung cancer is not necessarily a heredity disease like breast or colon cancer, Hagaman points out there are “several genetic mutations on specific tumors that we test for and certain chemotherapies that we target for those markers.” This leads to extracting as much tissue as possible for biopsies. “The genetic markers are sporadic.”

Hagaman is enthusiastic about new biologic agents and immune-therapies that are designed to counteract inflammatory genetic markers for asthma. He believes that the future treatment of lung cancers will be “more personal and individualized as immune-therapies for asthma and COPD become more prevalent. Targeting genetic mutations for lung cancer will be the wave of the future. Even in a small community, we offer that cutting-edge technology.”