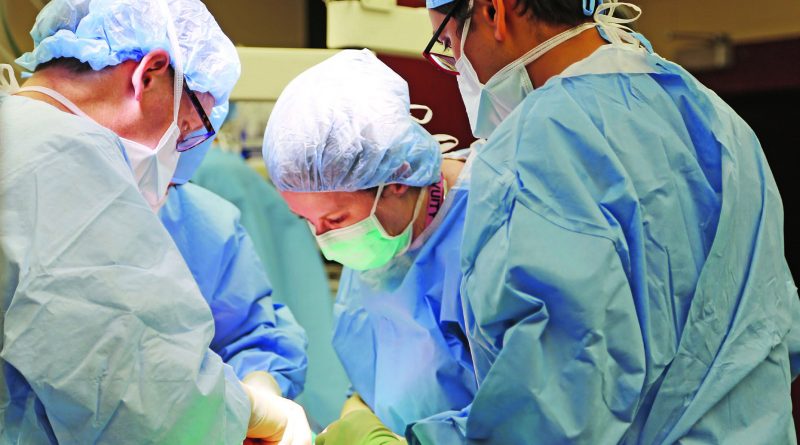 LOUISVILLE After watching her identical twin sister go through chemo and radiation therapies not once, but three times, Cherona Craig just wanted to do something. She opted to become a donor. And, on October 31, 2017, surgeons transplanted abdominal skin and fat from Cherona to her sister, Cheryl Adair, to create a new breast.

The surgical team consisted of plastic surgeons Michelle Palazzo, MD, and Donald Graham, MD, both from the Kleinert Kutz Hand Care Center; Terry McCurry, MD, from University of Louisville (U of L) Physicians; and four fellow surgeons. With a collaboration between the team and staff, the sisters’ combined procedures took place over a 14-hour timeframe. Each portion of the procedure was performed simultaneously in a double operating room at Jewish Hospital, part of KentuckyOne Health, with Craig’s surgery starting at 8:30 am and Adair’s at 11 am.

Adair, 47, was first diagnosed with breast cancer in 2009 at the age of 39. At that point, she had the cancer lump surgically removed from her right breast, followed by six weeks of radiation. Three years later, in 2012, she developed another tumor in her right breast. This time, Adair underwent a double mastectomy with reconstruction, followed by more radiation. With her twin sister by her side throughout her journey, Adair thought she had breast cancer behind her. Unfortunately, yet another tumor appeared in the skin of her right chest last year. Adair had to have more skin removed, as well as, chemotherapy. She battled infections and wound problems, and was ultimately left with the right half of her chest significantly deformed from scars and radiation. After recovering from her cancer treatments, Adair hoped to one day have her right breast rebuilt. Though she had never undergone any surgery, Craig felt the need to do something for her twin. Becoming a skin and tissue donor for a deep inferior epigastric perforator (DIEP) flap breast reconstruction, an advanced microsurgical technique that is used to rebuild the breast tissue lost during a mastectomy, was the one thing Craig knew she could do. This microsurgical technique has become an increasingly common way to reconstruct a breast from a patient’s own abdomen. This approach to breast reconstruction, being gentler, is preferred to older breast reconstruction techniques. However, using a twin sister’s abdomen to create a breast has only happened five times in the world. Palazzo, Graham, and McCurry worked in teams of two, additionally utilizing the skills of microsurgery fellows Laxminarayan Bhandari, MD, Katherine Fu, MD, and Uzair Qazi, MD, of the Christine M. Kleinert Institute; and plastic surgery fellow Nitin Engineer, MD, from U of L.

“In the operating room, images of blood flow to the abdominal tissue were visualized using a LUNA Fluorescence Angiography System, both before disconnecting the flaps from Craig and after connecting the flaps to Adair,” says Palazzo. “The right side of the abdominal flap flowed well, so it was connected first to Adair’s right chest. Using a double-head microscope and tiny instruments and needles, we sewed together blood vessels the size of spaghetti noodles with stitches the size of hairs. Once the right abdominal flap was successfully transplanted to Adair’s right chest, we could then cut away the damaged skin.”

Craig left the operating room around 6 pm and Adair before midnight. The sisters recovered together in a double room at Jewish Hospital and were discharged within three days. Since the twins are identical, there is no need for Adair to use immunosuppressive (rejection) medications, as in the case of other transplants.

This transplant surgery gave Adair back volume and shape to her breast. Craig will also benefit with an improved abdominal shape, much like a “tummy tuck.” Using fat from unwanted areas to transplant to her twin will produce a flatter, tighter abdomen. The twins continue to do well at home and have been seen weekly in the physicians’ office.

Using a twin sister’s abdomen to create a breast has only happened five times in the world.