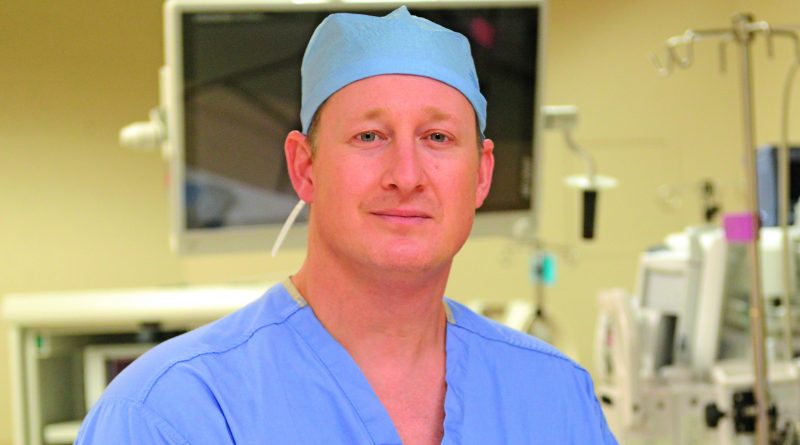 BOWLING GREEN Access. Access. Access. It’s been the rallying cry for years in healthcare reform. In Kentucky, and nationally, public health officials and primary care physicians, as well as some specialists, have worked to bridge the access gap for more rural populations. But what about highly specialized services? Traditionally, cutting-edge technology, ground-breaking research, or simply life-saving treatments for less common conditions have only been available at academic medical centers in the largest cities. At most, specialists would spend one day a month at satellite clinics in rural areas of the state.

It is rare that a multi-fellowship trained physician would actually relocate to a smaller city to start a program in something as specialized as neurosurgery. But, that is just what Todd Shanks, MD, has done. After nearly a decade of practicing in Louisville, Shanks left metropolitan life to join Western Kentucky Orthopaedic & Neurosurgical Associates (WKONA), a part of the Graves Gilbert Clinic in Bowling Green.

While Shanks enjoyed his work in Louisville, he says, “My personal vision is that I like a little more autonomy in the world I’m in, and the ability to control my direction. What was happening in Bowling Green, Kentucky, is what I saw the future becoming, which is large multidisciplinary physician groups developing.”

Graves Gilbert Clinic is a multispecialty physician group in Bowling Green, founded in 1937 and serving a 10-county area. Today the group comprises 170 physicians and over 30 specialties.

For Shanks, WKONA and its affiliation with Graves Gilbert not only offered the autonomy of a progressive model but was a chance to build a top-notch program impacting a large percentage of the population in Western Kentucky. “I was recruited to Bowling Green with the plan to develop a neurosurgical service line which offered more than what had been traditionally present here. It was the feeling of WKONA and Graves Gilbert Clinic that this was one of the areas of medicine which needed further development in this region. I looked at the demographics, and Bowling Green is the fastest growing city in the state of Kentucky over the past seven years. In the past four years, it demonstrated a 25 percent growth, and it’s projected to grow 25 to 30 percent over next four to five years,” he says.

Functional neurosurgery deals with the treatment of movement disorders, including deep brain stimulation, as well as epilepsy, cancer pain, and craniofacial pain syndromes. However, outside of academic medical centers, the volume for functional neurosurgery is typically not enough to sustain a practice, so the majority of Shanks’ practice is made up of brain and spine tumors, as well as degenerative spine diseases. While at Norton Hospital, he helped develop the multidisciplinary movement disorder team as well as collaborative efforts in epilepsy and brain and spine tumor. He was also the director of the surgical movement disorder program and co-director of the craniofacial headache program with Brian Plato, MD.

Within WKONA, Shanks is creating multidisciplinary service lines to meet the varying needs of patients. “We’re developing a brain and spine institute. What we have in spine is a compilation of physicians who do spine, who work together. When we have complex patients, we review and we conference them. We discuss current trends and what the latest data supports to do. We follow our outcomes,” he says.

In the field of movement disorders, Shanks has been instrumental in developing a movement disorder team with the recruitment of Amelia Mooney, PhD, a clinical neuropsychologist, from the University of Kentucky and Emme Igbokwe, MD. The team includes a physical therapy service line for different movement disorder pathologies.

Future plans are in the works for a craniofacial headache center, which is in the planning stages in cooperation with pain specialists and neurologists. Shanks is one of just a few neurosurgeons in the state fellowship trained to treat craniofacial pain.

The Team Drives the Tools

Shanks emphasizes that the multidisciplinary team shapes the way advances in technology are being utilized to identify the most appropriate treatment for patients, whether that is surgery or not. Brain tumors located next to critical structures pose complex challenges. He uses Brainlab navigation for real-time imaging and improved accuracy. “We use a compilation of techniques, including advanced intraoperative navigation and brain mapping to safely remove lesions. This is critical when lesions are close to eloquent structures and fiber tracts which can lead to unwanted deficits, if injured.”

Coming is the Medtronic Visualase® system, which Shanks describes as a “tissue laser ablation system for deep seeded intracranial lesion.” While radiofrequency ablation is not new, previous iterations lacked the ability to identify the size of the lesion or how different tissues respond to heat fields. With Visualase, surgeons use intraoperative CT to place a lead in the brain in the operating room. “Then we take the patient to the MRI scanner and do thermal ablation under MR imaging so we can actually destroy the lesion in real time, knowing how much we are doing.”

All of the technology and the team approach have one thing in common – “to cut down the inadvertent loops people go around to get appropriate therapy,” says Shanks.

I came down here to start this in Bowling Green because it was [WKONA’s] feeling that the caliber of neurosurgery had not been where it should be for a city of this magnitude. I looked at the demographics, and Bowling Green is the fastest growing city in the state of Kentucky over the past seven years.— Dr. Todd Shanks