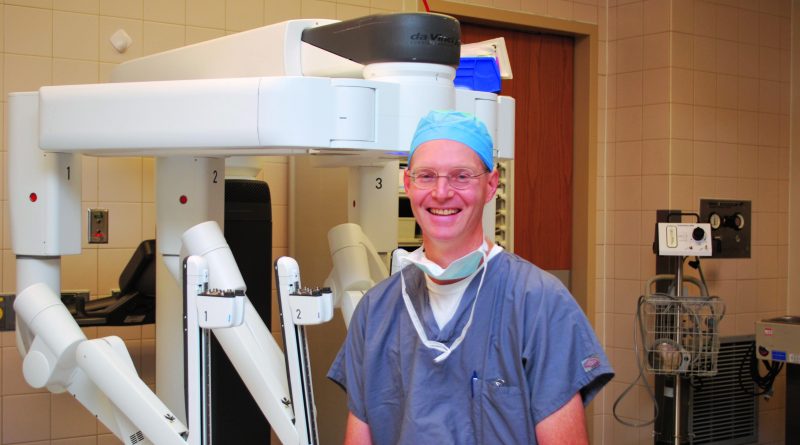 LEXINGTON There’s a lot to be said for shortening hospital stays. Besides the obvious reduction in expense, there are other significant benefits to patients, even those battling something as serious as colon cancer.

“It’s huge,” says John Dvorak, MD, of reducing hospital stays for patients. “There’s less exposure to getting infection here in the hospital. There’s a quicker return of patients to regular activities. Staying in a hospital for five days can be depressing, particularly if you’re stuck there on IV fluids and an NG tube in your nose. If we can avoid NG tubes, get patients up and moving right away, and feed them, their whole psyche and mental status is improved. And they are much more comfortable sleeping in their own bed.”

Dvorak, a colorectal surgeon with Colorectal Surgical and Gastroenterology Associates (CSGA) in Lexington, has seen these benefits first-hand. And it’s one of the reasons he has embraced robotic surgery for colon cancer patients. What used to be up to seven days in the hospital has now been reduced to just one in many cases.

“This is almost outpatient colon surgery,” Dvorak says. “There are surgeons in the country who are pushing for that.”

Dvorak comes from a long line of medical professionals. His mother and father are both pathologists, his grandmother was a family physician, and his grandfather was a surgeon. It was natural for Dvorak to follow that same path. He grew up in Boston and attended Colby College in Maine, then went to Dartmouth Medical School. He performed his general surgery residency at Harvard and a fellowship in colon and rectal surgery at Cleveland Clinic. He and his wife moved to Kentucky in 2001.

At CSGA, Dvorak and his colleagues treat an even mix of minor procedures such as fissures, abscesses, and hemorrhoids; major abdominal operations such as colon cancer, diverticulitis, and inflammatory bowel disease; and colonoscopy for screening and diagnostic purposes.

For most of his time in Kentucky, Dvorak has been performing minimally invasive laparoscopic surgery. Robotic surgery that was becoming popular for other procedures simply was not advanced enough for colon surgery.

“Early robotics were not really designed for colon surgery,” Dvorak says. “They were more for single-site surgery such as the prostate, uterus, or ovaries. We were left out of that revolution. There were technologies that we needed such as stapling, blood supply detection, vessel sealing devices, and multi-quadrant surgery that older platforms did not allow for. With the newer robotic machines, that’s all been solved.”

A little over three years ago, the advances in robotic technology drew Dvorak to begin training. Now, he has performed approximately 200 colon surgeries with the da Vinci Xi Surgical System. He said it took him about 18 months to learn the procedure well enough to be comfortable with it.

“In colon surgery we have to be in multiple areas of the belly at the same time, and it is more difficult to learn than some of the other robotic procedures,” Dvorak says. “It’s a long learning curve. But it’s only a matter of time before it’s going to become the norm.”

It will become the norm, he says, because of the clear advantages to both the patient and the surgeon. Patients have smaller incisions, lower infection rates, lower chances of hernia, overall less discomfort, shorter hospital stays, and quicker return to normal activity. For the surgeon, the robotic surgery provides greater access with less effort.

“The robotic system gives us a 520 degree range of motion inside the abdomen to move instruments to get into positions you just cannot using laparoscopy,” Dvorak says. “That’s better for the patient because it allows the surgeon to handle diseased tissue without excessive manipulation of normal tissue. From a surgeon’s standpoint, robotics helps us to preserve our body and prevent repetitive use injuries that surgeons can get from doing the same motion over and over again.”

In addition to treating cancer, Dvorak and his colleagues are working to help diagnose and prevent it as well. He points to increased awareness, as over 50 percent of those eligible for screening are getting a colonoscopy. “If you compare it to where we were 16 years ago – about 20 percent – that’s a big jump,” Dvorak says. “And it’s working! Colon cancer rates are dropping.”

The good news is that survival rates of patients with colon cancer are improving. Dvorak suggests there are two primary reasons for increased success: improvements in surgery and oncology. “Knowing the anatomy of the colon, having a specialty of colon and rectal surgery, and understanding the blood supply in a very accurate way allows us to do great surgery and give the patient the best chance of having no local recurrence long term,” Dvorak says. “And we have a host of different oncology medicines now, and patients are doing great. Even stage four patients, not all, but many, are getting out to five years. That’s amazing. A decade ago that was an 18-month death sentence.”

“When a patient is devastated with this disease and they think the world has just ended, I can see through a lens of time how that patient is going to walk through therapy – many times it is a year-long process – and where they will be at the end of that. I have to help them maintain a focus on where we’re going.”