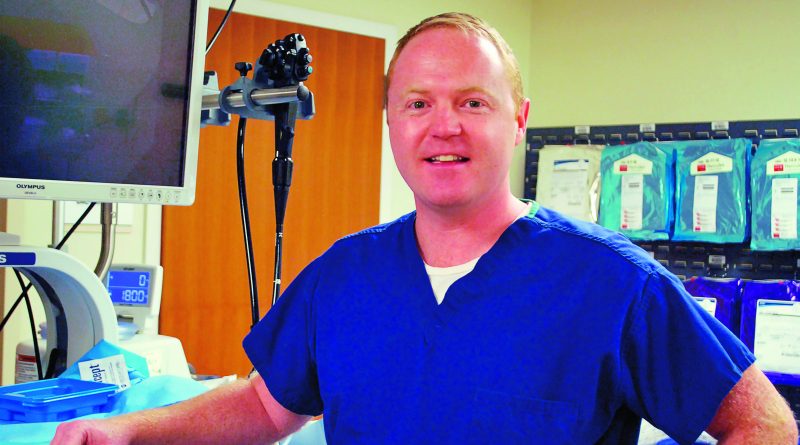 GEORGETOWN We all try to look on the bright side, and, in modern medicine, that’s relatively easy as advanced techniques and technologies produce increasingly successful results and reason for hope. Once deadly diseases become treatable, once chronic conditions become more manageable. But such is not the case with pancreatic cancer. At least not yet.

“It’s the fourth leading cause of cancer death in the US,” says Justin Case, MD, gastroenterologist at Georgetown Community Hospital’s Gastroenterology and Hepatology of the Bluegrass. “It’s thankfully not common, but it’s just that it’s so deadly.”

It’s the cancer’s insidious nature that makes it so lethal, Case says. Pancreatic cancer is found most often in patients in their 60s and up. By the time the patient suspects something is wrong, it’s quite often too late.

“Most people present with painless jaundice,” Case says. “It’s kind of an insidious onset unfortunately. Other things are weight loss, loss of appetite, or becoming diabetic out of the blue. A sudden presentation of diabetes becomes concerning among elderly patients because most adult onset diabetes occurs in the 40s or 50s.”

What makes pancreatic cancer so deadly is how quickly it metastasizes. The tumor might be as small as a centimeter when it is discovered, but may have already metastasized. The liver and lymph nodes are common secondary sites for the cancer’s spread.

“Even if it is not visibly advanced on the staging techniques we have, it actually has already metastasized,” Case says. “We just have not been able to identify the metastasis yet.”

Case identified gastroenterology as his field while at the University of Cincinnati College of Medicine. A native of Grant County, Ky., Case attended the University of Kentucky for his undergraduate degree and his residency. He completed three years of gastroenterology fellowship and a year of advanced endocopy at Cincinnati. He joined the team at Georgetown Community Hospital in August 2013.

In addition to his expertise, Case also carries a level of optimism to his role at Gastroenterology and Hepatology of the Bluegrass. Pancreatic cancer is hard to beat, but it does happen.

“Only about five percent will be living within five years of diagnosis, so the prognosis is poor,” Case says. “But thankfully somebody gets to be the one out of 20 that survives.”

Case’s role in helping make that happen generally starts with a patient who has become jaundiced or has other symptoms of pancreatic cancer. The primary care provider or a radiologist will obtain an image identifying the mass or obstruction of the bile duct. Then, Case will perform the tissue diagnosis, generally from an endoscopic ultrasound biopsy or a fine-needle aspiration of the tumor itself.

With a patient with jaundice, Case will usually stent the bile duct for drainage and symptomatic relief. Then, the patient moves on to chemotherapy and radiation and, potentially, surgery.

“Most pancreatic cancer occurs in the area next to the bile duct,” Case says. “It usually presents as obstruction of the bile duct. That’s when jaundice occurs out of the blue. If you get jaundice in a very short period of time without pain, it’s scary for sure.”

“It’s something that we don’t have any good screening tools for yet,” Case says. “People that have recurrent acute pancreatitis and chronic pancreatitis are at increased risk, and there are certain cancer syndromes that might increase risk, but most patients don’t fall into those groups.”

Case says that multiple modalities are used to stage people before they receive a final treatment plan. Tumor markers based on the biopsy of the primary lesions, as well as any lymph nodes that might be around it, along with PET and CAT scans, are the most helpful screening tools.

Ultimately curing pancreatic cancer involves surgery, Case says. Generally only a portion of the pancreas needs to be removed. That isn’t the biggest threat to the patient. The fear is that it’s already too late.

“Often times the cancer unfortunately has progressed too much,” Case says. “It’s such an aggressive tumor; it spreads beyond our staging techniques. Even if it appears it has not, it usually has.”

Despite its severity, pancreatic cancer does not receive the media attention and public awareness that many other forms of cancer do.

“It’s unfortunate, but I feel like it gets pushed to the wayside because the patients are more elderly and expected to have health problems,” Case says. “The other thing is that it’s so deadly, it’s something people don’t want to talk about.”

But there are physicians working hard to fight it. There are survivors. Research and advancements will continue. There is always a bright side.

It’s such an aggressive tumor; it spreads beyond our staging techniques. Even if it appears it has not, it usually has.— Dr. Justin Case