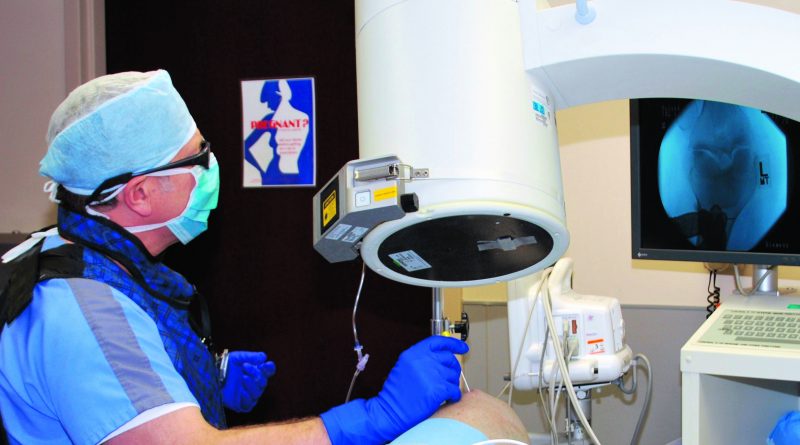 LEXINGTON After nearly 25 years of medical training and practice, Karim Rasheed, MD, knows a game changer when he sees one. Its the next generation of spinal cord stimulation (SCS), and it is just months away from FDA approval and being in the hands of interventional pain management physicians such as Rasheed.

The new and exciting development for treating complex regional pain syndrome (CRPS), both I and II, is the Axium™ Neurostimulator System from St. Jude Medical, Inc. The device has passed clinical trials and is expecting final FDA approval within the next few months. The Axium radiates dorsal root ganglia (DRG), collections of sensory nerves that run alongside the spinal column. According to the St. Jude Medical website, “DRG stimulation is a first-of-its-kind therapeutic approach that provides pain relief to patients with neuropathic conditions underserved by traditional spinal cord stimulation.”

While spinal cord stimulators have been the gold standard for years in treating neck and lower back pain, they are less effective when treating CRPS and certain areas of pain such as in the limbs. Research has found that the DRG is the specific region of the spinal cord that transmits the pain. The smaller and more precise leads are placed over the dorsal root ganglia, which affords more targeted pain blockage and control.

“We have many patients who are waiting for this treatment and relief,” says Rasheed.

Rasheed came to the University of Kentucky Medical Center in 1993 where he did his internship in internal medicine and took his residency in neurology and anesthesiology, followed by a fellowship in pain management. Then he spent several years in private practice, which included four years treating veterans at the VA Hospital in Lexington, where he says the “patients are so appreciative.”

According to Rasheed, the clinic sees the most common presentations of pain in the neck, back, lower back, shoulders, hips, knees, and ankles; also muscle and myofascial pain, headaches, some cancer pain patients, and injury to nerves in arms and legs. A rare occasion is oral-facial pain, when a patient is referred by their dentist. Rasheed’s practice is limited to adults, with slightly more male than female patients. Those under the age of 45 are more likely to have acute pain from trauma, while patients over 50 years old typically suffer from osteoarthritis and degeneration of the spine, joints, and other extremities.

“We offer comprehensive pain care, which includes medical management, sometimes a mixture of opioid and non-opioid treatments, also interventional nerve blocks. We often see patients who have a ‘flare up’ of pain,” says Rasheed. “They tell us to treat the flare-up, and they can manage after that.”

Rasheed still does some anesthesia in the OR but enjoys the patient interaction and both the challenges and rewards of pain management. His clinic also offers physical therapy to help patients become more functional.

The Progression of Pain Management

To illustrate just how far pain management has come, Rasheed gives the example of pain relief in childbirth. “Fifty or sixty years ago it was thought that women had to have pain to deliver babies, that it was part of the process. Now we understand that women can give birth without extreme pain, and it’s better for both the baby and the mother because she is not so exhausted from the pain of labor contractions.”

Another example of advancement is that of genicular nerve ablation. An ardent and early practitioner of the technique, possibly the first in the Central Kentucky area, Rasheed says the potential for genicular nerve ablation has been around for decades, but physicians only recently discovered its use. Genicular nerve ablation warms and de-sensitizes the nerve that transmits knee pain. The process can give patients pain relief for six months to a year. Rasheed’s success rate is 70–80 percent, which he considers “a great success.” Many patient referrals come from orthopedic surgeons, who want a conservative approach before partial or total knee replacement is engaged.

“Genicular nerve ablation may postpone surgery for years,” says Rasheed, “and that is preferred by some patients and by their orthopedic surgeons. We test a patient’s response, one nerve at a time, to see what kind of results we get. Each patient and each knee is different.”

The preferred candidate for genicular nerve ablation is a 40–65 year old with osteoarthritis or someone who has had knee replacement surgery or acute trauma but still has pain. Less optimal candidates suffer pain from damaged ligaments, muscular aches, or diffusion and swelling of the knee capsules.

For back and neck pain, Rasheed notes that tremendous advancements are being made with radio frequency ablation and spinal cord stimulators, which act like a pacemaker for the brain and spinal cord. With an implanted spinal cord stimulator, a patient can control the amount of relief and the location of the pain. “Change the channel and increase or lower the volume, according to the location and the level of pain,” says Rasheed. “The patient is in control of the pain, rather than the pain being in control of the patient.”

Alternative Medicine and the Difficult Patient

Pain medicine and management is a controversial specialty with many skeptics, Rasheed acknowledges. Some patients with some types of pain, typically myofascial, will respond to acupuncture. Rasheed is skeptical about over-the-counter herbal supplements because there is simply not enough scientific evidence or controlled dosage to demonstrate efficacy.

“Some of my patients are resistant. I tell them, ‘I am the coach, but only the coach. You are the player who can win the game if we do this together.’”

A difficult patient, says Rasheed, is one who hides his pain because of fear and shame and is resistant to treatment. “I have to dig into that patient’s pain to help him using multiple modalities, such as anti-neuropathic medications, muscle relaxants, anti-depressants, injections, spinal cord stimulators, and physical therapy to get him functioning again in society.”

All of Rasheed patients receive a psychological evaluation, and some receive therapy. “For some patients there is a stigma about going to a pain clinic. This is unfortunate because not all patients receive opioids at a pain clinic. In fact, we go out of our way not to prescribe narcotics,” he says. Multiple modalities are used such as injections of nerve blocks, spinal cord stimulators, a mixture of non-opioid medications, physical therapy, psychological counseling, and encouraging lifestyle modifications.

Chronic pain is a disease that can lead to other morbidities such as hypertension, lowered immunity, chronic bowel syndrome, and depression, among other ailments. Anxiety and stress can manifest as pain. “Our job is to find patients who are ‘diamonds in the rough,’” says Rasheed. “Those are people who have pain but want to get back to work, to family, to functioning in life.”