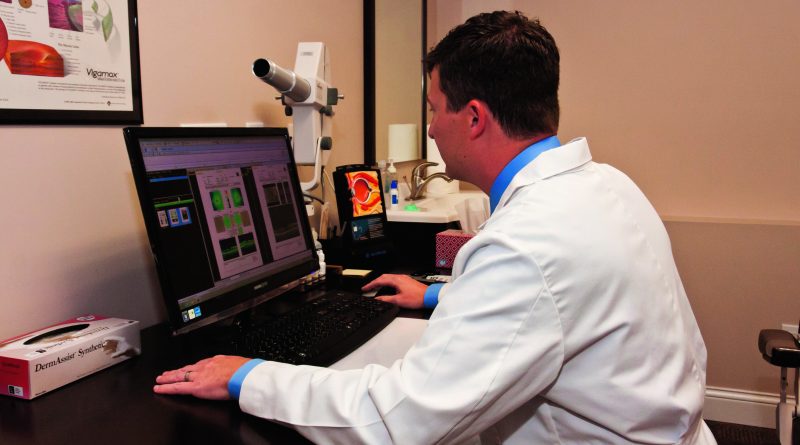 GEORGETOWN Born into a family of engineers, musicians, and optometrists, William Wallace “Chip” Richardson, MD, was nurtured in technology, performance, and a curiosity for the eye and its abnormalities from childhood. It is through the hard-working application of all of these skills that Richardson has been able to do something almost unheard of in today’s medical environment – build and grow a solo ophthalmology practice in Central Kentucky, specifically in Georgetown. In medicine today, almost all doctors, when they finish their residency or fellowship, join an established large group or are employed by a hospital or healthcare network. Richardson’s story is intriguing and complex, but he keeps coming back to one mantra, “I thought, if I just keep working as hard as I can, it will happen.” Well, he did, and it happened.

Richardson, with his wife Candy as office manager, now operates a thriving private practice – Georgetown Eye Care. The practice employs a second ophthalmologist, James Gullett, MD, a graduate of the University of Kentucky ophthalmology residency; optometrist Stefanie Adams, OD, a graduate (cum laude) of the Illinois College of Optometry; and 12 office staff, including technicians and opticians. As a group, they provide eye care to a patient population of all ages from Georgetown and Scott County, including employees from the Toyota plant, as well as patients from surrounding areas such as Grant, Bourbon, and Harrison counties, and the stretch of land between Georgetown and the catchment area of the Cincinnati Eye Institute.

Currently, the practice sees about 80 patients a day. Richardson describes his established patient population as very loyal with some former residents of Georgetown still returning for their annual visits from their new homes many states to the south. In conversation with Richardson it is easy to understand this loyalty. He is passionate about this practice, and the practice is all about the patients.

Hard work and the delight in hard work must be in Richardson’s DNA. He attended Ohio State University’s Honors Program, but was restless. When a professor there told him he was going to grade “Ivy League” tough, Richardson said to himself, “Hmm, if I’m going to be graded like Ivy League, I might as well go Ivy League,” so he transferred to Cornell University and graduated with a BA in science. Cornell’s issuing an arts degree to a science major is not an idiosyncrasy. They are telling the world that their science grads are well steeped in the humanities. Richardson shows the lasting effects of this education in small ways, like keeping a book of poetry on his desk, and large ways, like compassionate and personal care for every patient and dedication to restoration of the Choctaw Academy, an historic Native American school that operated in Scott County from 1825–1848.

Richardson returned to Ohio State for his medical degree. There, he did two years of cardiology research studying intravascular ultrasound. He committed to an internship in Columbus, followed by 2 years of NIH-sponsored research at UK – studying the neural control of the muscles of facial expression. An ophthalmology residency at UK marked the final phase of his formal training. During residency, Richardson distinguished himself as a dedicated fast learner and careful surgeon. With time his colleagues discovered some of his other talents, such as, if a piece of equipment malfunctioned and manufacturer’s support was not available, Richardson fixed it. If IT support could not solve a computer issue, Richardson fixed it. It is no surprise then that as he built Georgetown Eye Care, there was no need to hire a network consultant to set up the computer network, and when a piece of biomicroscopy had an electrical failure, no one had to call the supplier and wait for help. Richardson took apart the circuit board, diagnosed the problem, fixed it, and corrected the design defect in all the other biomicroscopes as well. It is impossible to overstate what a valuable and unique set of skills Richardson brings to the development and maintenance of his practice.

Richardson recollects choosing a location for his practice on the age-old adage – location, location, location. He wanted to be within walking distance of the hospital and in an area that was growing commercially. He found the ideal piece of land and bought it, despite the seller emphasizing the location and setting the price accordingly. The property was excavated and the building completed in 2007. The next step was to purchase and set up the large number of complex and expensive pieces of equipment necessary to start an ophthalmology practice. On the day the equipment was delivered but had not yet been installed, Richardson was concerned that his investment was sitting in crates with handles, far too easy a target for theft. His solution was to put an inflatable camping mat in an exam lane and spend the night on the office floor. While that may seem a little bit over the top to some, to Richardson it’s just one of the little things he has to do as a solo practitioner.

Successfully establishing a patient population from scratch as a solo practitioner, Richardson points to a couple of key networking philosophies. “Very active involvement with area primary care physicians and a strong presence in hospital affairs were crucial for me. I still thank the primary care doctors in this community every day. What it really comes down to is satisfied patients and word of mouth,” he says. It took Richardson about 18 months in practice before he began to believe the practice would make it. “From then until now I have been confident. I could still manage a 20 percent increase in patient volume with my current staff and space. If and when I get more than that I will take on more staff, hire another optometrist or perhaps another ophthalmologist, and I will expand the space,” he adds, while stressing an integrated eye care team.

Not one to be intimidated by developments in ophthalmology coming in the future, Richardson says, “A number of my colleagues are looking for ways to block the advancement of telemedicine. The Kentucky Board of Optometry has already deterred their licensees from signing off on any telemedicine examinations or any refraction (assessment for glasses or contact lenses) not done face to face. I disagree with this stance. I am looking forward to finding out how we can use telemedicine in the future to deliver better eye care to everyone,” he says. Richardson does not deny the challenges of interstate licensing, the need for health maintenance exams, and determining reimbursement, but he points out that refractions are currently covered by very few third party payors, including Medicare.

When asked what one thing he would like to convey to the lay public about ophthalmology, Richardson says emphatically, “Ophthalmologists go to medical school.” As medical doctors, ophthalmologists differ from optometrists and opticians in training and in their ability to perform surgery and diagnose and treat all eye diseases, as well as correcting vision. “Sadly, our legislators were careless in 2011 when expanding surgical privileges to optometrists. They especially need to understand the importance of medical school and the need for equivalent training for patient safety.”

For healthcare providers, Richardson describes recent advances in ophthalmology: “There are really two treatments that have undergone revolutionary development in the last five to 10 years. First, is that macular degeneration and diabetic retinopathy can now be treated very successfully and noninvasively. Macular degeneration is no longer a certain sentence to visual loss. Second, is the ability to correct refractive errors, such as astigmatism, at the time of cataract surgery thus minimizing the need to wear anything but reading glasses afterwards.” Richardson describes the ability to examine the retina with ocular coherence tomography as the biggest technical achievement in ophthalmology in the last decade. “This piece of equipment, which I use in the office every day, gives us a three dimensional image of the retina down to the micron level, allowing the identification of abnormalities much earlier and more precisely. I would use the term miraculous to describe the capability of this technology,” he says.

Richardson believes the biggest challenges facing ophthalmology in the next five to 10 years are the same ones facing all of medicine. “Despite clear cut evidence that organizing physicians into large groups does not save money, I anticipate further efforts to do so. My biggest concern is not the financial and lifestyle impact these changes will have on doctors, it is the impact these changes will have on patient care. These are huge challenges, my hope is that the medical profession will remain cohesive enough to face them together instead of lone voices calling out from the wilderness,” he says.

While his rallying cry may be for physicians to come together with one voice, Richardson is proving that physicians can be successful in a solo practice with enough hard work, determination, and a little technical know-how.

I thought, if I just keep working as hard as I can, it will happen.–Dr. William Wallace “Chip” Richardson 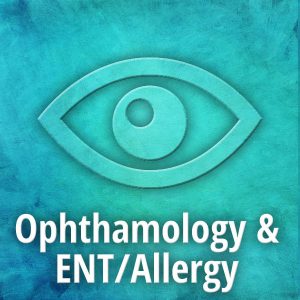