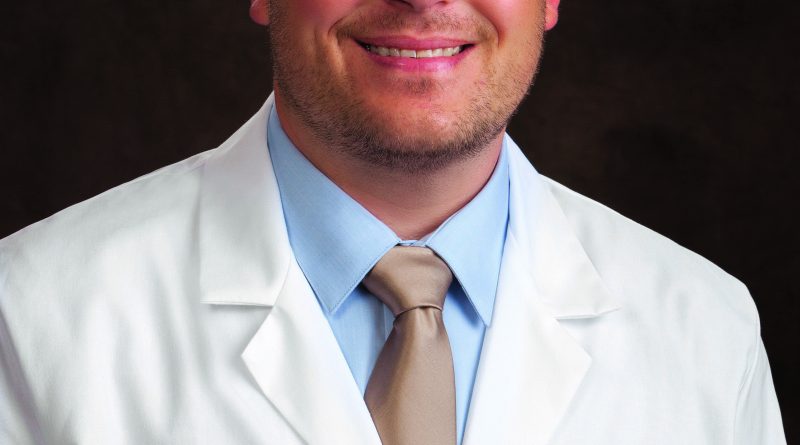 OWENSBORO You might call Jacob Hodskins, MD, MS, a born problem-solver. Not because he has the solution to every problem, but because, as long as he can remember, he’s had a desire to find answers. And one of the first big questions he had was about why people got sick and how it could be prevented.

“My Papaw died of lung cancer when I was young,” Hodskins says. “I saw the deterioration and how it changed him mentally and physically. From that moment forward, cancer became the ultimate enigma. I started keeping scrapbooks of all the newspaper articles I could find pertaining to oncology and knew at a really young age, my life would involve caring for cancer patients in some form.”

Another event that piqued his interest came in his early teens when he developed a profound anemia. Multitudes of tests and numerous bone marrow biopsies revealed no answers. Blood transfusions became a way of life. The process continued for months. “They never could figure it out,” Hodskins says. “As talks of bone marrow transplant loomed, I naturally became invested in the hematology side of things. I had a great pediatric hematologist at Kosair who encouraged me to review my records and labs. I remember researching all that was happening. My parents always encouraged me to be inquisitive and involved throughout the entire process and were the catalyst behind my dedication to this field and patients like myself.”

What was going on was the forging of Hodskins’ career path. Raised in Owensboro, Hodskins attended Transylvania University, then went to graduate school at the University of Kentucky, receiving a master’s in molecular physiology, researching transcription factors in brain tumors. Afterward, he attended the UK College of Medicine. He further completed his residency in the UK Department of Internal Medicine and then his fellowship at the UK Department of Hematology, Bone Marrow Transplantation, and Medical Oncology, serving as a chief fellow in 2015–16.

Hodskins has since returned to Owensboro, joining Owensboro Health in July 2016. Specializing in hematology and oncology, Hodskins is now looking for solutions to patients’ blood and cancer problems every day.

One of the solutions that Hodskins finds encouraging is the increasing use and success of newer immunotherapy agents alongside chemotherapy. “For most oncologists, trying to manage cancer while avoiding the toxicity of chemotherapy is always an ambition,” he says. “Traditional chemotherapy can have significant short and long-term effects, even years after a cure. Additionally, many frail, elderly patients or those with concomitant medical conditions are often forced to forgo cancer treatment or receive sub-standard therapy due to poor tolerance and potential for toxicity. Immunotherapy is showing headway in restructuring not only how we think about cancer management, but also who we think is appropriate for treatment. It’s not that immunotherapy has no potential toxicity, but in general it’s better-tolerated than traditional chemotherapy. It’s a step in the right direction and with each step along the way, we’re extending survival or disease-free intervals in ways that we’ve never really seen for a number of cancers.”

Currently, immunotherapy is a viable treatment option with good results in a wide variety of cancers, including some hematologic malignancies and lung, genitourinary, and skin cancers, among others, according to Hodskins. As studies are conducted and more data is collected, Hodskins believes that immunotherapy will undoubtedly be used more widely. The newer immunotherapeutic drugs are mostly utilized in the chemotherapy refractory setting. However, innumerable ongoing clinical trials are reporting the benefit of earlier use in several situations, Hodskins noted.

Immunotherapy got its modern day jump start as a front line treatment for melanoma, where the results have been very encouraging. “We’ve seen some absolutely dramatic responses in the metastatic melanoma setting for example,” Hodskins says. “Witnessing patients, who have a disease that was until recently deemed ‘untreatable,’ show near complete responses to well tolerated drugs is very powerful and convincing.”

Another example highlighting the benefit of immunotherapy is in heavily pretreated Hodgkin’s lymphoma. A common treatment for refractory disease is autologous stem cell transplant. If that doesn’t work, further options have been lacking in the past. “Now these people are getting much longer survival and having really good response to the immunotherapy drugs when they fail transplant,” Hodskins says. “Before there was very little to offer the patient. Now you have something you can offer that has a beneficial outcome and a low toxicity profile, even in patients who have received a lot of chemotherapy.”

And Hodskins is also happy that other aspects of cancer management are expanding as well. “Oncology essentially pioneered the use of clinical trials to ascertain how and whom to treat with sufficient evidence to support your decision. The everyday problem is that if you look at the design of a clinical trial, you see a lot of times, the patients they select are not the typical patient who walks in my office,” Hodskins says. “It can be daunting to formulate a treatment plan, with confidence, for a patient population that wasn’t represented in clinical trials. All too often, the patients we see are ‘sicker’ or have other problems that would have excluded them from being treated on a given trial, making it hard to guarantee they will see the same type of outcome reported from those studies. While the knowledge we gain from trials is absolutely paramount to the way cancer is treated, newer initiatives are finding a way around some of the pitfalls experienced in everyday care.”

For example, the American Society of Clinical Oncology (ASCO) has launched an initiative to help collect treatment data and outcomes from everyday cancer patients in real world practice, off of clinical trials. ASCO’s CancerLinq™ is a database through which medical information is being collected from hundreds of thousands of real life cancer patients. “The ultimate goal is that I can enter characteristics about a certain patient and immediately get information about how similar patients have been treated and what the outcome was with each successive line of therapy. Real-time ‘second opinions’ about how those patients fared will help us to better educate our patients about the expectations moving forward in their treatment. I think it may have an impact on all practicing oncologists and improve our understanding of cancer alongside clinical trials.”

It seems with each step along the way, we’re extending survival or extending disease-free intervals in ways that we’ve never really seen before.— Dr. Jacob Hodskins