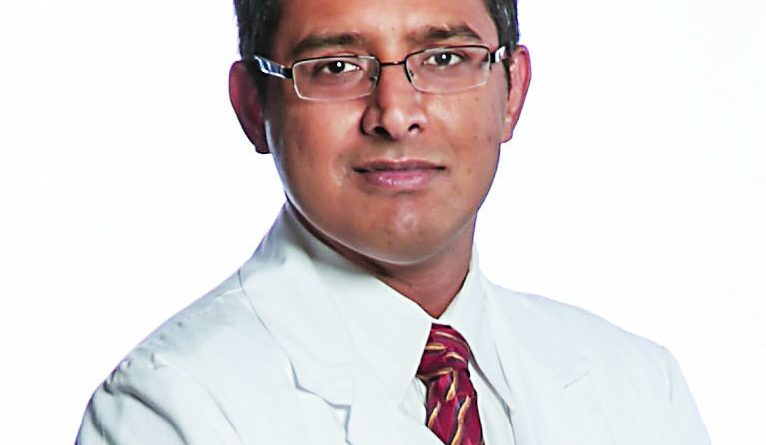 LOUISVILLE Five million people in the United States suffer from atrial fibrillation (AF), a heart condition where the upper chambers of the atrium beat too fast and with irregular rhythm. Individuals with AF have a five times greater risk of stroke, and 20 percent of all strokes are caused by the condition.

With that number expected to double in the next 20 to 25 years, Rakesh Gopinathannair, MD, MA, FHRS, director of cardiac electrophysiology, University of Louisville Physicians and KentuckyOne Health, is excited to be heading up the medical team that is bringing the newly approved WATCHMAN Left Atrial Appendage Closure (LAAC) Implant to Jewish Hospital, one of the first hospitals in Kentucky to offer the device.

Atrial fibrillation can cause blood to pool and form clots in the left atrial appendage (LAA). For the vast majority of patients with non-valvular AF, the LAA is the source of the stroke-causing blood clots. If a clot forms in the LAA, it can significantly increase one’s risk of having a stroke.

“AF-induced strokes are more devastating than other strokes because the clot can be much larger and travel through the bloodstream to the brain and other parts of the body, which causes the death rate to be almost double that of a regular stroke,” states Gopinathannair. “The risk of these strokes depends on associated conditions, including elderly age, heart failure, high blood pressure, diabetes, and prior strokes. For patients with non-valvular AF who have reasons to seek an alternative to blood thinners such as warfarin, the WATCHMAN Implant offers a potentially life-changing treatment option that could free them from the challenges of long-term anticoagulation.”

Because lifelong blood thinner use has many limitations, including excessive bleeding, falls, inability to keep the blood thinned adequately, and the general risks of being on a medication for an extended amount of time, the WATCHMAN is a solid solution for AF patients. “The device truly provides physicians with a breakthrough stroke risk reduction option for patients that are fighting AF,” says Gopinathannair.

Gopinathannair and his team will perform the implant of the new device in the cardiac electrophysiology (EP) lab with the patient under general anesthesia. An IV is placed in the groin through the femoral vein and a transseptal puncture makes a small hole through the membrane that separates the upper chambers of the heart, allowing entry into the left atrium or left upper chamber of the heart. The device can be threaded in through that IV. A transesophageal echocardiogram is then used to measure the size of the appendage.

“Appendages are like the lines in our hands – everyone’s are different and come in various sizes and shapes,” states Gopinathannair. “Once the size, dimension and depth of the appendage is confirmed, we select the particular size of the device and use a catheter to deploy the mechanism.”

The one-time procedure takes about one to one-and-a-half hours to complete, and patients typically need to stay in the hospital for 24 hours. Patients are able to be completely free of blood thinner medication three to six months after the implant is put in place. Research has shown that the WATCHMAN is as effective as or more effective than blood thinners in preventing AF-induced strokes. “Bleeding and falling issues associated with warfarin therapy are taken out of the equation, and that is life-altering for these patients,” adds Gopinathannair.

Patients with a moderate or high risk of stroke from AF who are unsuitable for long-term anticoagulation are the best candidates for the WATCHMAN, and risk of the procedure is very low. “The overall risk of the WATCHMAN procedure is about one to two percent. Anytime you work with IVs inserted into the groin area and in the left atrium, especially with the patient on blood thinners, there is a higher risk of bleeding and blood collection around the heart, but it’s very little,” states Gopinathannair.

KentuckyOne physicians will implant the first WATCHMAN device in mid-September, and it couldn’t come sooner.