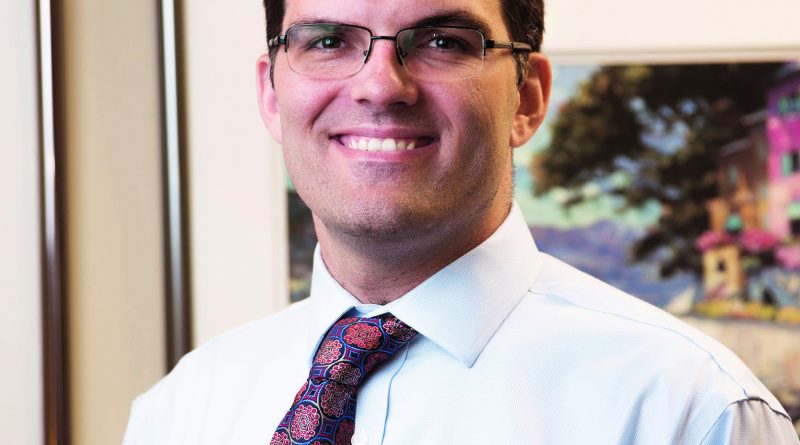 LOUISVILLE Unlike some vascular practices that specialize solely in vein care or minimally invasive interventions, Surgical Care Associates of Louisville is one of the most experienced teams in Kentucky, offering a comprehensive range of medical, endovascular, and surgical treatments for every type of vascular disease in their offices on Kresge Way and at Baptist Health Louisville.

“Traditional vascular surgery is the care of any blood vessel – arterial, vein, or lymphatic – that occurs outside the ones intrinsic to the heart and intrinsic to the brain,” says Noah Scherrer, MD, the newest vascular specialist at Surgical Care Associates, who joined the practice in early August 2016. For Scherrer, the practice’s philosophy matches his own ideals. “One of the reasons I chose vascular surgery was the opportunity to treat all aspects of vascular disease with all different modalities,” he says.

Each of the seven vascular surgeons at Surgical Care Associates practices general vascular surgery, while some do have special areas of interest. The group also employs one interventional radiologist and one nurse practitioner. While the practice has its own in-office vascular diagnostic center accredited by the American Association for the Accreditation of Ambulatory Surgery Facilities (AAAASF) and vascular laboratory certified by the Intersocietal Accreditation Commission (IAC), the group also works closely with Baptist Health Louisville, serving as the medical directors of Baptist Health’s noninvasive vascular laboratory and performing surgery at the hospital. Procedures are performed in Surgical Care Associates’ office-based Outpatient Endovascular Center or at Baptist Hospital Louisville, depending on the complexity of the intervention.

When it comes to arterial disease, the main conditions Scherrer and his colleagues see are arterial aneurysms, arterial occlusive disease (blockages in the extremities due to peripheral artery disease), and carotid artery disease.

Arterial aneurysms, such as abdominal aortic aneurysms, often go undetected, but once they reach a certain size they must be treated to prevent rupture. Arterial aneurysms can be treated endovascularly and surgically. Endovascular stent grafting is a minimally invasive approach that utilizes a fabric tube and metal mesh stent to seal off the aneurysm and strengthen weak sections of the artery.

In some cases the anatomy of the aneurysm precludes surgeons from using an endovascular approach and surgery is warranted. “The old aneurysm repair is very durable, but patients have a longer recovery, usually staying in the hospital for five to seven days. With endovascular repair, if the anatomy is suitable, patients can leave the next day and are almost back to normal within a week,” says Scherrer.

Other common conditions, such as arterial occlusive disease and carotid artery disease, can be treated medically, endovascularly, or surgically. Of medical therapies, Scherrer says, “Statin medicines, like Lipitor and Crestor, have really shown benefit for not only heart circulation but our peripheral vascular circulation.” Endovascular repair of blockages in the extremities includes balloon angioplasty with stent placement to open up the artery. Surgical Care Associates also offers laser arthrectomy, which cleans out the blockage rather than just pushing it aside. Again, the anatomy plays a role in whether an endovascular approach is an option. If not, surgeons perform surgical bypass using a piece of vein or an artificial graft. Surgical treatment of carotid disease is called a carotid endarterectomy.

Another large area of concentration for the practice is the creation and management of hemodialysis access for the dialysis-dependent renal failure patient. This involves surgery, usually on the arm, called an arterial venous fistula creation or arterial venous shunt placement, where blood is re-routed close to the skin surface. This allows the dialysis center to access the patient’s blood on a regular basis and connect to the dialysis circuit, providing the lifesaving renal replacement that the patient needs.

The Varied Nature of Venous Disease

DVT, when a blood clot forms in a deep vein, can cause complications in the leg that can lead to amputation, as well as pulmonary embolism, which can be life-threatening. “We have a number of products at our disposal in the operating room to suck the clot out physically or break it up through other mechanisms,” says Scherrer. Among the most effective techniques is catheter-directed lysis. “If it’s a significant DVT, we can access the vein in a number of locations and put a catheter through the clot that secretes a clot-busting medicine that works to reduce the clot much faster than traditional methods.”

Another new technology, the EkoSonic® Endovascular system with Acoustic Pulse Thrombolysis™ treatment, combines ultrasound waves with the administration of tPA (clot-busting medicine) to break up clots more quickly. “EKOS® has shown that by applying the ultrasound waves versus just the tPA, you can actually reduce the amount of medicine you give and reduce treatment time,” says Scherrer.

With diseases that can result in fatal consequences, vascular treatment alone is not enough. A large part of Surgical Care Associates’ practice is diagnostic screenings to detect conditions early, including abdominal aortic ultrasound to detect aneurysms, carotid duplex for stroke prevention, and ankle-brachial index (ABI) to detect peripheral artery disease.

The practice is also active in clinical research trials for the management of peripheral vascular disease, allowing them to be on the leading-edge of new treatments and technology.

Whatever the vascular concern, Surgical Care Associates has an approach tailored to fit the patient’s anatomy and individual needs.